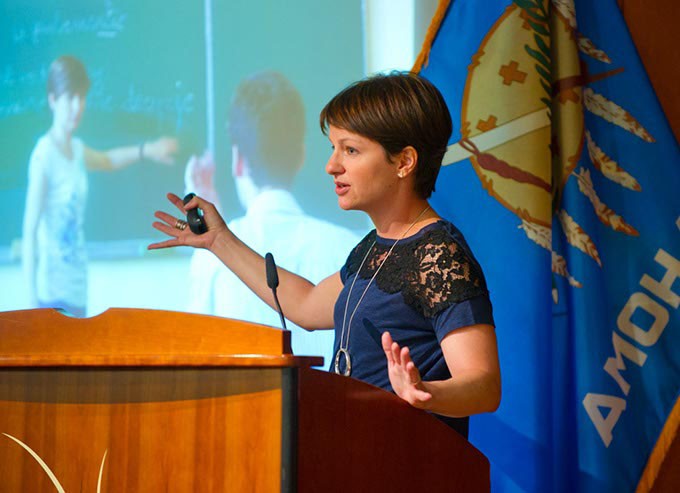 Is school in America too easy? Amanda Ripley thinks so.

The author of “The Smartest Kids in the World,” a best seller that tracked American foreign exchange students in some of the world’s best school systems, told an audience of education leaders Thursday that her research indicates the U.S. education system lacks rigor, focus and drive.

“I know you are sick of this word,” Ripley said about “rigor.” “But I could not get around it.”

The Teachers Matter program, hosted by Stand for Children Oklahoma and the Inasmuch Foundation, welcomed Ripley as the keynote speaker, along with the superintendents of the state’s two largest districts - Tulsa and Oklahoma City.

Ripley said her 2013 book began as a project aimed at discovering what was different in countries that have recently passed the United States in virtually every academic benchmark.

“I kept hearing about these countries that were supposedly so amazing in their education outcomes,” Ripley said. “Finland had a 10 percent graduation rate in the 1950’s ... and they are at 95 percent today.”

Ripley said she discovered America’s students were smarter today than in previous generations, but the growth rate was nowhere near the pace of almost every other developed nation.

In her book, Ripley followed a student from Sallisaw who spent a year of high school in Finland. Like many countries Ripley studied through the eyes of a foreign exchange student, Finland had high standards not just for curriculum but teachers. Admittance to teacher preparation programs in Finland is challenging and the teaching profession is viewed as a prestigious career.

“Whatever you end up doing, I’m begging you to come up with the type of rigorous standards that kids need,” Ripley said.

“We have to raise our expectations,” Neu said. “[Students] will rise to those expectations.”

Neu said he was also looking to increase teacher pay and hoped to make it a valued profession.

“We do have to increase the pay [of teachers],” Neu said. “It can’t just be all heart, there has to be financial reward.”