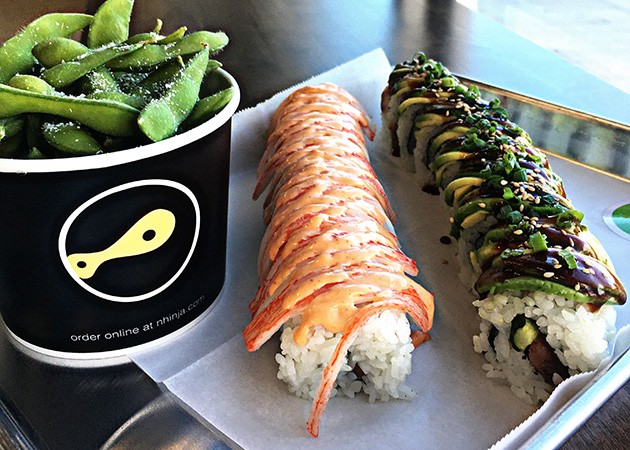 One of metro Oklahoma City’s first families of sushi is relying on the technology manufacturers’ market of “sushi robots” to lower the barrier for becoming a sushi chef with new fast-casual Nhinjo Sushi and Grill serving as a pilot program for potential franchise expansion.

Kang and Mary Nhin first took risks at Kang’s Asian Bistro in Edmond, where they introduced the option of nyotaimori dining, in which diners ate sushi off a naked woman. They then transformed Kang’s from a fine-dining restaurant into Nhinja Sushi and Wok, a family-focused sushi restaurant that has expanded to five locations across the metro area.

Nhinjo Sushi opened at 12301 S. Western Ave. in Moore Nov. 19, and its first innovation is immediately in view of customers — they have the option of customizing their order at an tablet kiosk — and its two other pieces of new technology — a pair of machines, one that packs sushi rice evenly and another that cuts rolls consistently — improve kitchen efficiency.

While the Nhins are conscious of potential criticism for adding automated products to the kitchen, they also point out that finding skilled sushi chefs is the most difficult part of operating a sushi restaurant.

Lowering the barrier to be able to consistently serve fresh sushi quickly is the biggest hurdle to clear when establishing a franchise of fast-casual and affordable Nhinjo Sushi stores that the founders hope can gain a regional foothold before expanding.

“It would be really nice to be in neighborhoods across America and have access to affordable sushi. We’re focusing right now on perfecting this model,” Mary Nhin said.

The pair of sushi robots are manufactured by Japanese company Autec. The Nhins said the technology is about four or five years old. They heard about them while attending a restaurant conference and toured restaurants where they’ve been deployed in Dallas and other cities before deciding to make an investment that they hope spurs future expansion.

First up on the kitchen line is the $14,000 Maki Maker, in which staff pour a huge container of cooked sushi rice. The machine is capable of perfectly pressing up to 1,300 pieces of rice into perfect rectangles every hour. Kang Nhin, a trained sushi chef, said that the average sushi chef can form about 200 pieces over the same period.

After the rice and seaweed are filled with desired protein and vegetables, they’re rolled by hand and placed into the $6,000 automatic Maki cutter that produces 10 perfectly portioned pieces. 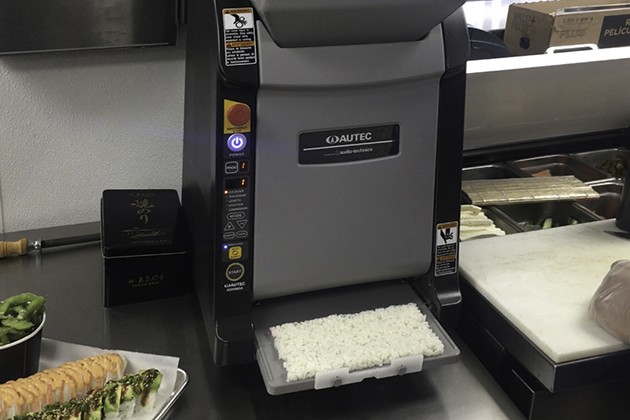 “It helps our employees do their job better,” Kang Nhin said. “Especially a sushi chef, they don’t want to sit there and mat out every single piece of rice on the sushi paper. It makes it easy for them; it’s a like a helper or assistant. Being a sushi chef, I wish I had that 10 years ago so that my hand doesn’t cramp up all night long.”

Nhinjo’s menu takes some of Nhinja’s most popular sushi rolls and adds a few new innovations while adding yakitori and salads like seared ahi tuna, Asian chicken or kale salad with avocado, tomatoes, cucumber and feta made to-order.

“It would be really nice to be in neighborhoods across America and have access to affordable sushi.”
—Mary Nhin tweet this

Two of its most popular items in its first few weeks include the Thunder roll with tempura shrimp with avocado topped with crabstick and spicy mayo, a holdover from the Nhinja menu. The Tiger roll — with cooked chicken in the center — is a creation for Nhinjo.

Guests have the option to make orders at the tablet by the front door or with a staff member at the front counter.

“I’m very picky when I eat, so when I customize anything, there is less miscommunication,” Nguyen said, noting that 60 percent of customers prefer to use the kiosk. “It gives us an extra person to focus on the kitchen to make sure it’s running correctly. Our turnover time is about five minutes [from order to table].” 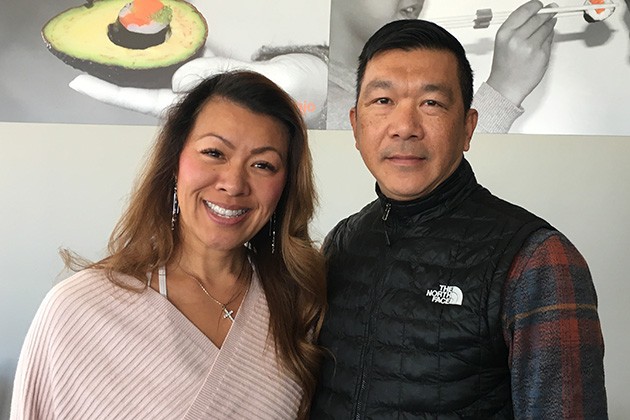 Kang Nhin’s family owned a noodle manufacturing company in Vietnam before they immigrated to the U.S., and he got introduced to the restaurant industry at a young age. He followed his older brothers to their job in the kitchen of a Chinese restaurant in Edmond, killing time watching the front and back of the house employees.

“When you fist migrate here, the only jobs you can get are in the restaurant industry because you don’t speak English, so you can go into prep and dishwasher and work your way up,” he said. “I’m the youngest, and during that time, my brothers would take me to the restaurant they worked in and put me in a corner because that’s the way of babysitting. … One day, I asked my brother to teach me how to make pepper steak. I was about 14 years old.”

Kang and Mary met while they attended Northwest Classen High School and opened Kang’s Asian Bistro in 2005 on Second Street in Edmond, which was later converted into a Nhinja Sushi before being sold to a cannabis company in 2019.

The ambitious couple is once again making a big investment with the Nhinjo concept.

“It’s fun and scary at the same time,” Kang Nhin said. “Are people going to like it?”