Chase Padgett does not fret about shifting genres in his one-man show, 6 Guitars. 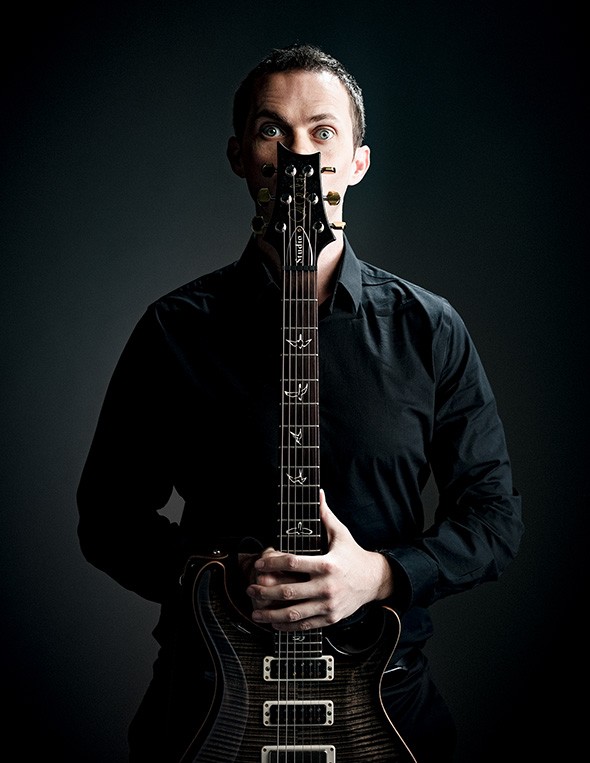 Chase Padgett will let you know right up front that his one-man show 6 Guitars might not meet your expectations.

“I start the show off with this explanation,” Padgett said. “I’m like, ‘Hey, everybody, who’s originally from Oklahoma City?’ or wherever I’m at. ‘All right. Who drove in for tonight’s show? Yeah! Who’s ready for a concert? Well, bad news. This is not a concert.’ And what’s interesting is people show up to the show with certain expectations, but because the show is so unique, oftentimes their expectations don’t meet what is actually going to be given to them. But … people end up getting hooked into it really early on. Once they meet all the characters, I got them. For the next two hours, I got them. People who are hoping to see a concert, they’re not going to see a concert. If they’re hoping to see a stand-up comedy special, it’s not quite that, either. And it’s also not a play, and it’s not improv. It’s just a hybrid of all of those elements in a single one-man show, and if people are excited to see something they’ve never seen before but still somehow feels familiar from things they have seen before, then this is going to be an experience they’re going to appreciate, for sure.”

The actor and musician is scheduled to perform 6 Guitars 7:30 p.m. April 9 at Visual and Performance Arts Center Theater at Oklahoma City Community College, 7777 S. May Ave. Despite its name, the show features Padgett playing a single guitar in six different styles — blues, classical, country, folk, jazz and rock — and embodying a different character for each style. It premiered at the 2010 Orlando International Fringe Festival, and Padgett said the Oklahoma City debut will be his 396th performance of the show, which has transformed “enormously” in the past nine years.

“It’s still growing; it’s still changing,” Padgett said. “The overall concept is the same, and the overall, I guess you’d say, framework and final message of the show and the experience is the same, but the actual material itself has just evolved a lot over time. It’s very similar to what a stand-up comedian would say about their act, that jokes they’ve been doing for years just get tighter, better, funnier; same thing with this show. The songs just get better. It’s just more seasoned and more tried and true.”

Padgett, who studied improv at SAK Comedy Lab in Orlando, said some aspects of the show change every single time he performs it.

“It’s mostly scripted, but there are a couple of interactions that are just purely crowd-based interaction,” Padgett said. “And then there’s a whole section of a song — it’s actually the closer for the first act — that is an improvised song in the style of rock for anyone that kind of catches my eye in the front row.”

While studying music at University of Central Florida, Padgett worked as an entertainer at Universal Studios and Walt Disney World, jobs he said “absolutely informed” his performance style.

“A lot of people don’t understand the education you get from performing in front of a crowd five times a day, seven times a day, five to seven days a week is an education that cannot be replaced,” Padgett said. “There is a certain level of sense of the crowd, where they’re at and what they’re into, that can only be earned by being in front of a bunch of crowds over and over and over again. … That training really helped me sell the illusion of spontaneity even though I’m so familiar with it. That’s really what I think the ultimate goal of scripted work is: to make the audience feel like it’s happening for the first time.”

While he wants his performance to feel spontaneous, the music in 6 Guitars, which includes original and cover songs, is well rehearsed. Playing classical-style guitar, which Padgett said “felt very alien and weird” when he began, has required the most practice.

“I certainly appreciate it, but it’s not necessarily the music that feels most at home,” Padgett said. “It definitely takes more work.”

His own personal style is more of a “blend of blues, jazz and rock.”

“I love the different chordal textures of jazz — your sevenths, your nine chords, your augmenteds and your fifths and whatnot,” Padgett said. “I also just love straight-up rocking power chords and lead solos, man. It’s a lot of fun.”

Padgett said his natural singing voice is bluesy, which made portraying a blues guitarist a natural fit, even if embodying an elderly African-American musician on stage was initially intimidating.

“Here’s the funny thing, though,” Padgett said. “Demographically speaking, it most certainly is the furthest away from what I am as a human being, but for whatever reason, it’s the one that actually came out with least resistance and is consistently praised as the one that’s the best character of the show. … It’s kind of the crowd favorite. … When I first did the show, I was concerned about it, but I felt like if I play this character and all the other characters with truth and honesty and I say things as those characters that I personally believe in as well and I’m really giving them a grounding in reality, then I think audiences will resonate with that. And honestly, I think that has been the case. I have done this literally pushing 400 times, and never once have I had a person of color give me negative feedback about that character or, really, any character.”

Portraying the character as a white man would be problematic in its own way, Padgett said.

“If I don’t play the blues archetype character as an African-American person, then aren’t I kind of doing exactly what white artists in the heyday of blues and jazz started doing in bad faith, which is saying, ‘Oh, but we’re really the people who do this best’?” Padgett said. “I think you have to recognize that it’s predominantly — particularly in its roots and still to this day — an African-American art form, and to not recognize that by playing a character that isn’t African-American, I think, is actually the greatest potential slight.”

“I argue that the message of the show is music is a unifying force that reminds us that humanity, much like music, is all kind of the same,” Padgett said. “We might have different voices, but we’re all kind of singing the same songs. We’re all singing about the human condition.”