Olive oil ice cream made me a believer.

Belle Kitchen has been the toast of Oklahoma City since owner Cheryl Davenport started selling gourmet doughnuts at the OSU-OKC Farmers Market a year ago. But once she and executive chef Shelby Sieg found a permanent location at 7509 N. May Ave., the talk picked up steam.

Well, talk might be too strong a word. There’s a lot of mumbling as people try to express themselves while eating doughnuts.

Considering the time it takes to make them, that’s understandable. Davenport said the doughnut dough takes 24 hours to prepare and requires three rises and three folds. The end product is a rich yeast doughnut that is airy and light, yet structurally sound enough to hold up under the weight of the frosting.

In one of her many lives, Davenport was a biology teacher in Toronto. A background in experimentation is evident in her doughnut recipe, the history of which stretches across countless spreadsheets. Davenport is a self-taught baker, and it took plenty of trial and error to create a doughnut that was “good enough.”

“But I couldn’t settle for that,” she said. “When I got to a certain point, that was when [local chef] Marc Dunham introduced me to Shelby.”

When she put her baking expertise to work on Belle Kitchen’s doughnut recipe, the result had the owner “literally weeping.”

The brioche-style doughnuts have a subtle sweetness, making the bread suitable for breakfast sandwiches as well as a great base for dye-free frostings. 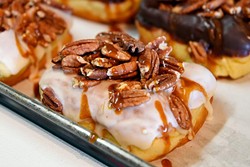 With decadent flavors such as brown butter and sea salt, blood orange poppy seed and passion berry, the doughnuts are extraordinary, especially when compared to the usual glazed variety.

As good as the pastries are, Davenport knows that doughnuts are a morning obsession for most customers, which is why Belle Kitchen explores menu items that expand its selection without straying too far from what it does best.

Macarons are a treat that has all-day appeal. They are a pâte à choux pastry that resembles a delicate miniature sandwich flavored in cherry, chocolate, lavender, pecan pie or numerous other options. 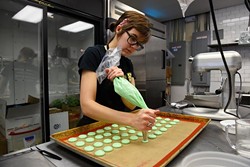 Sales of macarons run neck and neck with its other pastries. Davenport said the entire case sells out every two days, and special events dramatically drain stock.

Sieg said one of Belle Kitchen’s biggest draws is the relationship she and Davenport have developed.

“It’s collaborative for sure,” she said. “We check in with each other all the time, just making sure everything is going in the right direction.”

The pair share a vision for what the restaurant can become, and Davenport has expanded the business to make room for one of Sieg’s passions: ice cream.

Everyone who enters the charming eatery passes by the chilled case filled with delectable frozen treats. Chocolate-hazelnut ice cream might not sound extraordinary, but the selection only gets more ambitious from there. The green apple sorbet is tart and crisp. The olive oil ice cream has a beautiful, creamy flavor that ends on a green, floral note.

Soon, Belle Kitchen will dip scoops of ice cream into freshly made waffle cones. And once the paperwork goes through the ABLE Commission, Davenport wants to offer small plates, charcuterie and wine to keep the venue running later into the evening.

Before that, though, it will expand into a second, smaller location in a converted shipping container in Deep Deuce in the next month. 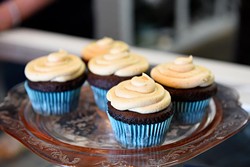 Some of the products will come from the main kitchen on May Avenue, but the staff will also cook in the new, 640-square-foot space.

How it will all work is, like the restaurant’s well-loved dough, a matter of trial and error.

Davenport is proud of the staff she has brought together in a short time and plans to promote them up through the organization, giving them ownership stakes as the company continues to grow. Everyone will play several roles.

“We just have to figure it out,” she said. “Every day is a new experiment.”