Anyone who has walked through the Oklahoma City National Memorial & Museum will immediately recognize the chilling opening to Oklahoma City, the Barak Goodman-directed documentary that debuted in January at Sundance Film Festival and screens Friday through Sunday at Oklahoma City Museum of Art, 415 Couch Drive.

There’s the recording from the April 19, 1995, Oklahoma Water Resources Board meeting (just across the street from the Alfred P. Murrah Federal Building) that is interrupted by the blast that would forever alter the course of the city’s history. Following is the immediate shock and confusion communicated by a scene from the breaking media coverage. 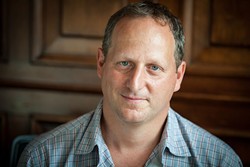 In starting his film so similarly to the memorial museum experience, Goodman acknowledges that he believes the story from that particular day in history has already been told as well as it can be. Instead of focusing solely on the bombing, the director dives deeper into the unrest from which bomber Timothy McVeigh and his small group of cohorts emerged and frames the events in a context that is relevant today.

The story of McVeigh’s motivation to build a bomb often begins in 1993 at the Mount Carmel Center near Waco, Texas, where tragic events involving a weekslong standoff with federal agents at David Koresh’s Branch Davidian compound culminated with burning deaths of 80 people, including 22 children.

Federal agents attempted to seize the compound partly because they became aware that those inside were hoarding grenade shells, assault rifles and other military-grade equipment. Though Koresh (who claimed to be a prophet of the apocalypse) ordered the compound’s ignition, many far-right groups and sympathizers, including McVeigh, blamed the federal government and allege it unjustly provoked the tragedy as part of a breach of their Second Amendment and religious freedoms.

Goodman uses great detail describing the Waco incident and how it inspired McVeigh, but the filmmaker goes even further into the past, describing a fervent national antigovernment and white-supremacist scene in the 1980s that served as the Oklahoma City tragedy’s motivating bedrock.

The film looks into both the 1984 murder of liberal radio host Alan Berg and the fatal 1992 standoff between separatist Randy Weaver’s family and federal agents at Ruby Ridge, Idaho, as it explains the rise of far-right tensions and their association with occasionally violent outcomes.

It is somewhat ironic that the project is titled Oklahoma City, because its focus is just as much on preceding events from elsewhere in the country.

None of this is to say the OKC terror attack gets lost in the narrative. Goodman leaves little to the imagination when it comes to the day’s carnage. Bodies of dead infants are shown, and in one scene, a first-responding surgeon bluntly details an on-site leg amputation.

Oklahoma City is intended for a national audience. No time is spent on the post April 19 healing process or what has become of the city, as some other films have done.

Goodman puts special focus on the attack’s connection to antigovernment and hate groups as a reminder of how dangerous these types of sentiments can be when taken to their most extreme.

The director does not specifically call out a recent rise in racial hate groups as reported by Southern Poverty Law Center as the inspiration for his film, but the timing of its release makes such a statement unnecessary.

After screening at the art museum, Oklahoma City airs on Public Broadcasting Service (PBS) affiliates nationwide 8 p.m. Tuesday as part of the American Experience program. Those interested in this documentary should also tune in 8 p.m. Feb. 14 for the premiere of Ruby Ridge, also directed by Goodman, for more information on the events that led into the Oklahoma City bombing.