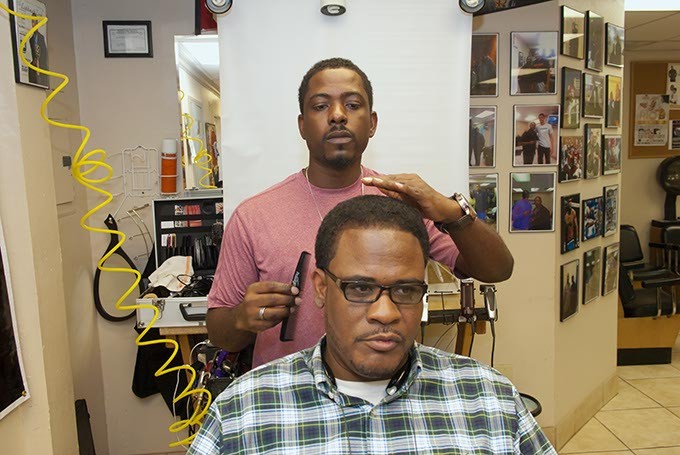 Larry Coleman’s first day as a barber began at his sister’s home in his hometown of Hugo, Oklahoma. At just 9 years old, Coleman was tasked with cutting his nephew’s hair.

“I made $2 on that haircut,” he said, “and considered myself a barber from that day on. My slogan was ‘Professional hair cuts for an amateur price.’”

Thirty-one years later, Coleman is still barbering and business is booming. From his shop, Legitimate Look Salon, 6051 N. Brookline Ave, Ste. 119A, he sees a wide variety of clientele. On an average day, just about anyone can walk through the door, from lawyers and students to toddlers receiving their first haircut.

“He’s a laid-back and down-to- earth guy,” said Kiauntra Denton, Coleman’s assistant, “and clients like that about him.”

But Coleman’s upbeat and laid- back attitude is only part of the reason for his success. His shop has grown in popularity amongst professional athletes recently too. His client lineup is a who’s who of professional basketball players.

Kevin Durant, Serge Ibaka, Russell Westbrook, Jeremy Lamb and Kendrick Perkins are just a few of those who patronize Coleman’s shop before going on the court, though Coleman insists, “Each and every client who sits in my chair receives the celebrity treatment.”

Coleman seems to have found his calling in barbering; however, a greater passion lies in supporting and raising awareness for a cause dear to his heart.

“My destiny was in building the Almond Eyes Foundation,” he said.

When his daughter passed away in 2013 from lupus, it was her dying wish that anyone with this disease no longer suffer. So he embarked on a journey to raise awareness and support the search for a cure through starting the Almond Eyes Foundation.

“I named it Almond Eyes because when I first laid eyes on her, the first thing I noticed were her beautiful almond eyes,” he said.

The foundation is a nonprofit organization devoted to finding a cure for lupus.

Lupus, an autoimmune disease, is a condition in which the body attacks healthy tissue and organs. According to the Lupus Research Institute, the disease affects 1.5 million Americans, 90 percent of which are women.

“This is what my daughter wanted to do. I know a lot of people, and

I know that I’ll be a good voice for raising awareness,” Coleman said.

And if his website and social media traffic is any indication, it’s clear that his clients aren’t shy about supporting his endeavors, especially his latest, a skin care line that supports finding a cure.

The Legitimate Look Skin Care Line began with just one cream, which was developed by Coleman for the treatment of his youngest daughter’s eczema.

He later discovered that after some tweaking, the cream also soothed the pain from lesions on her back that were associated with the disease.

More information about Coleman or The Almond Eyes Foundation can be found at legitimatelook.com.