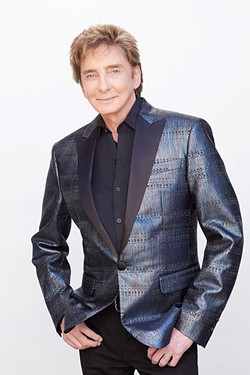 One of the first times Barry Manilow performed in Oklahoma City was as music director for an early Bette Midler tour. A few years later, he was out on his own, headlining a sold-out concert arena. Now, the 72-year-old superstar returns to OKC on his farewell tour, One Last Time, 7:30 p.m. April 14 at Chesapeake Energy Arena, 100 W. Reno Ave.

“I first came to Oklahoma City as a headliner in 1975. It was one of the first arena dates I played,” Manilow said during a recent phone interview from his Palm Springs home. “I remember Oklahoma City well. I remember the hotel, the room, the lobby and the arena. Fans there have always been on my side, and they’ve been there for me all these years. I couldn’t be more grateful.”

Manilow is one of the best-loved entertainers of a generation. His breakthrough song “Mandy” topped charts early in 1975, becoming the first in a string of hits and multiplatinum albums. In 1978 alone, five of his albums topped charts simultaneously. Today, his worldwide record sales exceed 80 million. He is one of the most popular adult contemporary artists of all time, with more than 50 Top 40 hits.

“This tour doesn’t mean I’m retiring; I don’t even know what that word is,” Manilow told Oklahoma Gazette. “I just have to get off the road. … It’s been a great experience every night over these last 45 years. I can tell you that every night is exciting, but it’s the road that finally got me. So this is the last tour.”

The One Last Time tour began early last year and has hit every major American city. “Fanilows,” as Manilow fans have come to be known, will experience a unique show.

“I’ve never quite done a show like this,” Manilow said. “I am doing all of the songs that made it onto the radio. On every tour, I was always promoting an album or I had a 1940s Big Band medley or some special material. But since this is the last time I know I will be visiting these cities, I decided to do all the radio records.”

For example, he said he hasn’t performed “Read ’Em and Weep” since that record came out in 1981. It has also been a long time since audiences heard “Somewhere Down the Road” or “Ships.”

Recreating those songs is a feat in and of itself. He said he relearned many of the tunes, and he is one of the lucky entertainers who can fill an entire show with music audiences recognize.

He launches each show on this tour with “It’s a Miracle” and ends with “Copacabana,” he said.

“In the middle, it’s every song that ever made it onto the radio,” Manilow said. “This is the first time I have ever done anything like this.”

His most recent album, My Dream Duets, was released in 2014. It features Manilow and the vocals of some of his favorite performers, including Whitney Houston, Sammy Davis Jr., Mama Cass, Louis Armstrong and John Denver, among others. He features one duet from the album on his farewell tour.

“This album is a miracle,” he said. “It really is a technical marvel. Technology has evolved so far that we were able to remove the old orchestras and just leave me with the voices.”

That allowed him to do new arrangements, too.

“I could put Andy Williams’ ‘Moon River’ in a different key or put a new ending on a Dusty Springfield track,” he said. “And to hear Judy Garland’s voice in my headset like she was standing right next to me, it was really a very emotional and special experience.”

Manilow said he tries not to think about the moment he will step off the stage for the last time.

“Each night, as we get closer to the final show, these songs that usually are not very emotional to me are becoming emotional,” he said. “Something as simple and fun as ‘Can’t Smile Without You’ is now starting to mean something totally different. … But I’m having a great old time on this tour, and I want to tell all my fans, especially those in Oklahoma City, how truly grateful I am for their support through these many years.”