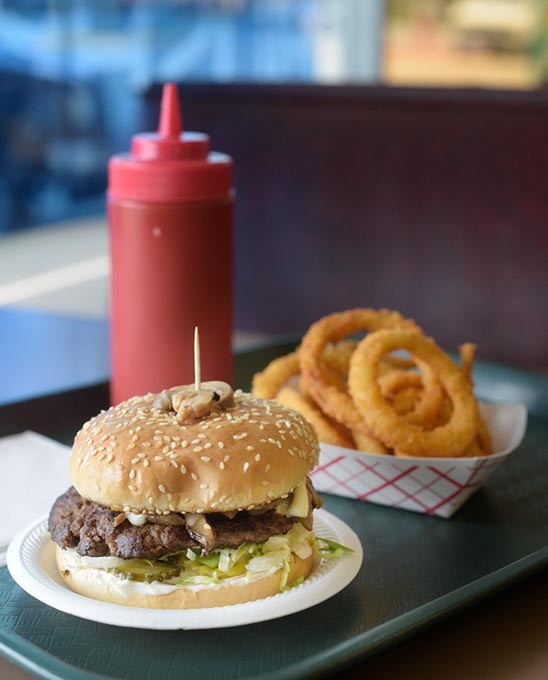 The big, green sign is hard to miss when traveling on May Avenue in Oklahoma City. Plastered on the old-school cutout is a life-size depiction of what’s inside, a simple yet effective message relaying how burgers used to be: a beef patty with tomatoes, lettuce, onions, pickles and cheese sandwiched between a sesame seed bun.

Above, it reads “Old Fashioned.” Below it, the words “fresh hand cut fries” are boldly displayed in a mustard yellow color.

For more than two decades, Barry’s Old Fashioned Burger has used this basic, no-frills approach to serve its loyal customers an American favorite: burgers and fries.

“Keep the food fresh every day. That’s the key. It makes a big difference when you have fresh meat, fresh potatoes to serve,” said Bahram Heidari, owner of Barry’s since 1996. “That’s how the old-fashioned way should be.”

In an era of premium burgers with an alphabet soup list of ingredients and toppings, the establishment, located in a strip mall on 3124 N. May Ave., takes a throwback approach with a straightforward menu.

There are 19 options consisting of eight burgers ranging from a basic hamburger to mushroom Swiss and jalapeño burgers, sandwiches like BLTs and patty melts.

Those in search of crazy concoctions, like gourmet beef blends or macaroni and cheese-topped burgers, will need to look elsewhere.

“I’m not against them, but I like to stay with the old-fashioned,” Heidari said of the evolution of burgers.

At Barry’s, the routine is the same each morning.

Ground meat, in the form of pre-formed burgers, is delivered daily from Oklahoma City Meat Co., a local company that has been in business since 1957. Buns arrive prior to opening, too, and produce is prepared at a small station in the back.

Burgers sizzle on Barry’s wide, flattop grill where they are cooked to-order. The process is in plain view, giving customers a glimpse into the construction of their burger.

To the right, several deep fryers prepare french fries that are cut daily from 50-pound shipments of potatoes.

Another characteristic of simplicity is the fries, once they are removed from the bubbling 350-degree oil, receive no seasoning. (Salt and pepper packets are provided with each order.)

One by one, potatoes are rinsed and placed on an antique-looking potato cutter. From there, they remain in a refrigerated bucket and are cooked to order.

From Iran to OKC

It’s unclear when or where Heidari’s fondness for old-fashioned burgers developed. Instead, his business-savvy personality and interest in food led him to acquire Barry’s Diner 21 years ago.

The burgers were a far cry from his upbringing in Iran, but he chose to proceed anyway.

“I don’t know what got me interested, but it was for sale and I bought it since I was around food,” Heidari said.

The old Barry’s dabbled in burgers. It also had chicken-fried steak and chili, among other things, that Heidari referred to as “diner food.”

He simplified the menu, added to the interior and exterior and slapped “old fashioned burger” to the Barry’s namesake.

“I don’t like that. We stay with fewer items and improve those,” Heidari said of a cluttered menu.

Prior to the purchase, Heidari managed restaurants and hotels. His roots came in the kitchen and as a bartender across three different states. Locally, he started out as a bartender at the old Sullivan’s Restaurant & Bar at Reno and Meridian avenues.

Heidari’s decision to run a burger joint wasn’t any riskier than his choice to make a leap of faith more than 30 years ago when he immigrated to the United States.

Heidari left Iran for Pepperdine University, a small, private school in Malibu, near Los Angeles. A short stint in Arkansas led to Oklahoma, where he transferred to Oklahoma City University and later the University of Oklahoma (OU) to finish his degree in sociology.

From there, he continued to work his way up, priding himself on customer service using his Middle Eastern dialect.

“You think I have an accent?” Heidari said with a serious face before bursting into laughter.

From the decor and menu all the way down to the old tube television in Heidari’s office, Barry’s is best described as a throwback joint.

Not much has changed in the years since Heidari took over, including the maroon booths and fake plants sprawled out across the dining area.

One of the newest additions, interestingly enough, is an artifact: an old rotary dial phone on the front counter used to answer takeout orders. Heidari received it from his uncle a few years ago.

Even the music provides a trip down memory lane with selections like Eddie Money’s “Take Me Home Tonight” serving as background noise as patrons chow down on burgers.

This niche product and setting helped develop a niche customer, or the “repeat customers” as Heidari terms them.

“I got a bunch of regular customers who like my food,” he said. “They support me. A lot of people have been coming 20 years, and they are still coming.”

Over the years, he has witnessed these regulars grow before his eyes.

“I have a customer, their kids were little, maybe a teenager, and now he’s a doctor practicing. I have another customer, his kid is now a professor at OU,” Heidari said.

Heidari said Thursdays and Fridays are generally the most popular. Barry’s sees a spike in orders during the lunchtime rush from the working crowd around town, from lawyers to landscapers and everyone in between.

On a busy day, Barry’s will churn out as many as 200 burgers. The top sellers are the mushroom burger, jumbo cheeseburger and bacon cheeseburger. The jumbo burger is served Thursdays as a special with fries and a drink for $8.95.

Not a single item on Barry’s menu is more than $9, a wallet-friendly caveat allowing Heidari to stay relevant over the years.

“Our prices are good. I don’t charge as much,” he said. “Competitive pricing, having a decent price, customer service and fresh meat — that’s why business grows and stays busy.”