Basil bunch is not about 'fpooloticsd'

What works: Lamb shanks and kabobs are tender and tasty.

What needs work: The falafel isn’t nearly as good.

Tip: Call-ahead ordering can shave off plenty of wait time.

For the life of me, I don’t know the difference between Mediterranean food and Middle Eastern food.

I firmly believe that politics have no place in food. Where would you even put it? Fpooloticsd? C’mon. That’s gibberish, and you know it.

So if there’s some political reason everything is Mediterranean now, I don’t know it. I just know I like eating it.

And that includes Basil Mediterranean Cafe, 211 NW 23rd St., the new tenant in an old KFC and Long John Silver’s building. The food is not, by and large, “fancy.” But I don’t know anyone who goes out specifically looking for fancy foods. I’m not acquainted personally with many princesses or dukes.

But even those lace-wrapped VIPs should be willing to slough off their doilies like so much snake skin and hunker down with a gyro ($4.50). Much like pizza, it’s hard to find a bad gyro, and I quite like the thin, crispy slices of meat in Basil’s iteration. One suggestion: ask for extra tzatziki sauce. 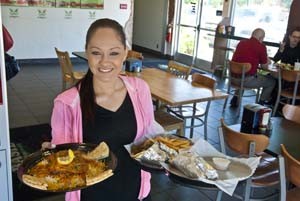 Another suggestion: eschew the falafel ($4.50). I am an ardent fan of falafel, but these are too dry and not terribly flavorful. There are better items on Basil’s menu.

For instance, the chicken souvlaki ($5.50), which is basically a chicken kebob in a pita. You want this kebob. The meat is marinated, so even though it’s cooked through, it’s still moist and tender. The flavor of the grill comes through, and it’s tasty at a primal level.

If you want something similar but with more vegetables and rice, the chicken shish kebob plate ($9) is what you’re after. It’s filling, and it’s probably healthy, which is better than I can say for most of my meals. Is the kubedeh kebob ($8.99) as healthy? I don’t care, because it’s wonderful. Mix beef, onions and seasoning; pack it on a stick; and cook it. The meat’s still juicy and fairly overflowing with flavor. Much better than some of the chewier versions I’ve found elsewhere.

I have, like Vanessa Williams, saved the best for last. The osso buco lamb shank ($12.99) is a big hunk of lamb that is only tenuously attached to a bone. Served with rice, potatoes, celery and carrots, it’s braised in the Italian style. This is not something you find everywhere, and I don’t know why. One caveat: if you’re getting it to-go, beware. It’s kind of a juicy dish.