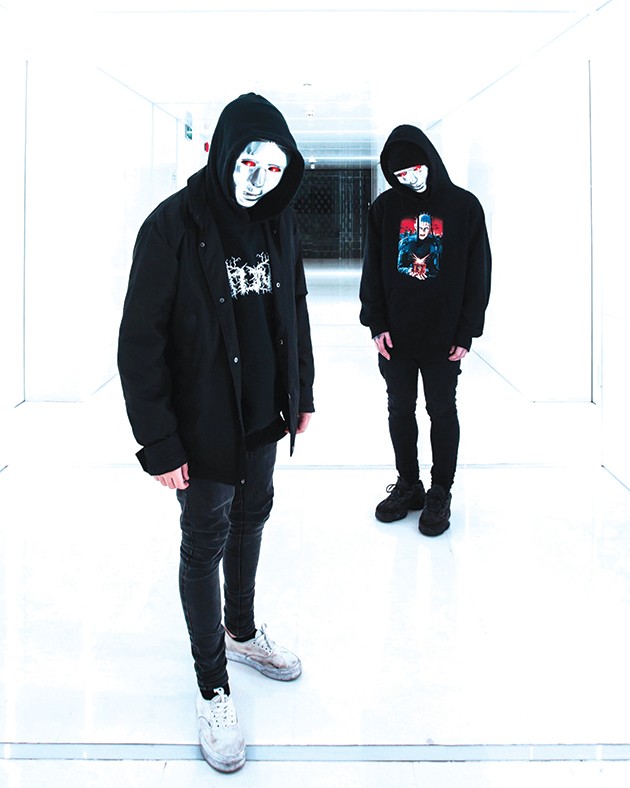 “We try to eliminate the ‘human’ aspect in our live shows and try to keep it all about the music,” said the anonymous Atlanta-based production duo in an email interview. “When it comes to our music, we really just make what we are feeling creatively. We would like to think that our music is pretty recognizable to listeners, but that’s kind of up to them to interpret.”

“The cohesion within the EP is one of the first things that I noticed about it,” Meadow wrote. “Each track follows a similar sonic theme and pushes it to the limit, all while keeping the creativity and style of the brand. For the most part, this boils down to two elements: minimalism, and weird bass. This could effectively classify a swath of artists, but ATLiens easily make it their own.”

ATLiens, meanwhile, won’t admit to having a predetermined plan of attack for creating extraterrestrial tracks such as “Exterminate,” “Invasion” and “Fuck That.”

“We have zero approach to making music,” ATLiens said. “Every time we start a new tune, it’s an open canvas, and whatever comes to mind comes to mind! Being a duo helps our process. A lot of times, if one of us begins an idea and gets stuck on it, we pass it on to the other and then the idea evolves into so much more.”

Even when collaborating with other artists such as Party Thieves (ATLien’s 2015 debut track “Chief,” later featured in a Samsung Galaxy commercial) Oklahoma City’s Tynan (2018’s “Malfunction”) and influential low-end veteran Bassnectar (“Interlock”), requires “nothing different, really,” from the duo.

“Bassnectar is a great guy and was an absolute pleasure to work with,” ATLiens said, describing the recording process for “Interlock.” “That song came together so quickly. We had it signed and ready to release after just a few weeks.”

“‘Interlock’ is the best example of how a track can be made to sound full by using as little elements that work together perfectly to create a big sound,” Pal wrote. “The clean 808s, properly mixed drums, the crazy pitched down vocal chops, and a consistent groove throughout the song show how two different artists can come together to work on something that in the end still showcases their unique traits.”

As an internationally touring act, ATLiens does seem to take a more intentional approach to building a setlist.

“Every time we start a new tune,
it’s an open canvas.”
—ATLiens tweet this

“Creating a live set is much different than creating songs,” ATLiens said. “A live set typically consists of about 70 to 80 songs: a lot of our tunes, remixes of our tunes, and tunes from our friends. It's very fast-moving and all about the energy. We spend many hours a day going through our promo emails, looking for what's the next big song!”

In August, the members of ATLiens announced they would unmask and uncover their true identities.

“The world of bass music has one well-known, anonymous DJ/producer duo — and despite what they recently led fans to believe, it will stay that way,” reported EDM.com. “ATLiens tweeted plans to show their faces later in the evening. When it came time for the big reveal, the video clip showed [Shaun Bacus, aka Hekler] and [Hamish Prasad, aka Marauda] taking the duo's iconic masks off instead.”

For fans familiar with the artists, the troll was easy to spot. Those unfamiliar with electronic dance music might have been confused, but being misunderstood by the uninitiated is nothing new for genre fans and artists.

“People outside the scene just don't understand that we are one big family,” ATLiens said. “We look out for each other, and we have each other's back.” 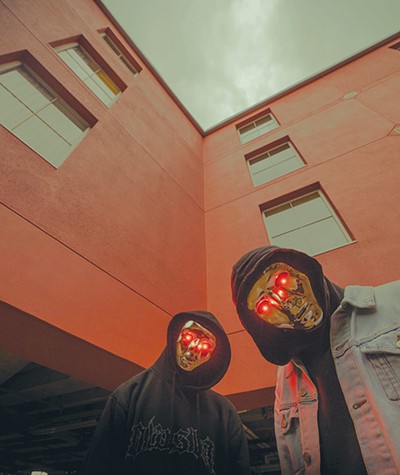 In an interview with EDM.com, manager Griffin Haddrill explained why maintaining ATLiens’ anonymity is “a huge priority” despite issues with security and fears that audience members will attempt to unmask the duo mid-crowd-surf.

“It is truly about the fan and music experience,” Haddrill said. “When you come to an ATLiens show, fans are there to experience the music. ATLiens in their own way have a personality, but the human element isn't there. It's about the fans, the music and ATLiens all coming together to create an atmosphere you don't get at other shows.”

The duo, meanwhile, had a single complaint about remaining incognito.

“Eating and drinking with this mask on is pretty difficult,” ATLiens said.