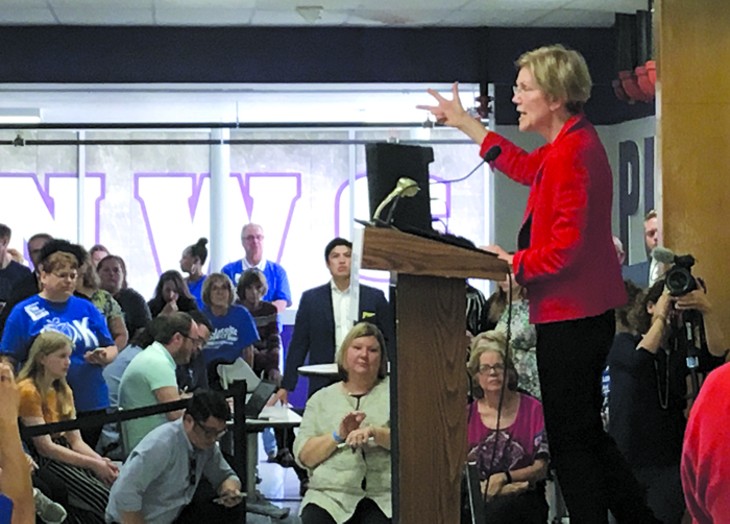 Northwest Classen High School’s cafeteria was filled Sept. 22 with teachers, students, families and politicians who eagerly trickled in and stood up in the crowd to hear Oklahoma born and raised Sen. Elizabeth Warren, D-Massachusetts, speak about education reform in the Sooner State and across the country. If the crowd anticipated a somber speech by a Washington politician, they might have been surprised to hear a colleague’s battle cry instead.

Warren, 69, graduated from Northwest Classen in 1966 and became the first person in her immediate family to graduate from college years later. She went on to become a public school special education teacher, law professor and eventually a state senator.

“I am living proof that an Oklahoma City public education can prepare you for just about anything,” she said to the crowd of over a hundred.

Warren praised Oklahoma teachers for leading the way to change. Low wages and a lack of funding have driven thousands of teachers to participate in walkouts and protests across the nation. Oklahoma’s own two-week teacher walkout in April made national headlines, and while teachers’ names are on ballots across the country this election season, no other state has as many educators running for office.

With over 50 Oklahoma teachers running for state office, Warren took inventory of those who were pre- sent Saturday.

“Raise your hand if you are a teacher running for office,” Warren said, raising her own hand proudly. “If politicians won’t hear us at the Capitol, then we’ll make damn sure they’ll hear us at the ballot box.”

Cheers and shouts of praise could be heard from outside a cafeteria that teachers normally attempt to keep quiet.

In June, Oklahoma Education Association counted over 100 educators running for office. The latest recount shows that about 70 teachers will be on ballots for state House and Senate seats in November.

“The pay raise was good,” Buck-master said, referring to the $6,000 pay raise legislators gave to teachers statewide in March before about 20,000 teachers and supporters went on a strike that resulted in the temporary closure of at least 10 school districts in the state. “But that’s just one of the victories we are fighting for. The strike was just the first step, and we know we have a long way to go. Rallies like this help fan the flame.”

A $6,000 pay raise is not enough for a state that ranks close to last in the nation for teacher pay and educational funding, Warren said.

“Ninety-one school districts in Oklahoma have been forced to become four-day week school districts,” Warren said. “We are fighting to change a system where teachers have to work two to three jobs just to make ends meet ... where teachers are drowning in student loan debts ... where outdated history books don’t go beyond the 43rd president of the United States and where wasp nests can be found in the cracks of the floors.” 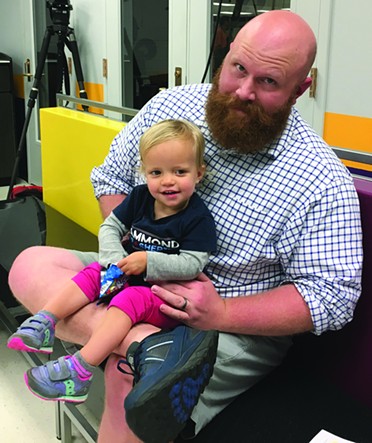 In addition to advocating for education for all, Warren said she is also a firm believer in universal healthcare.

Former police officer turned Cleveland County sheriff candidate Kevin Hammond listened to Warren from the back of the room as he held his 2-year-old daughter Rori. He said healthcare and education deserve equal attention in Oklahoma.

“They are the foundation for a strong human being and also for a strong society,” Hammond said. “If a population isn’t well educated and has poor health, it’s hard for them to focus on anything else.”

Oklahomans who are fighting to receive education and healthcare can’t progress, Hammond said, when they are barely surviving.

“Some people are fortunate enough to seek out a good home in a good school district,” Hammond said. “But that’s not the case for the majority of Oklahomans.”

The tide is changing, Warren said, and will get stronger when educators are elected into public office, where they can create and implement policies that will positively impact Oklahoma’s educational system.

“I feel a lot more encouraged to get to know the candidates,” Buckmaster said. “[Warren] made me realize that even if a teacher is not running for office in my district, that I can still encourage my friends and family to vote for an educator in their district.”

Oklahomans should vote for candidates who support increasing funding for education, Warren said.

Earlier this year, Oklahoma City School Board agreed to close Oklahoma City public schools on Election Day, Nov. 6, to support the educators and their families who are running for office.

“We still have work we need to be doing,” Oklahoma Education Associ-ation vice president Katherine Bishop said at the school board’s meeting in May. “We’re working with our members right now to go knock on doors and work for candidates.”

OEA is a major teacher union in Oklahoma with at least 40,000 members, according to its website. American Federation of Teachers, which organized Warren’s speech at Northwest Classen, is a national teacher union with Oklahoma representation.

Sally Bell, an AFP member and freshman English teacher at U.S. Grant High School in OKC moved to Oklahoma upon learning that the state is one categorized by the union as a “high need and high risk” community.

“It’s a blessing because I get to see the reward of my hard work on a daily basis,” Bell said. “At the same time, it’s hard because really getting to know your students means getting to know their struggles too. They struggle to have the basic tools needed to learn.”

Evening the playing field for all of Oklahoma’s students should be a main priority, Warren said. Teachers, regardless of their political affiliation, seem to share that belief.