One established, the other new, George’s Happy Hog Bar-B-Q and Cornish Smokehouse excel with different styles of barbecue. 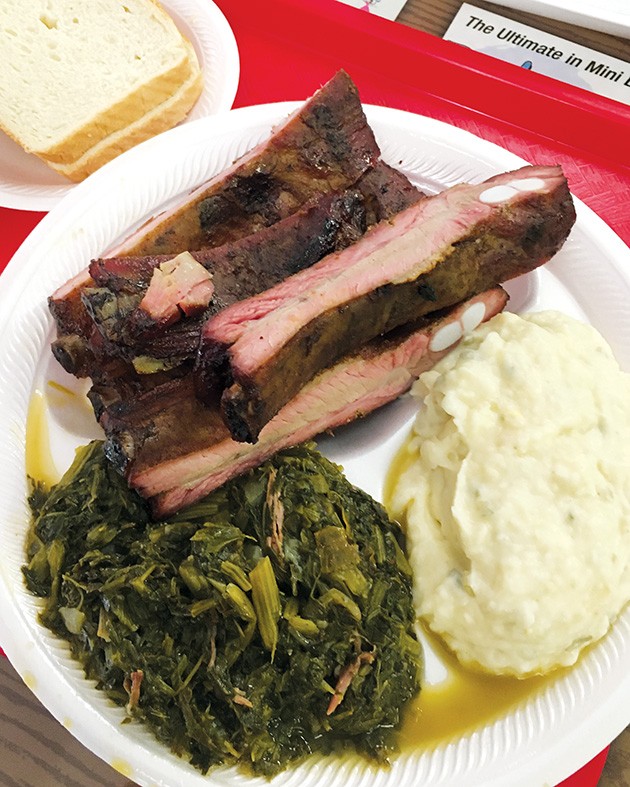 What works: Sides at George’s live up to superlative menu descriptions, and jerk sauce at Cornish Smokehouse has heat that grows.
What needs work: The spicy barbecue sauce at George’s is too acidic while the menu at Cornish can be hard to navigate.
Tip: Check out the wing specials at both restaurants on Wednesdays.

There’s the anxiety associated with everyday life, and then there’s the anxiety when someone asks you about your favorite barbecue restaurant. People’s regional allegiance, preferred type of wood and favorite cut of meat all come into play and render the question a powder keg.

I have a confession: I’m not a barbecue connoisseur. I was born in Memphis and lived in north Mississippi for a long time, where I ate at famous Bluff City institutions like Rendezvous, Central BBQ and Commissary, but I can’t provide a definitive ranking, just like I can’t do the same for Oklahoma City.

A lot of bowl favorites range from staples like Leo’s BBQ, 3631 N. Kelley Ave., which has been open since 1974, to new kid on the block Clark Crew BBQ, 3510 Northwest Expressway.

I wanted to do something a little bit different in the review section this week. Instead of reviewing one barbecue restaurant and trying to rank it among the city’s options, I wanted to go to two — one established and one newer entry — to see how they stack up against each other. 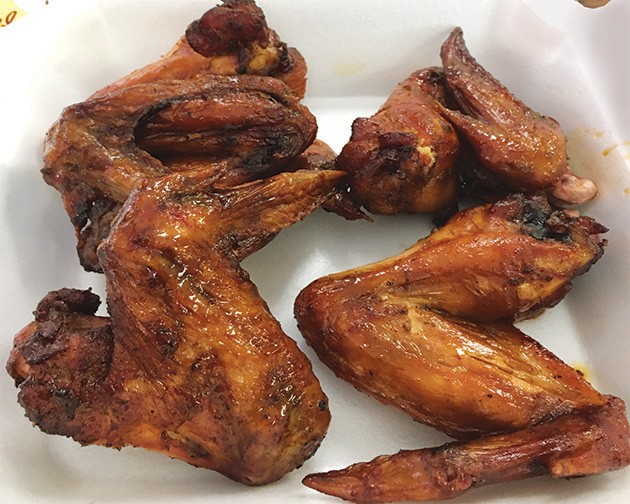 In the shadow of the State Capitol, just off Lincoln Boulevard, George’s Happy Hog has dutifully served pecan-smoked meats at this location since 2004. The restaurant was founded by George Thompson and Dee Bowlin but has continued under the ownership of Debra Ivory since 2012.

For me, barbecue is more of a special occasion meat treat than a weekly occurrence, so I’m still eating my way through my Oklahoma City favorites for the first time, which included my first trip to George’s in early February. On a cold, misty Wednesday, the restaurant still held a healthy lunch crowd around 12:30 p.m. The smell of pecan smoke emanated throughout the building, and it was as warm as Ivory’s smile as she greeted customers.

An older couple in front of me in line also appeared to be making their first trip to the restaurant, but they exchanged common acquaintances with Ivory as they made their order, and that really made the restaurant feel like eating at a home.

Customers make their order for a plate or sandwich that includes ribs (on the bone or rib ends), brisket, chicken, bologna, sausage or hot links. Make the order at the counter and the group of workers behind the counter preparing the meat will ask if you want white or wheat bread to go with your meal.

On Tuesdays and Wednesdays, they serve smoked chicken wings, which is an all-too-rare treat at barbecue restaurants as far as I’m concerned. We can thank the Buffalo wing craze that started in the 1990s for raising wing prices to the point that they’re probably too expensive to be an everyday menu item. It’s a shame because the wings’ dark meat and fat content make it the perfect vehicle for soaking up the smoked pecan flavor.

I couldn’t choose between ribs and wings, so I got both: a rib dinner with sides of “marvelous” mixed greens and “perfect” potato salad ($13.49) and five chicken wings ($8).

At George’s Happy Hog, where the slogan is “Flavor to the bone,” the ribs lived up to that billing. They were perfectly cooked: tender, but not overcooked to the point the bone pulls off, leaving the meat. The chicken wings hit the spot, as well. There was great color on the skin, and the wings are served whole, so you have both the drumette and flat from which to munch.

As good as the meat was, the “perfect” and “marvelous” qualifiers on the sides made them the star of the meal. The potato salad is unlike any I’ve seen before. The potatoes are almost completely smooth like mashed potatoes, but they’re perfectly cool (get your lukewarm potato salad out of here) and have nice acidity from some pickle juice. The greens were also a revelation. Cooked down over hours and with flecks of smoked pork, they’re almost impossibly tender and have no harsh flavor.

I didn’t really need much sauce because the meat was flavorful on its own, but I preferred the regular sauce at George’s compared to the spicy version. 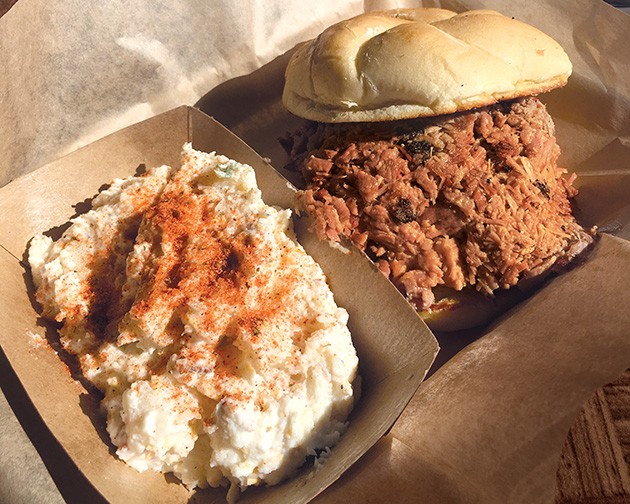 Chris and Nicole Cornish opened their brick-and-mortar location in October 2018 after years operating out of a food truck, and they’ve quickly created a cult following in the crowded barbecue field with unique offerings. On the weekends, they offer smoked and deep-fried chicken along with soulful sides like macaroni and cheese.

They have another secret up their sleeve: jerk sauce made with ingredients shipped from family members in Jamaica. You can get the sauce on fried chicken wings, loaded fries, pork ribs, meatballs and pulled pork and even order it with French toast ($14.50), which is like taking ubiquitous chicken and waffles and turning it up a notch.

The Cornishes are thriving at this location on the border of Oklahoma City and Moore even after burglars created a fire and took out their food truck in late 2019.

I first wrote about Cornish Smokehouse early in January 2019 and was excited to return this year to see how it has progressed. A mixture of Delta blues music from B.B. and Albert King played as I made an order at the counter: a chopped brisket sandwich, loaded potato salad and drink ($10) and jerk fried chicken with greens and potato salad ($13).

The chicken is fried to-order, so it takes 8-10 minutes for it to arrive at your table, but it’s well worth the (minimal) wait. Outside Carican Flavors, 2701 Martin Luther Ave., I don’t know of another restaurant serving real jerk sauce. All too often, “jerk” flavoring in the U.S. is a spice blend placed on chicken like blackened seasoning.

The jerk sauce on the chicken wings has a nice balance of allspice, nutmeg and brown sugar at first and then heat from scotch bonnets creep up for both an immediate and lingering burn that is just the right amount. It’s not so much heat that it takes away from the flavor of the meat, but it also turned my lips red. The saucy dish was a six-napkin meal, and the fried chicken skin remained crispy under the sauce. 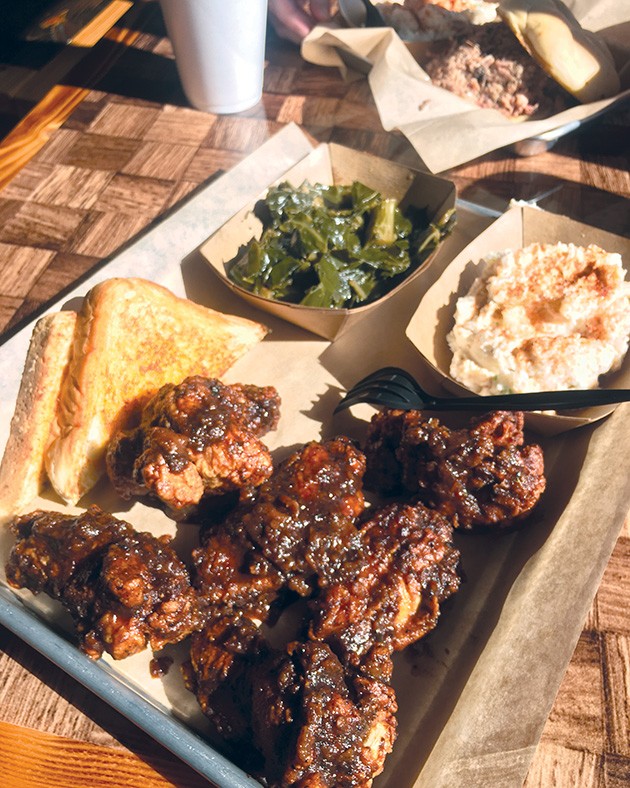 The chopped brisket was a real winner that had a nice contrast of crispy end pieces and tender center bites. Cornish Smokehouse serves a loaded potato salad that includes green onion, bacon and cheese that is like a cold twice-baked potato.

My only potential criticism for the restaurant experience is that the menu is a little bit hard to read in the restaurant. It’s hard to tell which items are weekend-only. I ordered fried chicken, but it’s only served on Sunday. Other items like jerk meatballs are only available on Saturday.

There’s no need to pick a winner because each restaurant provides completely different spectrums of barbecue. George’s doesn’t have any fried sides, while Cornish Smokehouse has fried okra, chicken and fries. It has also got challenge-worthy sandwiches like the Big Boi ($10.95) that melts Swiss cheese on a fried chicken breast and tops it with coleslaw, fries, ranch and jerk sauce. The sides at Cornish weren’t as good as George’s, but the jerk sauce makes Cornish a destination.