Norman-based artists Skip Hill and Douglas Shaw Elder started hanging out a few years ago to help foster the ever-important artistic community, but their friendship has done the near impossible and resulted in a successful collaboration between two artists that excel in different mediums.

Elder, the executive director at Norman’s Firehouse Art Center, is a skilled wood sculptor, while Hill is an accomplished self-sustaining mixed-medium artist that emphasizes vibrant color.

Their collaborative works and select individual pieces are on display through April 27 at The Depot, 200 S. Jones Ave., in Norman, with a second reception scheduled April 12.

“Collaboration is difficult, and it’s why many artists don’t want to do it because it is about compromise,” Elder said, before referencing the Steven Pressfield (author of The War of Art, among many others) quote “The best and only thing that one artist can do for another is to serve as an example and inspiration.”

Hill and Elder met about four years ago as they both served on Norman Arts Council, and a friendship began to form over a mutual love of hip-hop and gin and tonics. Hill began going over to Elder’s studio off Melrose Drive a few times a month so they could do what Pressfield advocates do — encourage each other and help strengthen the city’s artistic community, which they both feel is important for other inspiring artists.

“We want to encourage other people, particularly those that approach us all the time and want to get involved,” Hill said. “Take a night off and make some art.”

The first few years of gathering in Elder’s studio, the two artists worked on individual pieces until early 2018.

“Skip doodles a lot and cuts things out and leaves them lying out,” Elder said. “I kind of stuck them up for perspective on some of my pieces, and he asked to paint on it. It was a $4,000 that I had spent four months on, so we found something else.”

They eventually created 10 collaborative pieces, which are now on display as The Melrose Sessions.

Elder is a U.S. Army veteran that received his Master of Fine Arts degree from Boston University and moved to Oklahoma to teach at University of Oklahoma before taking over at Firehouse Art Center in 2007.

Hill worked in advertising before pursuing art full-time from a studio. He is in private collections around the world and featured at the Oklahoma state capitol’s art collection. He credits an appearance on OETA for jump-starting his standalone career.

Elder said his relationship with Hill is like “two sides of the same coin.” While Elder has a full-time job and the comfort of a steady paycheck, he also has less time to work on his pieces than Hill.

“I do an all-over process, where Douglas’ work is more subtle and kind of serene, landscape quality,” Hill said.

When Hill first began to draw over Elder’s woodwork, they realized that the chemicals Elder used to stain and protect the piece washed out, and they figured out he needed to use water-based markers for it to survive the finishing process. Compromise was the hardest part of the collaborative process. While Hill had to get new markers, Elder had to get new woodworking tools.

“One of things he learned quite quickly is that my chainsaw can’t Skip Hill,” Elder said. “It can’t make lines flow like his lines. That was a struggle for about four months. He’d be like, ‘Why don’t you do it like this?’” 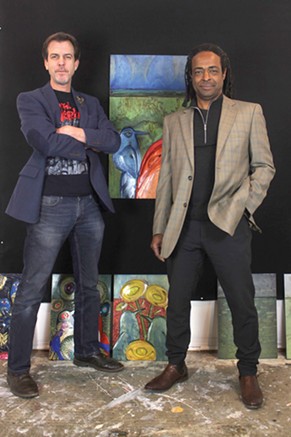 One of their finished collaborative pieces features a bright blue bird, which is a Skip Hill signature. He rarely draws two birds the same and does not intend for them to look like a specific species.

“Typically, my birds aren’t flying; they’re typically resting, almost in consideration. So I typically look at the birds more as metaphors for us, people’s relationships,” Hill said. “If people can bring their own stories, it is more engaging. I want to promote questions and moods. I don’t deal with irony or try to be cute and smart. I strive for beautiful. That is kind of anti-modernism to be for beauty, but I am.”

Hill loves to travel around the globe for inspiration and said he draws with an international flair, which has helped him get in private collections around the world. During a recent trip to Brazil, he spent two days in botanical gardens and brought back those colors and energy while working on the pieces with Elder.

“I can draw so much here in our fine state, but it’s also nice to get the contrast of viewing things when you’re looking at them totally new and alien,” Hill said. “The different experiences, environments and languages find its way into my work.”

Hill is not a maximalist. He is fond of drawing with negative space.

“I like the idea of loading up in certain areas and leaving other areas open, really to kind of let the eye rest and go back and forth between the more active areas,” he said. “The active areas work because of the negative space. It is every bit as important.  It affirms the positive space.”

Hill said after working with Elder, he is inspired to work with wood on his own but their impromptu Melrose sessions will continue in earnest.

Visit pasnorman.org. Elder’s work is available at douglasshawelder.com and Hill can by found at instagram.com/skiphillart.