Beautiful: The Carole King Musical makes a stop in Oklahoma City on its popular national tour 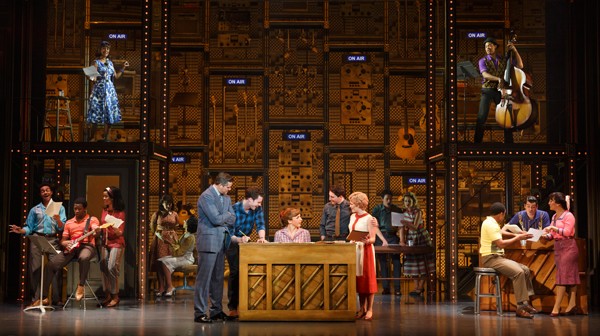 Randomly select a person off the street and they might not claim to know much about Carole King, the prodigious New York composer, songwriter and vocalist of the ‘60s and ‘70s. But they will almost certainly be familiar with her music — even if they don’t know they are.

The inductee to both the Songwriters and Rock & Roll Halls of Fame can take at least partial claim to timeless hits “Some Kind of Wonderful,” “It’s Too Late,” “I Feel the Earth Move,” “You’ve Got a Friend,” “(You Make Me Feel Like) A Natural Woman” and a cavalcade of other intensely relatable ballads and feel-good jams.

King’s journey from a teenager dreaming of show biz to her marriage with songwriting partner Gerry Goffin and the recording of her seminal 1971 album Tapestry is chronicled in the nationally touring production of Beautiful: The Carole King Musical, which begins its run Tuesday at Civic Center Music Hall, 201 N. Walker Ave., as part of OKC Broadway’s stage musical series. Songs from King’s early career are used to poignantly tell her life story.

The musical with an accompanying book by Douglas McGrath premiered in 2013 at San Francisco’s Curran Theatre. Its original 2014 Broadway production won actress Jessie Mueller a Tony Award for Best Lead Actress in a Musical and later scored a 2015 Grammy Award for Best Musical Theater Album. Beautiful launched its national tour in September 2015.

People are often unaware of not only how many of King’s songs they recognize, but how many they already love. Bockel, who said in a recent phone interview with Oklahoma Gazette that she was practically raised on King’s music, was asked to promote the show in several different cities and enjoys seeing faces light up with recognition to her words.

“I can kind of see people in the audience better than I’m normally able to,” she said. “It’s just great to see people’s faces light up when they recognize the songs. A lot of people don’t realize how many songs Carole King wrote, so it’s nice to play the first four bars of the intro and then all of a sudden, you kind of hear an ‘Ahhh’ gasp from the audience.”

Beautiful runs through Oct. 1 in Oklahoma City. It is OKC Broadway’s second production of the 2016-17 season and the last until Rent’s 20th anniversary tour makes its stop in November.

She was waiting tables and looking for theater work and an agent in her home city when she submitted an audition tape to the agency that now represents her. She was thrilled when the agency got back with her, saying not only that they wanted her, but they thought she would be great in Beautiful.

Bockel was aware of the show at the time and made someday earning the King role a personal goal, though it seemed like a distant one at the time.

“I thought in my head, ‘God, I would just love to play that role,’” she said.

The actress flew to New York several times for auditions and was eventually cast as an understudy in the King role and a member of the ensemble. She toured with the show for 18 months before taking a six-month break after the road life’s grind began to take a toll on her mental and physical well-being.

Still, when the show was looking for a new person to play King, she was delighted when they called her with an offer for the part. Beautiful’s current North American tour began Sept. 12 in Fort Worth, Texas.

To prepare for the role, Bockel said she watched just about every clip of King available on YouTube. She also read her autobiography A Natural Woman: A Memoir.

“[King’s] joy is so infectious,” she said, “I feel like it comes easy to get to live in her world.”

Bockel said King has given the show artistic license to interpret her character. The role is not intended to be an impression of impersonation of the singer, and each previous actress has approached the part in her own way.

Bockel sees it as both a challenge and a thrill to put her own spin on a role that other actresses have been praised for in the past.

“I’ve seen so many wonderful interpretations of the role, and they’re all equally great,” she said. “Now I get to create my own.”

“It’s Too Late” has functioned as the theme song to more than one of Bockel’s personal break-ups. She is likely not alone. Much of King’s music is known for being easily applicable to one’s own life.

“Her lyrics are so simple and concise,” Bockel said. “I feel like that’s what makes her so popular. You can really identify with her lyrics.”

The show always closes with King’s character singing “Beautiful,” a touching ode to confidence and self-worth.

Bockel said the song’s closing lines never fail to choke her up.

“I have often asked myself the reason for sadness,” the lyrics go, “In a world where tears are just a lullaby. If there’s any answer, maybe love can end the madness. Maybe not, oh, but we can only try.”

“It’s cheesy,” Bockel said, “but I feel like at the end of the show, I’m singing to all the women in the audience and telling them to love themselves and to go out and be kind to other people.”