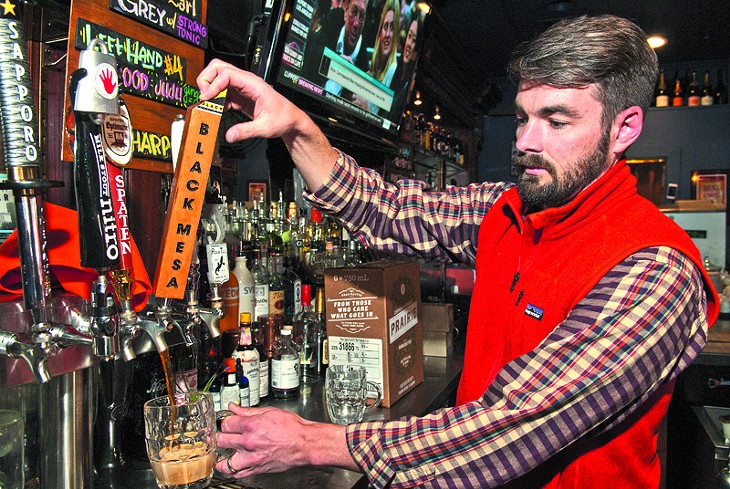 Oklahoma City-based Black Mesa Brewing Company won a gold medal at the 2014 World Beer Cup for its Endless Skyway Bitter. The World Beer Cup was established in 1996 to increase recognition for traditional beers around the world and award those breweries that produce excellent beer in 91 categories. Black Mesa won in the Extra Special Bitter category. ESBs are English-style ales similar in style to pale ales, and Black Mesa was judged the best of 57 entries from around the world. The award was announced in a ceremony in Denver on April 11. “If you can pick one medal to win as a brewery, this is the one. It’s the most prestigious beer competition in the world,” Brad Stumph, cofounder and co-owner of Black Mesa, said. Stumph and his co-owner and head brewer, Chris Sanders, were unable to make the trip to Denver, so they watched the ceremony on a live stream at Grandad’s Bar, 317 NW 23rd St., one of the first locations in the metro to offer Black Mesa’s beers on tap. Endless Skyway Bitter’s name is an homage to Oklahoma’s own Woody Guthrie. In addition to the ESB, Black Mesa also brews a blonde and a double ESB. The beers are widely available at establishments around the metro, including Grandad’s Bar; Picasso Cafe, 3009 Paseo St.; and TapWerks Ale House,121 E. Sheridan Ave. Black Mesa is still recovering from tornado damage it incurred on May 31, 2013. Currently, Black Mesa is brewed at O’Fallon Brewery in O’Fallon, Mo., but Stumph said the company is working on a plan to get back to brewing in Oklahoma City as soon as possible. Black Mesa was the first Oklahoma brewery to win a gold medal at the World Beer Cup, but another Oklahoma brewery was awarded a silver. Choc Beer Company, based in Krebs, won the silver in the German-style Sour Ale category for its Brewmaster’s Signature Gose. Gose is a German sour made famous around Leipzig, Germany. Choc’s president, Zach Prichard, said they discovered the style during a trade show trip to Germany a few years ago. Very few breweries still produce Gose, but Prichard managed to get some sample bottles while on the trip, and those bottles were used to help produce Choc’s version of the nearly extinct style. Prichard said he thought the beer would compete well, but he didn’t expect it to win a medal. “We’d entered it in a few competitions, including the last two Great American Beer Fests, and while it made it out of the preliminary rounds, it never medaled,” he said. The 2013 Gose was the medal- winner, so supplies in the metro are limited. All the kegs are gone, but Prichard said some metro liquor stores, including Freeman’s Liquor Mart, 4401 N. Western Ave., still have it.