The inaugural Oklahoma Brewer’s Fest will allow drinkers to sample from more than 100 beers, including many never before released from many of Oklahoma’s best breweries.

The festival, held June 26 at the Chickasaw Bricktown Ballpark will feature more than 40 breweries, ranging from large-scale breweries to homebrewers just breaking into the industry.

For smaller and brand-new breweries, the festival will be one of the first great opportunities in a long while to engage with beer lovers from across the state, Executive Director of the Craft Brewers Association of Oklahoma Tabbi Burwell said.

“First, they’re getting their name out there, so the public is seeing them maybe for the first time, or they see them maybe on social media but now they get to try their beer. I think it also gives the brewers this opportunity of knowing what the festival world is like,” Burwell said. “We’re estimating 2,000 people can be at this event, so having an event of that magnitude and keeping up with an event of that magnitude, I think that’s important to them.”

Charn Langford, CEO of Broke Brewing Co. in Oklahoma City, agreed that it’s important to have that exposure, especially as his brewery opened just before last year’s shutdown in March due to COVID-19.

“Getting back out, it’s great from a business perspective, the marketing and getting in front of fresh faces that may not have heard of you,” Langford said. “The other side of it is definitely just the community aspect of it. Craft beer is kind of an amazing little industry because it’s so fun and friendly.”

That community feel is what separates the craft brew industry from other industries that hold events, which Langford described as typically more business-driven and generally less fun.

“I think we’re really optimistic on the turnout. Early ticket sales have been really good, above expectations,” Lively said. “We see a great opportunity to put our beer into people’s hands that maybe have never tried it. Just sort of get that process of doing beer events and bringing the beer community together in Oklahoma.”

For Evan Smith, Co-founder and Operations Manager for Vanessa House Beer Company, he’s ready to get back out after well over a year without having participated in a festival. 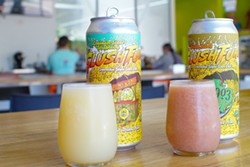 “We’re really excited just to get out and doing tastings again. We haven’t done a festival, because they usually start in April and May and we shut down right about that time last year, and they end in like October or November, so it’s been 18 months,” Smith said.

In addition to being able to gain exposure for his brewery and to create new fans of their beers, Smith said he’s always excited to bring the “latest and greatest” of their offerings, many of which don’t leave the taproom.

Although many breweries will be bringing fan favorites, organizers tasked most with coming up with something special for the inaugural festival.

“We have about 35 breweries out of the 42 that we have coming who are going to be brewing a beer just for the festival,” said Burwell. “The people coming to this event, the patrons, will be trying beer they’ve never had before and then there’ll also be some of their favorite beers.”

Smith said they’re participating and will be releasing a new variation of their recent “Slush Fund” beers, sour and smoothie-style beers, several of which are available at their taproom currently.

Langford said his brewery will be releasing a spontaneous fermentation beer, a process where wild yeast and bacteria is introduced through open air contact as opposed to selecting a domesticated yeast strain to start the fermentation process.

“It’s a one-off. It’ll probably run out when we’re at the festival,” Langford said. “If you’re not there then you’re probably not going to get to try it.”

Also participating, Lively said he’d prefer to keep the beer they’re bringing under wraps until its release at the festival.

General admission tickets are $45 and include a souvenir plastic taster. VIP tickets are $90 and include a commemorative glass taster, 30-minute early access before scheduled opening time, a festival T-shirt and a parking voucher for the Joe Carter Lot, just east of the ballpark.

The festival is for those 21 years old and older, and guests are subject to the ballpark’s clear bag policy.