When Warren, a local boy Marjorie has toyed with for years, turns his attentions to her kin, Marjorie shifts from tutoring to treachery as she hatches a scheme to ruin Bernice’s newfound happiness. 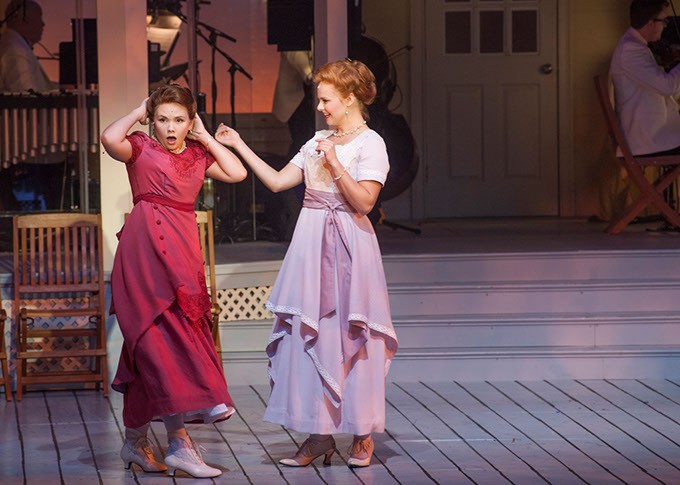 There are plenty of things that can destroy a musical comedy. It’s not anyone’s fault, really; there are just more moving parts than most mortals can artfully manage.

After all, music, dancing and comedy each rely largely on timing — a missed cue here, a clunky dance step there, and the whole contraption can grind to a halt before your eyes.

What makes Bernice Bobs Her Hair at Lyric Theatre of Oklahoma such a joy to behold is that everybody gets everything right. From the charm and skill of the cast and simple beauty of the set to Michael Baron’s seamless stage directions, Bernice hits its mark as a polished and funny crowd-pleaser.

Bernice Bobs Her Hair was first published in The Saturday Evening Post in May 1920. Based on F. Scott Fitzgerald’s second short story, the tale of a wealthy Wisconsin girl who spends August with her scheming cousin Marjorie, Lyric’s production, written by Adam Gwon and Julia Jordan, had its world premiere earlier this month in the Plaza District and runs through Saturday.

Bernice, played with lovely vulnerability by Celeste Rose, is a sheltered, socially awkward girl from Eau Claire, Wisconsin. Her cousin Marjorie (played by Sarah Quinn Taylor) fancies herself as anything but. Pretty, popular with the boys and plenty smart enough to be dangerous, Marjorie takes on her cousin as a project and schools her in the ways of new slang and easy manipulation of the local boys who swoon around her.

Bernice proves to be a quick study. When Warren, a local boy Marjorie has toyed with for years, turns his attentions to her kin, Marjorie shifts from tutoring to treachery as she hatches a scheme to ruin Bernice’s newfound happiness.

Taylor, a University of Oklahoma student, plays Marjorie with an evil glee that’s consistently funny but never overdone. She flips her hair and arches her eyebrows and shoots secret hand signals at her reserved cousin when she quotes Oscar Wilde, and Rose provides a terrific launching pad for her cutting lines and dramatic exits. Both actresses bring different, complimentary energies to their shared scenes, and the progression of their relationship from annoyance to begrudging trust to outright hatred is a pleasure to watch.

Oklahoma City University graduate Russell McCook plays smug and smirking Warren. He does a fine job delivering Warren’s lines with the cocksure bravado of a Yale freshman during the Roaring ’20s but makes his biggest mark on the performance when he sings. He has as fine and effortless a high tenor voice, and his first duet with Rose is nearly breathtaking.

The entire cast can sing, and the snappy songs are accompanied by a jazz band donned in white tuxedo jackets and featured prominently throughout the show. During the production’s more introspective moments, Rose’s solos are tenderly wrought, but both she and Taylor belt admirably when they square off against each other in one of their more pugilistic duets.

The supporting cast, especially the ladies, move well and know how to deliver a joke. One especially memorable song, “This Could Be Great,” gave Madeline Dannenberg, Virginia Newsome, Keslie Ward and Kaley Were a chance to deliver lines every bit as juicy as anything said by Bernice or Marjorie, and their timing was flawless. As evidenced by the show’s opening scene, the women work wonderfully as a group; their voices and interactions are faultless.

However, “The Girl From Old Eau Claire” might be the best number. Male cast members, giving brotherly advice to leader and ladies’ man Warren on how to handle the elusive Bernice, tell him in the chorus to smack her with a golf club. As Brandon Block, Travis James Burch, Hayden Gray and Stephen Stark (holding the golf club) line up and swing in unison, you can’t help but remember two things: One, it’s a comedy, and two, it’s a period piece set before women could vote, so maybe it’s not too far off from being historically accurate, unfortunately.

Delicate subject matter aside, the song is rollicking, Broadway-esque, and well choreographed, especially when Gray is given a chance to punctuate a provocative lyric with the most unexpected dance move of the evening. It ends on a rising swell of four-part harmonies reminiscent of great old musicals, and the fellas pull it off with gusto.

A good bit of Jordan’s dialogue and at least one of Gwon’s songs mention the women’s suffrage movement, but the show never really deals with the subject on anything deeper than a comic level. A duet between Marjorie’s parents, played wonderfully by OKC theater veterans Mandy Jiran and Vince Leseney, treats the desire for equality at the beginning of the 20th century more like a playful household spat than a political statement, and the number serves as a punch line as much as a political statement.

But maybe the best part of Bernice is that it doesn’t aim for (or ask for) too much. Lee Savage’s set is spare, beautiful and static throughout — save for two mattresses that appear and disappear throughout the show without notice — and serves as a blank canvas upon which the actors paint. There’s nothing distracting, nothing too messy or crowded. The costumes, designed by Jeffrey Meek, are period appropriate and beautiful, and they’re not so gaudy as to distract the audience from the cast’s skill and chemistry, something that might have been tempting to do, given the period.

One gets the sense that Baron’s gift lies in choosing what to remove from a production. With Bernice, he stripped just enough away to leave audiences with something pretty great: a good, old-fashioned musical that hits all the right notes.