With six locations already in operation, Fire Leaf has quickly become synonymous with medical cannabis in the Oklahoma City metro.

One of the first dispensaries to start selling medical cannabis after State Question 788 went into effect, Fire Leaf put itself on the map early by hosting patient drives at one of its two original locations, 7876 S. Western Ave. In exchange for signing up at its dispensary, Fire Leaf turned the investment in the patient recommendation back into a set of coupons valid at its locations, which directed patients back into the business and instilled familiarity with the brand early.

Its location in Stockyards City, 2501 SW 15th St., opened earlier in the year. The building had been in the family for decades but was remodeled from a storm shelter company to become Fire Leaf’s flagship store. The Doolittle family, which had become famous for its State Fair sweets over the past half-century, has now become synonymous with local cannabis.

“We’re just focusing on improving our operation and our stores, getting more products, talking to more vendors,” Cassi Doolittle said. “We’re never going to stop talking to patients and talking to vendors and improving our product selection.”

Inside the Stockyards location, a show kitchen allows patients to watch many of the infused baked goods and snacks being produced before their eyes.

“They actually meet with my store managers too, to pick their brains on what patients are saying, what the patients are asking for,” Doolittle said. “That communication, I think, is great because the kitchen staff’s not in the stores every day to know what the patients are asking for, where there might be a hole in the market of need, and so it’s so good having that communication. My managers can talk to the kitchen and be like, ‘People ask for this every day, and nobody’s doing it. Can we fill that need?’” 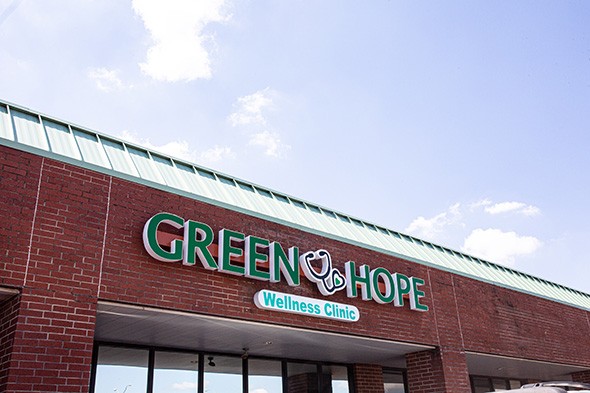 At a time when doctor recommendations were highly sought and hard to come by, registered nurse Renee Harper assembled a team of doctors and built an online appointment book. Patient recommendation appointments were set six minutes apart from one another with walk-ins allowed on certain days. What once became a waiting game of weeks shifted down to days, hours or minutes.

At the same time potential patients were having their applications kicked back to them for paperwork mistakes or photos that did not conform to requirements, Harper put a team in place to handle the license photos and upload user data for an additional $10. What once could be a stressful and time-consuming process soon became streamlined, with patients often walking in the door and then out with their information submitted within half an hour.

In the months since opening the clinic, Green Hope Rx, Harper’s dispensary, has opened a few doors down in the same shopping strip, and Harper recently launched Green Hopes, her nonprofit educational partnership with CBD Plus USA.

“Sometimes I think about the magnitude of how big it can be. And I’m like, ‘God, we’re just like the head of a pin right now,’” Harper said. “My endgame is research, research, research. I want to buy, like, Pauls Valley Hospital or something.”

Green Hope Wellness Clinic is still evolving, and even Harper does not know what final form it will take, but one of her next steps is kick-starting Blake’s Blessing, a line of cannabis products, with Green Hopes in honor of her grandson who recently died.

“The patients that we see here, I used to do consults and charge people $50 to consult with them and write a journal for them,” Harper said. “When the dispensary opened up, I decided to waive that $50. I bought a ton of Regina Nelson’s journals, and I just give them to the patient. And I put in there their specific dose, the target range and what they got, and that’s how we follow up as a dispensary. But I’m going to incorporate in my business model some kind of a follow-up.”