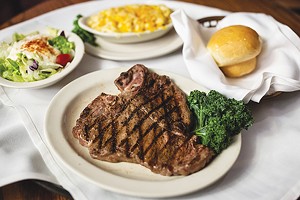 Cattlemen’s Steakhouse is one of those rare places that is beloved by both tourists and locals. It has been a staple in Stockyards City, the last active stockyard tied to a historic district in the country, since 1910. From basketball celebrities to sitting presidents, Cattlemen’s is often the first stop for people visiting Oklahoma City. It has even hosted a pair of food televisions celebrities — Diners, Drive-Ins and Dives’ Guy Fieri and Man v. Food’s Adam Richman.

6,000 pounds of beef: The restaurant breaks down its steak but also uses the product for hamburger meat and beef tips.

Bacon-wrapped filet mignon, rib-eye and top sirloin are the top three sellers on the menu. The blue ribbon specials are the highest increasing sales that are USDA prime, aged beef.

400 dozen eggs per week: Cattlemen’s is open for breakfast, too. In addition, it also serves 800 pounds of bacon and sausage per week.

109 years: Cattlemen’s first opened in 1910, and the owners have changed over the years, but it is the oldest restaurant in Oklahoma City.

33: The brand on the wall of Cattlemen’s represents the hard six (two 3’s) that Gene Wade rolled to win ownership of Cattlemen’s from Hank Frey during a gambling session at the Biltmore Hotel in downtown Oklahoma City. 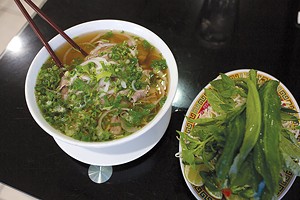 This family-owned restaurant is well established in Oklahoma Gazette’s Best of OKC tradition, taking home the title of best pho for many years. In 2019, it takes the crown for the city’s favorite overall Vietnamese restaurant.

It’s easy to see why. In addition to its eponymous pho, the restaurant offers other varieties of Vietnamese soup, vermicelli bowls and rice platters. If you don’t like pho, try hu tieu made with glass noodles or mi made with egg noodles. Banh canh is an udon noodle soup topped with fresh vegetables. Open 8:30 a.m.-9 p.m. daily, Pho Lien Hoa is there is take care of your needs no matter the time of day.

“We are very humbled and honored by the recognition,” manager Jim Phan said. “We work hard each day to bring the smiles to the customers from the quality of food and service. The recognition makes us more sincere and energized to work harder each day to serve our valued customers.”

17 hours
The time it takes to boil beef bones and other ingredients to make the pho broth.

P11
The combination of rare steak and lean brisket is the most popular of 19 types of pho on the menu.

24
From smoothies to che — a type of Vietnamese sweet dessert — Pho Lien Hoa has a bevy of options to cool you down or tempt your sweet tooth. 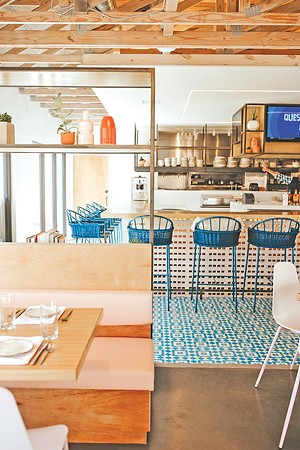 Tacos bring people together, and Oso on Paseo does its best to make sure everyone can enjoy its offerings.

In addition to its specialty tacos — highlighted by the showstopping brisket burnt ends with Dr Pepper barbecue sauce, pepitas and a fried pickle spear — Oso offers its take on classics like carnitas and chicken and uses high-quality ingredients to make them stand out.

Oso on Paseo comes from Humankind Hospitality, the folks behind Picasso Cafe and new Frida Southwest. Building off the success at Picasso Cafe that comes from offering a menu evenly split between meat and plant-based options, Oso offers four vegetarian tacos on its vegan-friendly stoneground tortillas (cauliflower, mushroom, sweet potato and nopales).

“I’m the kind of guy that likes to order the weirdest thing on the menu just because, but it kind of goes to show the awareness level of people while dining these days that they know what nopales are and are willing to try and reorder them,” said Shaun Fiaccone, Humankind Hospitality president.

The only enchiladas on the menu are vegan.

“The world is shifting more to that direction,” said culinary director Ryan Parrott of the vegan enchiladas. “Everyone is kind of leaning toward less animal products and being cognizant of what they’re eating. People should know that whether they are vegan, vegetarian or whatever dietary restrictions you have, you can come here and feel safe with what you’re getting.”

Oso’s appeal goes beyond its tasty tacos. The taco salad is served in an oversized crispy taco shell with housemade Catalina dressing. The Left Coast Burrito packs grilled shrimp, skirt steak and tater tots into a burrito with pico de gallo and queso.

It’s weekday happy hour 2-5 p.m. showcases its unique Baja Tiki cocktails, a term that Fiaccone has trademarked. A blend of bright colors and fruit, the drinks allow tequila and rum to shine in ways Oklahoma couldn’t have imagined in decades in the past.

“Things have gone really well since we opened,” Fiaccone said. “Honestly, we’re a lot busier than I anticipated.” 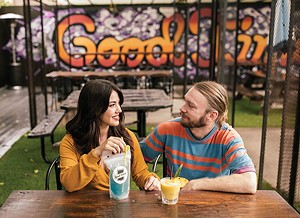 Whether it is hot or cold, the ample patio at Good Times, 1234 N. Western Ave., is packed with patrons surrounded by colorful street art-inspired murals.

In the summer, guests sip on frozen cocktails or cocktail pouches that are essentially adult Capri Suns to find relief from the heat. In the winter, plenty of patio warmers keep the party going outside.

“It’s real homey, welcome and laid-back,” said Good Times co-owner Zack Moore. “I think people like that. It’s a chill atmosphere. We’ve made a lot of regulars, and I’ve been blown away at how many people come by.”

The interior of Good Times is lined with Polaroid photographs of friendly patrons surrounded by memorabilia from years past like original Star Wars posters.

While the bar doesn’t have any beer taps, it keeps its selection rotating and offers frozen cocktails and adult Capri Suns, which sell for $10 and are equivalent to two drinks.

Good Times’ take on a Painkiller and an alcoholic Vietnamese coffee are permanent selections of frozen drinks, while other selections like French 75 and Cucumber Club rotate monthly.

“They sell well all year long,” Moore said of the adult Capri Suns and frozen cocktails. “We add warm cocktails for the winter.”

The food menu at Good Times is as accommodating as its drink menu. Serving what owners described as “stoner food,” the menu is adaptable for vegetarians and vegans. The chicken sandwich features a Doritos crust, which serves as the base for its Stoner Nachos.

Good Times offers both regular and vegan chili, a black bean burger patty and Beyond Meat crumbles. New items on the menu include honey Sriracha wings and a crunchwrap.

Before new ownership took over the location at Good Times, the site went through multiple concepts over the years, without gaining a permanent audience. Ownership has revitalized The Drunken Fry across the street, which they said has helped create the area as a destination.

“There is a lot of development coming around the area too,” Moore said. “There is the art studio next door, and there’s a bunch of luxury condos and apartments going up around in the next couple of years and it’s pretty cool. It will bode well for us.”