The summer heat is setting in, but something cool is happening at JRB Art at the Elms. Internationally acclaimed artist Billy Schenck will be at the gallery from 10:30 a.m. to 1:30 p.m. Sunday for the annual Prix de West brunch.

Schenck’s work is part of the gallery’s Best of the West exhibit and is featured along with Oklahoma artists Joe Andoe and Bert Seabourn.

Schenck’s work is infused with humor, as is his conversation, but his early life was not. His success is partly “a great big fuck you.”

“I grew up in an environment where I was constantly told I was incompetent, no good. It was my stepfather. He was a Hollywood cowboy — you’d recognize him, a TV cowboy from the late ’40s and ’50s,” Schenck said.

Schenck used art as a means of escape, tracing and drawing cartoons as a child. He had a rough upbringing, and he said his grades were bad because of it.

As a resort, he applied to art school and was accepted.

“It’s funny, but I remember thinking, ‘Well if I got in, this must not be a very good school,’” he said.

Schenck, who won’t tell you where he’s from, is the king of contemporary Western art, a genre he co-created in the 1970s after working at Andy Warhol’s Factory, the avant-garde New York art studio that was the gathering place for musicians and artists of all kinds in the ’60s and ’70s.

Schenck’s star catapulted to fame during the gritty 1970s New York years and has fallen and risen again in the decades since.

“New York was so rough and raw in the ’70s. I read memoirs by people like Patti Smith — who I had friends in common with — and it’s like reading my own history,” Schenck said. “It was the best, best era. You met such cool people, all young and on the make, and you could be a young artist. We all had illegal lofts. My (then) wife and I had one in a former golf factory.”

He left New York in 1975 because his career crashed, but since then, he has become the most widely collected artist in his genre. 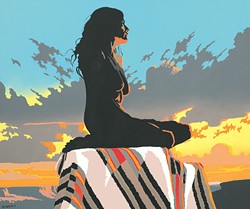 His work is internationally renowned and appears in the permanent collections of 48 museums.

“I use the deserts and denizens of the Southwest as a point of departure. The landscapes and the figures that pass through these late-dusk settings become metaphors for an earlier time,” Schenck said. “Through these figures, I hope to evoke an ionic essence of what it was like to live and die in 19th century American Southwest.”

Bert Seabourn works in paint and printmaking. Experimenting in many mediums for more than 50 years, he exhibits throughout the U.S. and many other countries and has work in public and private collections — including The Vatican Museums’ Collection of Modern Religious Art and Smithsonian Institution National Museum of Natural History — internationally.

Joe Andoe, who grew up on a farm in Tulsa, paints landscapes and animals. He earned an MFA from the University of Oklahoma and has lived in New York City since the ’80s. He is also an author and a filmmaker. He has paintings in collections throughout the United States, including The Museum of Modern Art in New York.

Print headline: Southwest color, World-renowned artists saddle up to JRB Art at the Elms for brunch.