Upstage Theatre explores the hidden meaning in the words and life of Eva Perón. 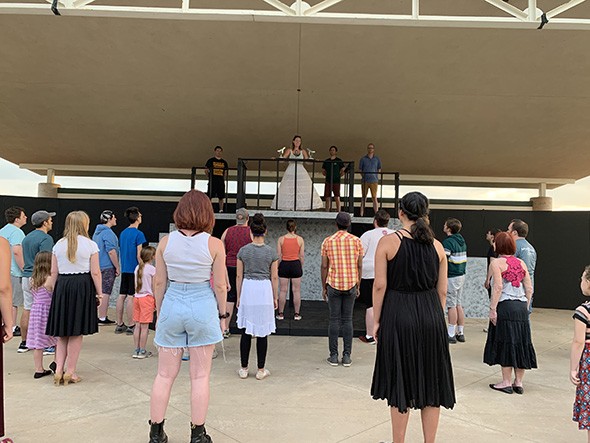 A musical of disputed historical accuracy about an Argentinian actress who became a powerful leader in the 1940s might teach us something about America now.

“The show is about a very sort of heated time in Argentina, when it came to politics, and how Eva Perón was someone who was loved by half the people and hated by the other half, and that polarization of her we felt really connected with what’s going on in our country right now,” Towne said. “One of the things that we can learn in the year 2019 is not to be fooled, not to be mesmerized by the glamour of people, especially celebrities or politicians. … It can be something that’s very hypnotic to us. But you always have to really look at, What are they actually saying? What are they actually doing? What are their actual intentions? Are they saying anything? In the case of Eva Perón, there’s a line in the show that says, ‘She didn’t say much, but she said it loud,’ and I think that says a lot about the show right there and a lot about her, in that she was very mesmerizing. She was very beautiful and glamorous and adored by the working class people, but when it came right down to it, she herself didn’t affect a lot of change.”

Evita tells the story of Perón’s rise from poverty to become the wife of Argentine president Juan Perón and an influential and controversial political leader before her death at age 33. Towne said he and artistic director Jenny Rottmayer have wanted to stage the musical for a long time, with Rottmayer playing the title role.

“It’s something we’ve always wanted to do together, and do in this way, so it’s been a long time coming for both of us and sort of a dream realized for both of us,” Towne said. “I think that the music and the score is Andrew Lloyd Webber’s best. He’s sort of dogged on a lot in the musical theater community for various reasons, but I think this score, and it’s one of his early ones, it’s the most consistent. … And I’m fascinated with [Eva Perón] and what she was able to do and sort of this idea of, ‘Was she a saint, or was she this awful person, just disguising herself?’ I think that sort of juxtaposition makes her a really interesting character and really makes for an interesting story. I told the cast on the first day, my goal was I want the audience to walk away going, ‘I don’t know how I feel about her.’ I don’t know if I love her. I feel bad for her. She died so young with cancer, and … she did some great things and she did some horrible things. I think just showing that she was a human and she was just trying to survive and get to a place where she could get out of poverty and realize her dream makes her a very flawed, interesting and fun character to walk with through the evening.”

Eva Perón was popular with poor and working-class Argentines, working in an unofficial capacity as the country’s secretary of labor and health; helping to establish schools, hospitals and orphanages; forming the Peronista Feminist Party and securing women’s right to vote. On May 7, the 100th anniversary of Eva Perón’s birth, 100 Argentine women marched in the streets dressed as her. While some critics say Evita paints an inaccurate and unflattering portrait based on accounts written by her detractors, Towne said he has been studying the real-life figure to add more nuance to the production.

“It’s not completely historically accurate,” Towne said, “but I really delved into the research, reading books, watching documentaries. There’s lots of YouTube clips online of her giving speeches and traveling to other countries, so that was one thing that was important to me and that was important to the cast, was that we be as respectful of her, of Argentina, of the culture, of the people, and that we be as authentic as possible. Because I felt that that was just the right thing to do for her memory and for those people down there that still, to this day, celebrate her and her memory.”

In addition to navigating the complexities of staging a musical based on a significant historical figure, Towne said Upstage Theatre is contending with the difficulties of staging an outdoor musical in Oklahoma.

“We’ve been dealing with the weather and moving the rehearsal schedule around to accommodate all the rain and all the storms, so that’s been fun,” Towne said. “The heat, as we get further into the summer, it becomes a problem, but the theater itself is not set up for a theatrical space, necessarily, so we have to bring everything in. We have to bring in all of the wood, the walls, the set itself, all of the lighting and sound equipment. We have to basically bring everything in, set it all up and then tear it down every year. ... We have to make sure every set piece and everything is just secured down, glued down, stapled down because the wind will just carry it away. There’s a lot to think about.”

The cast also includes Jay Sampson as Juan Perón and Aaron Kellert as everyman narrator Che, who Towne described as “not a character so much as he is a storytelling device.”

“He gets to comment on all of the action, all of the plot, and he gets to give us sort of that other side of her or people’s opinion of her,” Towne said. “He allows the audience to see behind the mesmerizing and the glamour and the show that she put on. … What he does is he kind of pushes that aside and says, ‘OK, but here’s what’s really going on.’”

Not all of the characters in the musical are so forthcoming with their actual thoughts and opinions.

“I tell the cast we have to say one thing and mean something else because there’s a lot of sarcasm in the show, a lot of reading between the lines,” Towne said. “She’s saying one thing and meaning another, and how do you play that on stage and make that clear to the audience? That’s tough to do. … We’re still in the middle of rehearsals, we’re still figuring a lot of that out, but finding that balance has been fun and has been challenging.”