New options make it easier to eat healthy when going through the drive-thru.

The trip through a fast-food drive-thru window doesn’t have to be an unhealthy indulgence. What happens when you’re trying to limit your meat intake, stay healthy on a road trip or are too busy to go to a sit-down restaurant or make a meal for yourself?

The recent addition of the plant-based Beyond Meat burger nationwide at Carl’s Jr. / Hardee’s (depending on which side of the Mississippi River you’re on) and Oklahoma Del Taco locations is welcome news for those following vegan and flexitarian diets. Taco Bell, which has long been a favorite for vegans for its easily customizable menu, is expanding its vegetarian options later this year, according to a company release.

Taco Bell’s menu can easily be turned vegetarian by substituting meat with black beans or its crispy potatoes, but black beans offer protein the potato doesn’t really provide. Trying to ensure correct substitutions through a garbled drive-thru microphone can be a harrowing experience. I recommend using Taco Bell’s mobile app, where customization is as easy as a few pushes of a button. Taco Bell replaces all dairy products like sour cream and other sauces with a fresh and tasty pico de gallo by ordering an item “fresco style.” The Crunchwrap Supreme ordered fresco style with black beans instead of beef is a satisfying Taco Bell option, but the Power Menu veggie burrito with guacamole is probably the best and most filling option for anyone on a vegan or plant-based diet at Taco Bell.

In a January press release, Taco Bell said it is also working to improve its recycling efforts and will make its beef sustainable.

The nation’s second-largest quick-service Mexican restaurant, with 580 locations in 14 states, unveiled the Beyond Taco at seven locations in the state in Edmond, Yukon, Norman, Moore and Oklahoma City. Beyond Meat, which is a proprietary blend of pea protein and oils that is GMO-, soy- and gluten-free, can replace any protein on the menu in items such as burritos and nachos, but the company is heavily advertising the Beyond Taco and Beyond Avocado Taco.I grew up going to Del Taco in Southern California, but this most recent trip was my first visit since stopping by its OG location outside Barstow on a trip from Las Vegas nearly a decade ago. It seems its new parent company has placed an emphasis on freshness, and the server calls your name with every order like a Starbucks barista. 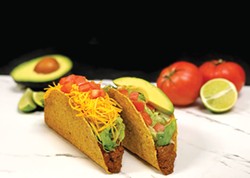 I tried each of the Beyond tacos ($2.49 each), which come in crunchy shells along with a soft taco of the traditional beef. Del Taco’s website says the Beyond Meat is flavored with ancho chili, onion, garlic, lime juice, oregano and cumin, and that came through in the final product. It had much more flavor than the beef, but the texture of the Beyond Taco was much more mushy, like it was cooked too long.The Beyond Taco actually has more overall protein (19 grams) than its meat competitor but has higher sodium (510 versus 320 grams). The avocado taco is vegan-friendly because it is served without the sizeable amount of shredded yellow cheese.

The Beyond Meat at Del Taco didn’t exactly mimic the meat version in texture, but it blew it out of the water in terms of flavor. I would not hesitate to order it again.

White Castle became the first popular fast food brand to introduce the plant-based Impossible slider to its menu, but it only offers it at regional locations. When Carl’s Jr. / Hardee’s unveiled its Beyond Meat Famous Star earlier this year, it became the first nationwide quick-service restaurant to serve Beyond Meat. Burger King has offered a veggie patty that is as bland as the rest of its food for years, but Beyond Meat is different because it looks and tastes like a burger, holding up when cooked on a flattop or grill.

Just like at Del Taco, the Beyond version offers slightly more total protein (30 grams to 28) than the traditional Famous Star that has everything on it, including cheese. The hallmark of Carl’s Jr. burgers is the charbroiled flavor from the open flame on the grill. The flavor is more present on the Beyond Meat version ($6.49) than on the beef version ($4.49), and the Beyond Meat patty is much thicker than the beef one. To make the Beyond Famous Star vegan-friendly, order it without cheese and mayonnaise.

Beyond Meat versions won in a head-to-head battle. tweet this

While I preferred the texture of the beef at Del Taco, the Beyond Famous Star at Carl’s Jr. won in a landslide. Not only was it more toothsome, it tasted better. You can add a Beyond Meat patty to any sandwich, chicken or beef, at Carl’s Jr. for a $2 upcharge.

Beyond Meat is available at retailers like Target, Sprouts Farmers Market and Natural Grocers on N. May Avenue. It is sold at Carl’s Jr., TGI Fridays, Whiskey Cake Kitchen & Bar and The Press, 1610 N. Gatewood Ave.