Megalodon: Largest Shark That Ever Lived separates fact from fiction. 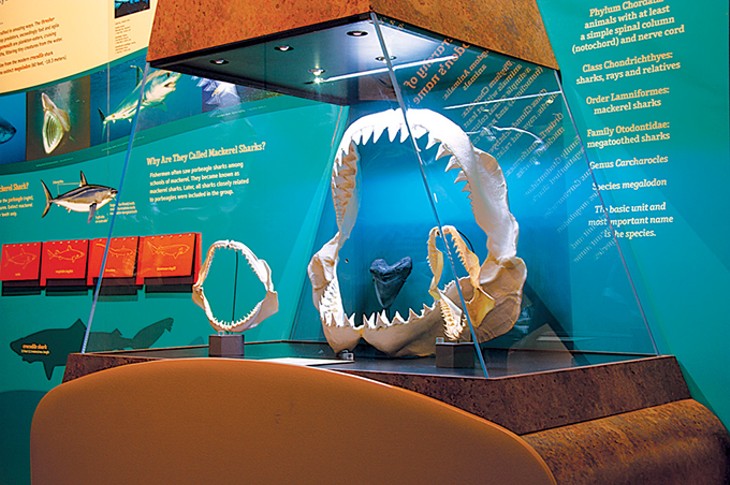 Though his net worth and killer business instincts help celebrity businessman Mark Cuban figuratively eat fledgling entrepreneurs alive on Shark Tank, the outspoken billionaire would be a literal snack to megalodon, the real king of sharks.

“As a human, you would just be an hors d’oeuvre,” said Kyle Davies, a museum preparator at University of Oklahoma’s Sam Noble Museum in Norman.

Megalodon, which reached 60 feet in length and 50 or more tons in its largest known form when it last swam oceans around 2 million years ago, has long had a hold on mankind’s imaginations. But megalodon fever seems to have grown to its own epic scale in recent years, fueled partly by the popularity of the controversial 2014 mockumentary Megalodon: The Monster Shark Lives, which Discovery Channel ran as part of its annual Shark Week programming. The television special depicted a fictional search for a living megalodon but presented it in the style of a factual documentary without much indicator that the film was intended as entertainment.

The buzz has continued to grow from there and might be meeting its apex Aug. 10 when actor Jason Statham’s Jaws-channeling summer thriller The Meg hits movie theatres.

Outside pop culture, megalodon is also the toothy subject of the touring exhibition Megalodon: Largest Shark That Ever Lived, open through Jan. 6 at Sam Noble Museum, 2401 Chautauqua Ave., in Norman. The exhibit was developed by Florida Museum of Natural History in Gainesville with support from the National Science Foundation.

Excitement surrounding megalodon has perhaps never been higher than what it will be this summer, but Davies said Sam Noble Museum didn’t necessarily plan for its turn with the exhibit to overlap with The Meg’s film release.

“To be perfectly honest, we lucked out,” he said. “You have to schedule these things about two years in advance of actually getting them.”

Pop culture helped raise the shark’s profile, but mankind has been fascinated with the ancient creature since first finding its fossilized teeth (the largest being more than 7 inches long) over 1,000 years ago.

It is natural that people would be drawn to a colossal predator like megalodon. The sharks alive today are fascinating enough, so imagining one nearly as long as two school buses is a lot to think about.

“When people are doing anything in the natural world, they always start asking, ‘What’s the biggest and what’s the smallest?’” Davies said. “And when you start talking about sharks, megalodon is the biggest shark that we know.”

Aside from its sheer size, megalodon also earns naturalist cred for the clear power behind its mighty jaws.

“Let’s be honest,” Davies said. “Humans are fascinated by things that want to chomp on you.”

Visitors to the Megalodon exhibit can actually step inside a reconstructed model of the creature’s enormous jaws — if they dare. The full display is packed with scientific and historical accounts of the creature.

Davies said a major goal of the exhibit is to tie megalodon in with the conservation challenges facing many contemporary sharks.

“Modern sharks don’t actually have a fast reproductive system,” he said. “So if you overfish them, it takes the populations a fair amount of time to recover.”

Megalodon is often depicted as simply a larger version of the popular great white shark, but truthfully, no one really knows what the creature looked like. Because shark skeletons are made of cartilage, they are not preserved on the fossil record. All scientists have to observe are their enormous teeth, and megalodons’ size has been calculated from there with knowledge of living shark species.

One thing scientists do know about megalodon is that it was a big eater. Great white sharks are known as fearsome predators, but megalodon makes those sharks look meek.

“A great white would just be less than a day’s meal [for megalodon],” Davies said. “You would have to eat a couple of those if you want to be satisfied.”

Megalodon most likely fed on whales, large marine mammals and even other megalodons. The shark swam the oceans from the Early Miocene to the end of the Pliocene periods. Megalodon died out long before the first humans walked the Earth.

“Now, if it was lucky, megalodon could have eaten some of our ancestors like Homo erectus,” Davies said.

The shark might have had a role in eating itself into its own extinction. Davies said scientists have found the end of megalodon seems to coincide with the transition of whales from their larger prehistoric versions to the smaller, faster whales we know today. There is reason to believe whales evolved into more elusive versions of themselves in order to evade the lumbering megalodon. Many whales even became cold-adapted and moved to waters near the Arctic far away from the warm-watered megalodon.

Once whales became a scarce food option, it is likely that the shark could not scrounge up enough food to support itself.

“If you’re not getting that regularly, you starve to death,” Davies said. “And you yourself become a big pile of meat.” 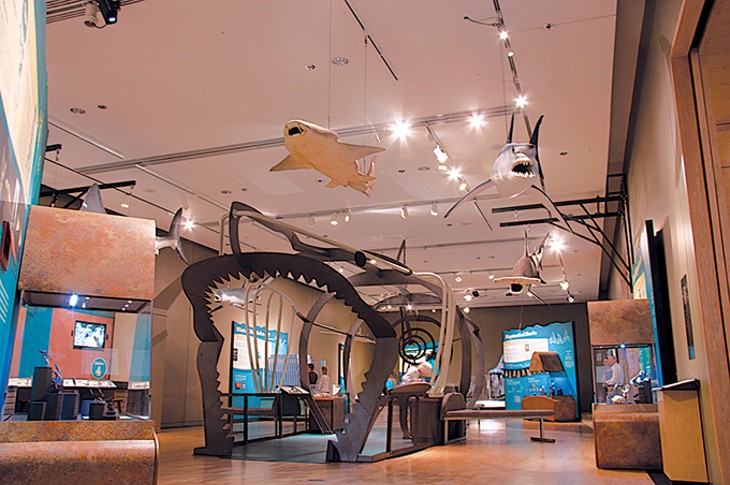 The ocean — and particularly its dark and mostly unexplored nautical depths — is full of mystery. There are all sorts of bizarre-looking creatures swimming around the ocean floor. Could it be possible that there is a living megalodon hiding somewhere unnoticed by man?

Davies said he is skeptical of the possibility.

“It would be a complete change in the animal for it to become adapted to be in those super-deep oceans where we wouldn’t have seen it,” he said.

The ocean’s deepest waters are not only incredibly dark, but cold. As the fleeing ancient whales likely noticed, megalodon appears to have not liked the cold very much.

“While you find megalodon [teeth] around the world,” Davies said, “you never find it outside of the temperate zones.”

The colossal shark is very much alive in the sea of our imaginations. But Davies said the notion that one might find megalodon anywhere other than the silver screen should go extinct.

Megalodon: Largest Shark That Ever Lived