City of Oklahoma City rolls out a new recycling plan that benefits household residents and the city. 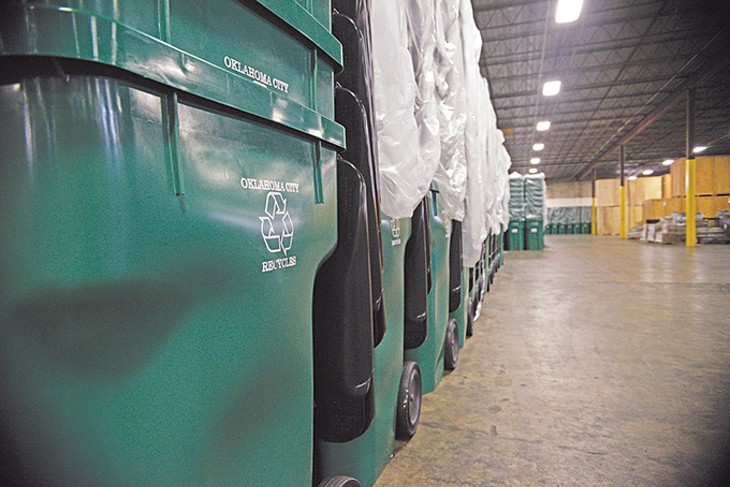 While arguably national and local perceptions about recycling have changed since 1994, the City of Oklahoma City records household participation in its “Little Blue” recycling program at 23 percent. City staff sought to uncover the barriers keeping residents from recycling.

“We found in our research that having the Little Blue program was an impediment for some people,” said Jennifer McClintock, public information officer at the city’s utilities department. “They didn’t want to recycle because [the bin] wasn’t large enough or they didn’t because it was an open bin that contributed to trash blown around the neighborhood.”

The new carts are already popping up in Oklahoma City neighborhoods as crews drop them at the curbside in anticipation of the new services. By the end of the month, 195,000 carts will be delivered. The city anticipates serving 192,000 of its 202,000 household customers. About 7,200 rural recyclers moved to the curbside recycling program as part of the new plan.

“Once we went to the public with the idea of larger cart recycling, it was overwhelming with between 70 to 80 percent [of respondents] very supportive of transitioning away from Little Blue,” McClintock said. “Now, the opinions and feedback from the public have been overwhelmingly positive. They aren’t even using them yet.”

It is well known that recycling programs produce environmental benefits. In Oklahoma City, where the city’s population is growing and is estimated to reach 810,000 residents by 2040, recycling is crucial to reducing landfill intake, said McClintock.

“Our population is growing around 1.3 percent annually,” she said. “We want to be able to sustain those landfills and not look at other options, those two options being either a new landfill, which would be very costly and politically a little contentious, or transport all the trash outside of the city and move it to another location — again, costly.”

There are other benefits for the city, including improved employee safety. Under the current program, employees run house to house, manually emptying the blue bins into the trucks. A new fleet of recycling trucks will arrive in June; this fleet will look similar to trash trucks with a mechanical lifting arm to pick up the green recycling carts.

Waste Management Services’ Materials Recovery Facility, where OKC’s recyclable materials are processed, will undergo renovations to allow for a single-stream system. Once complete, the recyclables will be sorted by machine. The items are later sold.

"Whether you fill it with the right stuff or not is the challenge." Maureen Turner tweet this

In 2012, the City of Tulsa rolled out its residential curbside program in which residents placed recyclable materials in 96-gallon blue recycling carts. Six years later, 109,000 households are recycling, according to Maureen Turner, manager of Tulsa’s Reuse and Recycle Systems and a board member of Oklahoma Recycling Association.

“One of the biggest challenges we had — and I think Oklahoma City will see it as well — is when you have a 96-gallon cart, it is very convenient to fill it up,” Turner said. “Whether you fill it with the right stuff or not is the challenge. It takes several years of education.”

In the first six months of the Tulsa program, recycling crews were finding metal ironing boards, glass mirrors and aluminum car parts, among other things, in the carts. Those items were not accepted, as they didn’t meet the collections requirements.

In addition to public awareness and education efforts around the new program, Tulsa recycling leaders connected with neighboring municipalities. Together, the Tulsa metro communities agreed to recycle the same materials, which lessened the chance of confusion among residents who lived in one community and worked in another, Turner said.

As new residents move in, Turner and her staff stand ready to pass along literature about the recycling program and answer any questions.

“The most successful recycling programs — the ones that have been around for 10 to 15 years or longer — its participants don’t remember not recycling,” she said. “At the beginning, everyone remembers a time when they didn’t recycle or barely recycled.”