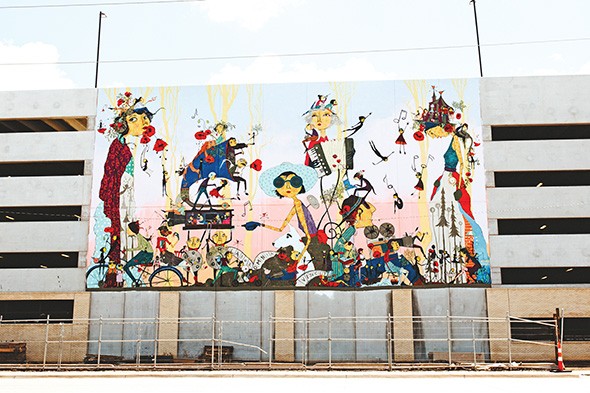 Visual artist Denise Duong compared painting a mural on the side of a parking garage to cliff diving. Before adorning two walls of the roughly 40-feet-tall West Village Parking Garage, 927 W. Sheridan Ave., with her vivid murals titled “Life in the Light,” Duong had never worked on a project of that scale, but she said she does not shy away from new experiences.

Scaling a mountainside is an apt metaphor for the mural, which was the first artwork that required Duong to wear a safety harness and withstand the strong Oklahoma winds while standing in an elevated lift.

“I painted it in wintertime, and oddly enough, it wasn’t the snow or the rain — they set me off for a couple days — but the hardest part was that wind rocking that thing back and forth,” Duong said.

When Duong saw the open call for artist proposals for a mural on West Village Parking Garage, she saw the chance to challenge herself, but she did not expect to be chosen.

“I saw the opportunity available and I was like, ‘Oh, man! What an amazing space to be able to create the biggest piece of your life on,’” she said. “‘What a challenge that would be.’ There’s so many amazing muralists in Oklahoma, I didn’t really go in thinking that I would get it.”

Things, once I’m up there, kind of make a life of their own, and then I’m like, ‘Well, I’ve just added two more weeks to my project because I added this many figures to it, but it was worth it. I love it. I loved working on it.’Denise Duong tweet this

The project’s magnitude required her to reconsider her usual loosely structured and improvisational approach to art.

“I have a general idea of what I’m doing, but I don’t really have, like, everything planned out,” Duong said. “I kind of wing it most of the time whenever I’m doing murals, but this one, because I needed to get a gauge of scale so I had the idea of where I wanted the bigger figures …  it was basically the same process but a little more technical, I would say. I’m still learning, I feel like, because I’m like, ‘I don’t know what the hell I’m doing.’”

While she had to carefully plot and position the larger figures in the mural, she was still able to add smaller pieces as she thought of them.

“I was comparing what I originally had planned to do and then the addition to it,” Duong said, “and it was substantial, very substantial because I sketched out the large-scale figures; I didn’t sketch out all the tiny little stories within them. Things, once I’m up there, kind of make a life of their own, and then I’m like, ‘Well, I’ve just added two more weeks to my project because I added this many figures to it, but it was worth it. I love it. I loved working on it.’”

Sometimes the new figures, which were not as carefully mapped out, needed some size adjustments.

“Going to the bathroom is when you realize you’ve made mistakes, scale-wise,” Duong said, “because I’d go across the street to the Taco Bell bathroom or the convenience store bathroom and be like, ‘Oh, god. She has, like, T. rex arms compared to her head. I’ve got to go back and fix her arms.’”

Even with the additional time spent painting and adjusting new figures and time lost to inclement winter weather, Duong finished the project in a little more than two months, ahead of schedule and without help.

“I was told, ‘How does it feel to be the fastest muralist in Oklahoma?’” Duong said. “And I was like, ‘I didn’t know this,’ but I would say that I did accomplish a lot more than I thought in the time that I had. I was recommended to get a group of people to help me, but then I realized I don’t know how to have a group help me whenever I don’t even know what I’m doing up there because I’m just kind of winging [it with] so many characters and things happening that I didn’t know how to delegate jobs. I would be the most annoying person to work for because I don’t know what I’m going to do in, like, the next five minutes.”

Duong drew inspiration from Film Row’s history of industry, film and music as well as its present as the home of The Jones Assembly and deadCenter Film Festival. She was also inspired by the birth of a friend’s child and Oklahoma’s unique weather and landscape.

“Oklahoma skies are just incredible,” Duong said. “You have the sunrise and the sunset, and it’s just like nothing you’ve experienced anywhere in the world. It’s just gorgeous. … One evening, we had those orange skies, and some mornings you’ll have this crazy neon pink-purple sky. … I love it.”

When Duong said Oklahoma skies are like nothing in the world, she was speaking from experience. She has exhibited her work in Seoul, South Korea, and is currently working on a series of paintings inspired by a trip to New Zealand and a hike around Lake Havasu in Arizona. A 2018 episode of PBS’ art show Gallery America discussed her travels in Asia and Africa and a hitchhiking trip across the United States. However, Duong has only seen a screenshot of the episode.

“A friend sent me a picture because I hadn’t seen it yet,” Duong said, and I was like, ‘Oh, wow! They acquired a picture of me smoking hash. Cool. My family will be so proud.’”

With the completion of “Life in the Light,” Duong has not only created art on a scale she had previously never attempted; she has added a new tool to her artist’s kit.

“I learned how to drive and move the lift, and once I felt more comfortable controlling it, I was like, ‘This is amazing,’” Duong said. “It was great. I could move wherever I wanted. I mean, I had to stay away from the electrical lines. …  I had no idea how to run the thing, but I learned very fast. … I don’t look at lifts the same. I’ll drive by and look and be like, ‘Oh, that’s the Genie S85.’ Then I’m like, ‘Oh, god. I’m a lift nerd.’”

Duong’s art can also been seen at her Little D Gallery, 3003A Paseo St. Visit deniseduongart.com.