As the two-lane highway veers left near the intersection at NE 178th Street, Wilson Field comes into view. On any given Friday in the fall, the sound of cheering high school football fans regularly surges and ebbs over the town, which boasts a population of 1,221 residents. A referee whistles, taps tick off a snare drum and cheerleaders chant as the crowd hollers.

Four stadium light posts illuminate 30 players in black jerseys with “Lions” printed across their chests. The stands resemble a checkerboard with shades of Luther red and black throughout the hometown crowd. The Class 2A team went undefeated in the 2015 regular season and earned the title of district champion.

“We always laugh and say the stadium is too small,” said Sydney Scheer, 2016 Luther graduate and former team manager. “It was too small when it was built. Parents come Thursday nights to put tape down to mark their spots. It’s first-come, first-serve, but you have to get there earlier to get your seat.”

On the Fridays the Lions are on the road, Luther becomes an even quieter, sleepier little community located 15 miles east of Edmond and 30 miles northeast of downtown Oklahoma City.

Parents and fans gather in the school parking lot to tailgate hours before away games. They decorate cars, make signs and sing the school fight song. Together, parents and fans caravan along Oklahoma roadways to schools like Crooked Oak and Millwood.

“We hoot and holler the whole way,” said Tracy Pridemore, mother of a Luther player and president of Luther’s Touchdown Club. 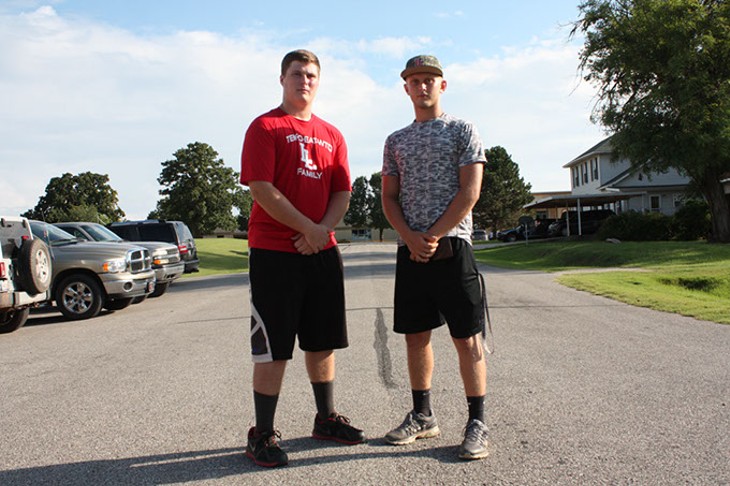 High school football is no-nonsense in the Sooner State. On Friday nights — in stadiums dotted across all 77 counties — high school athletes stride onto fields with dreams and goals.

Some dreams come true and some don’t, but memories last a lifetime.

Football players Chad Pridemore and Blake Christy have too many Luther Lion memories to count. The two upperclassmen and leaders of the 2016 squad started in peewee football, listened to their volunteer coaches and learned the game. They also tried to replicate the moves of their idols: the players on the field the Friday before.

“Friday nights were it,” Pridemore, senior quarterback and the son of Tracy Pridemore, said. “I would have my little league jersey on. My teammates and I would all mess around during those games.”

Football caught Pridemore’s attention at an early age. His parents graduated from Luther Public Schools. He recalls hearing many Luther stories from his father, a former quarterback, and his brothers, who also played. For the Pridemore family, football is tradition and the Lions jersey is a badge of honor.

Christy, a junior offensive and defensive lineman, came to football another route. After losing his father when Christy was young, he eagerly awaited his opportunity to join the youth team. At his mom’s request, he didn’t begin playing until he was a third-grader, a year after his peers. From the stands, no one can tell Christy had a late start as the teen comes up from making big tackles.

During those moments, Christy glances toward the stands.

“You think to yourself, ‘These people came to watch us,’” Christy recently told Oklahoma Gazette. “You can’t believe it. It is something you will never forget. To hear the crowd scream when you score a last-second touchdown, you know the whole town is right behind you and has your back. After (the game), you hear people say, ‘Good game.’ People you don’t even know.”

“We have 50 people, but we plan for 100,” Tracy Pridemore said as she watched players make their way through the buffet line at First Baptist Church Luther. “They come through the line twice.”

Fried chicken, mashed potatoes, bread rolls, salad and cookies were spread across the church’s kitchen counter the day before a game against Wellston, a Route 66 foe. Donations from parents and Luther congregations make these meals a reality.

On Fridays, club members meet to make hundreds of sandwiches and place homemade cookies and chips into bags. After games, parents give the sack lunches to players. During the week, club members also assemble player goodie bags often filled with treats and messages of good luck.

The club stands ready to assist the players and coaches in any way, win or lose. Although, after winning four games three years ago and six the following year, the parents and community were ready for the team’s 11-1 season.

“It was off the charts. We were so excited for these boys,” said club member Patrice Christy, Blake Christy’s mom. “We’ve been with them since little league; you see them develop. We are one big family. To see the boys accomplish what some of them thought was only a dream was beyond belief.”

Win the day, which was last season’s mantra, has stayed on Blake Christy’s mind for this year’s 10-game regular season. The 6-foot-2-inch teenager said the motto gives him and his teammates the confidence and determination to achieve on and off the field.

While players still drop the phrase into everyday conversations, this season’s mantra is “#MyTown,” which is a tribute to those on Wilson Field and the immense support and loyalty shown by fellow classmates, player families and the Luther community.

Throngs of parents attended his first parent meeting. The former college football player said he had never seen parent meeting attendance as high in any other community he has been in.

“I wanted people to see that I am proud to be a part of the Luther community. Also, I wanted the team to demonstrate that same pride,” Smith said about #MyTown. “We have great facilities and great people. We are proud to be from Luther.”

Smith’s coaching philosophy is simple. He coaches each player the way he would coach his own child. It works, because in Luther, the football team and its supporters view themselves as a family.

“They really are a family,” said Scheer, who covers the high school sports beat for The Luther Register. “It isn’t just players, but parents and many that are not parents. People just want to help the team.”

Luther is a place where churches outnumber businesses and most residents hold deep roots. The town has fallen upon hard times. In January, Wal-Mart pulled out of its new neighborhood market store. State budget cuts, coupled with what many say are poor decisions among district leaders, have negatively impacted the district, which now does more with less.

“Despite all the bad things people said about Luther last year, one of the good things was this football team,” Christy said. “People look forward to Friday nights in Luther.”