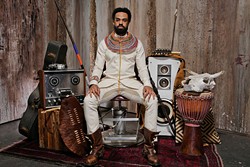 When neo-soul and R&B singer Bilal returns June 11 to Ice Event Center & Grill, it will be as a Grammy-winning artist.

Bilal first played at Ice, 1148 NE 36th St., in May 2015. In February, he won a Best Rap/Sung Collaboration Grammy for his work on Kendrick Lamar’s tune “These Walls” with Anna Wise and Thundercat.

This time around, Bilal performs as part of Ice’s 3xDope performance series. Doors open at 9 p.m., and the show starts at 10 p.m.

Bilal has a long history producing creatively challenging and critically praised music. His debut album dropped in 2001. He has since stacked up a number of projects and appearances and worked with artists such as Common, Jay Z, Erykah Badu, The Roots and Robert Glasper.

Ice owner Marc Flemon said he has met few big-name entertainers who are as well grounded as Bilal.

“You talk about down-to-earth,” Flemon said. “Sometimes you book people; they’re in, they’re out. This guy was extremely personable, and we had a lot of fans who showed up for that show.”

Against the odds, Flemon has turned the small restaurant and venue into a northeast Oklahoma City destination spot for high-profile artists from a variety of fields. Music acts Keyshia Cole, Dwele and Chrisette Michelle have performed there, as have comedians Tommy Davidson and Damon Williams.

Flemon said his performer roster is something he has been able to build over time simply because he sets his sights high.

“I’m kind of a bold person,” Flemon said. “You have to tell me no because I’m never afraid to ask.”

Bilal was one of the first acts Flemon booked as he worked to create a space for intimate and personable performances by big-name artists. His show in 2015 was successful, and Flemon kept in touch with Bilal’s camp and hoped to invite the musician back.

“If you treat the artist with class and respect … they’ll support you and they’ll help you get other artists,” he said.

His higher education background is part of what informs his mission at Ice. He wants his restaurant to represent entertainment, cultural variety and education as much as it does food.

“Most of the time you see event spaces here, it’s people who want to have parties or they have the semi-club experience,” he said. “At Ice, we’ve had seminars, we’ve had health and wellness demonstrations, I do poetry over there, we do live music — it is truly a gumbo of culture.”

There was a time when people would have told Flemon that booking names like these was impossible.

Bringing in high-quality entertainment on a regular basis has become part of his feeling of purpose.

“My soul won’t rest just serving food and going home every day,” he said. “This infusion of culture for that part of town is truly a part of my mission and calling.”