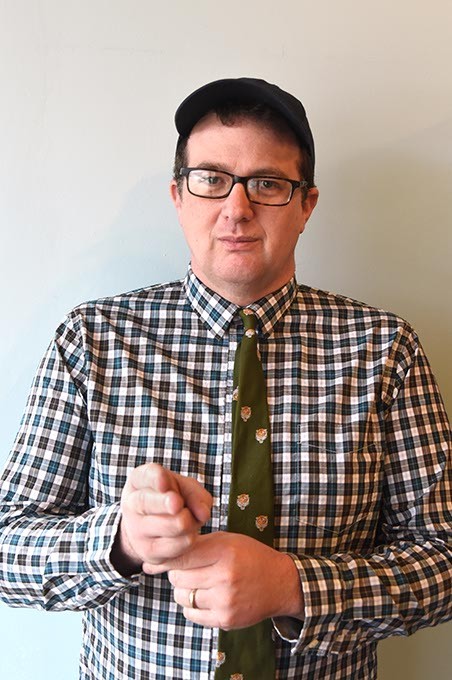 You see them there all the time, nestled between the want ads, missed connections and full-color invitations to experience the health benefits of deep-tissue Asian massage.

They’re usually buried on the back pages of newspapers or deep in Internet pop-up purgatory. They’re the ads you barely notice, much less respond to. Who, after all, would ever need to acquire a mail-order minister’s license? And why?

“Some friends of mine who were getting married hinted to me that they wanted me to officiate their ceremony,” said local business owner Steve Reynolds. “Neither were active members of a church, and neither of them wanted to go through a church to get married, so I looked quickly online at the Universal Life Church.”

The Universal Life Church’s precept is that they allow anyone to be a minister, and its philosophy is “Do only that which is right.”

“[That] tickled me,” Reynolds said.

Since then, he has officiated 11 weddings, mostly for friends.

“There was one couple I didn’t know where a wedding planner introduced us,” he said. “And the last wedding I did was right after same-sex marriage became legal in Oklahoma. I was very excited to officiate that one.”

As for the initial licensing process, Reynolds said it was a breeze.

The cost to become ordained was around $35, and he filed the papers with the Cleveland County Clerk’s office.

“They filed it online and entered it into the books, and that was it. I was official,” he said.

It really is that easy. Google “become a minister” and spend five minutes scrolling through the options available to anyone with a credit card and some time to kill. Hundreds of denominations offer the chance to “Run your own congregation! Perform wedding ceremonies and baptisms!” and “Lead others on a path to God!” — all for a nominal fee, of course.

“Just go online and click our ‘Get Ordained’ button,” promises one site. “Fill in your name and address, and flash! — you’re a minister!”

One “church” boasts of the celebrities it has ordained. (Johnny Carson, Conan O’Brian, Joan Rivers and Sir Ian McKellen are among the licensed luminaries.) Another group offers online wedding training so you can “create memories that will last a lifetime!”

They’re all slightly different but all very much the same; despite the different names, creeds and promises, most of the do-it-yourself dogma can be summed up with the mission statement of the American Fellowship Church: “Men and women who are not able or don’t wish to become ordained through traditional paths such as seminary study will find our path to ordination a real alternative, and an easy one to follow.”

However, for those who followed the more traditional path into the ministry, the same ordination some websites claim to provide is the biggest difference between people who commit to a life of faith and those who send $29.95 to the Universal Church of the Sacred Taco Platter.

“Ordaining is really the process by which most churches confer authority on you to minister,” said Greg Horton, who was ordained in 1997. (Horton also is a contributing reporter for Oklahoma Gazette.)

Horton, who now teaches at Oklahoma City University, Oklahoma City Community College and Oklahoma State University-Oklahoma City, said the rigorous process of becoming traditionally ordained is what separates the shepherd from the shyster.

Ordained while working toward his undergraduate degree, Horton studied and worked within the context of a church for a couple of years. After that, the church makes a decision about your readiness to minister. All in all, it took approximately five years for him to be ordained.

Though he no longer ministers, he feels like those in need of guidance should be discerning when they’re searching for spiritual counsel.

“This idea of ‘quickie certification,’ that’s fine,” Horton said. “If there’s money to be made, you can be sure that somebody will do it ... but if you’re skipping ordination to get certified to pastor a congregation of people, that is a tremendous responsibility.”

Jay Kelly, ordained by the First Church of God in 1998, spent a total of six years studying to become a pastor — four years of undergraduate studies, majoring in pastoral ministries, and then a master’s degree in divinity.

“It’s years of study of the Bible, theology and practical administration of preaching, and only then do you become a licensed minister,” Kelly said. “And after graduation, you had to have at least two years serving in a church before you could become ordained.”

All that schooling to acquire something that he could’ve purchased online in five minutes? Some might argue that it devalues the profession or at least raises some serious philosophical questions about the validity, the sanctity, of becoming a pastor at all.

“What I did was about skill and heart and knowledge,” Kelly said. “Just because someone has a piece of paper doesn’t make them an expert. I don’t think real ministers are threatened by people with online licenses any more than a graphic designer would be threatened by someone who just bought Photoshop.”