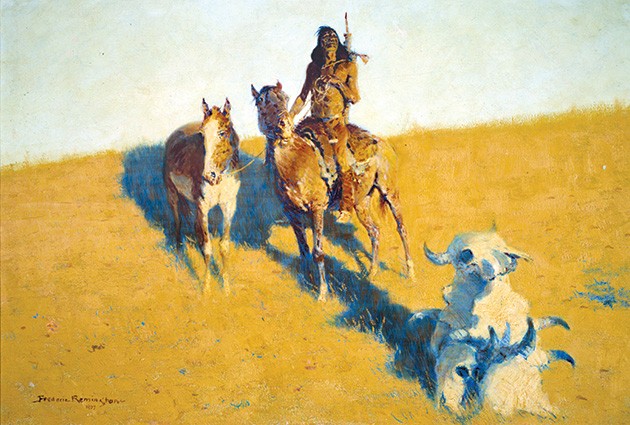 National Cowboy & Western Heritage Museum’s Ancient. Massive. Wild. — The Bison Exhibit tells the story of the bison in a 7,000 square-foot exhibit that chronicles both the animal’s near-extinction and its recovery.

“We talk about conservation — why is it important to exist in a symbiotic world?” said Eric Singleton, curator of ethnology at National Cowboy & Western Heritage Museum. “Once you overpopulate or once you destroy a certain creature, you don’t understand, like walking on a razor’s edge, how fine-tuned our environment is. When you disrupt one thing, it can have pretty significant ramifications, so that’s a point of discussion in the exhibition.”

The bison exhibit is an expansion of a National Buffalo Foundation exhibit, which updated a traveling exhibit by National Endowment for the Humanities that toured from 2010 to 2015. Singleton said the museum’s expansion of its bison content was essential to its education efforts.

“What we saw was a bigger opportunity to enhance that exhibition,” Singleton said. “The bison is an American icon and a staple of our community and the American West, so we added a very significant and large art component to this as well as a children’s gallery and educational suite. And then we partnered with the Oklahoma City Thunder to incorporate Rumble into the exhibition as mascot and icon for our local community. So it has a lot of depth to it.”

“This is a show that is about bison, not necessarily people,” Singleton said.

“The destruction of the bison didn’t just impact the Native people. It impacted the Great Plains.” — Eric Singleton tweet this

“I think 95 percent of the rest of the show comes from our own collection,” he said. “We started diving into the collection and started saying, ‘What stories are we going to tell?’”

Those stories are a fully integrated part of the American West, according to museum president and CEO Natalie Shirley.

“No creature more thoroughly embodies the West than the American bison,” Shirley said in a news release about the exhibition.

It showcases that embodiment in many forms.

“It’s talking about how much the bison and buffalo impacted the United States,” Singleton said, noting that Native Americans and those who came from Europe and other lands relied on the bison as a food source and source of supplies and shelter.

“There is a big headline that just talks about the destruction of the bison,” Singleton said. “[The decline] happened so quickly that you have the loss of millions upon millions of bison in the late 1800s, which is a really sad tale.”

The bison’s fate was nearly sealed permanently by the desire of many in power to rid the plains of the animal, which they thought would force Native Americans onto reservations. An 1873 economic depression did even more to drive up the mortality rate of bison.

“A lot of that is wrapped up in the government’s Indian policy and how the government, point-blank, said, ‘The faster we get rid of the bison, the sooner we’ll tie off the Native American problem,’ is how they phrased it,” Singleton said. “So it’s really rooted to commercialism, economics, but also just the attempt to destroy Native people.”

“That story is told. We don’t shy away from it, but we also talk … conservation efforts and attempts to bring the bison back,” he said.

Some people at the time pointed out the potential problems with killing off bison in such large numbers.

“There were people at the time, even in the 1880s, saying, ‘This is a bad thing. This is not good,’” Singleton said. “But as we all know, once the government and the population gets running, it’s just hard to stop that. But there were conservation efforts back in the day.”

In 1894, the first federal legislation was enacted protecting the bison. Both conservation groups and private ranchers have worked since then to increase the number of bison. There are now approximately 500,000 bison in North America. In 2016, President Barack Obama signed the National Bison Legacy Act, making the American bison the national mammal. 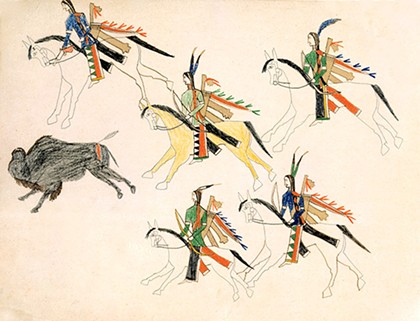 “A lot of it is understanding that we live in a symbiotic relationship with everything around us,” Singleton said. “The destruction of the bison didn’t just impact the Native people. It impacted the Great Plains. You see the invasiveness of new grasses; the bison had basically tempered that and kept certain aspects of the environment in check. That’s why the Great Plains were the Great Plains.”

One of the most famous bison, albeit an anthropomorphic one, is Oklahoma City Thunder’s mascot, Rumble. The museum and the sports organization were able to build a partnership to benefit the bison exhibit. Items celebrating Oklahoma City Thunder and Rumble the Bison, including a Thunder drum, T-shirt cannon and a wall-sized comic book titled The Story of Rumble, are on display. Singleton said the Thunder organization has been wonderful to work with.

“They’re so community-oriented, and they’ve been so friendly and hospitable. It’s just been great to work with them,” Singleton said. “It came about as a natural evolution of two organizations within a community. … They’ve been so gracious, it’s been unbelievable.”

Rumble appeared at the opening of the exhibition Feb. 9 and is set to visit or be part of other activities slated for the exhibition’s run. More than 40 bison-related programs are scheduled to enhance the learning opportunities in connection with the exhibition. Hands-on features include the ability to touch bison hides and feel beadwork.

“[The exhibit explores] the various themes and ways in which they’ve been incorporated as symbol and mascot and icon,” Singleton said. “So I think there’s a little something for everyone. It’s kid-friendly and it’s adult-friendly. It’s art and it’s history.”