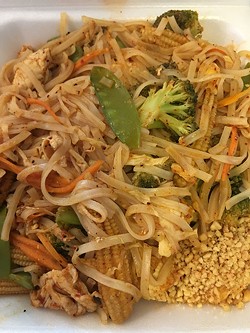 Do you ever sit down at a Thai restaurant and wonder if the amount of rice supplied to complement a curry or saucy entrée won’t be enough? Is that just me?

Drivers of electric cars sometimes suffer from “range anxiety” because they worry that the car’s charge won’t get them to their destination. I’ve got a case of “rice anxiety” from the moment I step foot into a restaurant.

For pretty much any situation in life, I’ve memorized a joke by the late comedian Mitch Hedberg that can be applicable. As I approached the entrance to Bistro 38 Thai Green Cuisine, 2903 NW 36th St., Suite 107, the Hedberg joke “Rice is great if you’re really hungry and want to eat two thousand of something” popped into my head.

I quickly discovered that mantra would come in handy when my entrée arrived inside the small, but welcoming restaurant. 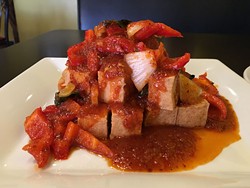 Owner Tom Pakin opened the original Bistro 38 in Edmond before selling the restaurant and opening in Oklahoma City off N. May Avenue in 2013. The ethos behind Bistro 38 that makes it different from other Thai restaurants in the OKC area lies in the “green” part of the restaurant’s name.

Pakin’s aim is to add more nutrition to the average Thai dish with extra vegetables. For example, did you know that a single red bell pepper has nearly three times as much vitamin C than an orange? In each category of entrée: stir-fries, curries, fried rice and noodle dishes, Pakin has added a vegetable-stocked version of a Thai dish.

There is the spicy green fried rice that adds red bell peppers and green beans to the dish that is normally just onions and carrots. The jungle curry adds snow peas, green beans, broccoli, mushrooms and red and green bell peppers to a base of red curry paste. Pakin said some customers trade out yellow or green curry in its place, depending on taste.

I can’t tell you how many times I’ve shied away from ordering curries in search of another dish with more nutrition. Many other Thai restaurants offer only a few slices of onion and maybe enough pieces of bell pepper to count on one hand. The juxtaposition of the coconut milk’s creamy sweetness and the complex balance of heat and savory coming from curry paste makes it one of my favorite dishes, if only the average one had more vegetables. That certainly isn’t the problem at Bistro 38.

As I sat down for my meal, one dish called to me while scanning the menu because it was something I had never seen before: volcano tofu ($10.95). Fried tofu is toped with a special four-flavor Thai chili sauce, red bell pepper, yellow onion and sweet Thai basil leaves.

Pakin said the sauce is a traditional topping for fish, but it wasn’t a top-seller on the menu. He began to look for a new vehicle for the chili sauce that exudes spicy, salty, sweet and sour.

“It’s hard to find a sauce that will go well with tofu and make it tasty,” Pakin said. “I get a lot of compliments on the volcano tofu, and it’s one of our most popular dishes.”

When the entrée arrived with chunks of crispy fried tofu topped with a healthy portion of the four-flavor sauce and lots of red bell pepper, I knew immediately that I would need more rice to soak up all of the deliciousness.

Bistro 38 offers its dishes on a four-point level of heat. I ordered both the volcano tofu and the green pad thai ($9.95, additional $1 for chicken) at a three on the four-point scale. I found that to be the right amount of heat for the tofu. It lingered on the tongue but didn’t spread around my mouth or make my eyes water and didn’t overpower the other three flavors of the sauce.

The harmony of sweet, spicy, salty and sour dance on the tongue like a Sergei Prokofiev ballet — each takes their turn to solo. The licorice essence from the Thai basil adds a nice complement to the dish.

I also ordered the green pad thai at a level three on the four-point heat scale and found it to not be as spicy as the volcano tofu. Perhaps it’s because some of the heat soaked into the rice noodles, but I found the dish to be slightly sweet with hints of umami provided by fish sauce.

Bistro 38’s green pad thai added snow peas, carrots, baby corn and broccoli to a dish that is usually just bean sprouts, onions and a few carrots for garnish at other restaurants.

The service was attentive and quick. The alert waitress was ready to refill my iced tea the moment I became too low in my battle with the heat from the volcano tofu. Bistro 38 earns points for adding extra vegetables to many Thai dishes that are often devoid of extra nutrition.

The menu is streamlined, focusing on dishes they do well and dotted with new variations on the traditional, like the volcano tofu or the King Pad Thai, which adds Japanese influence with the introduction of tempura-fried shrimp. There is no space-filler on Bistro 38’s menu; each dish aims to fill you up and provide some extra vitamins to your diet.

What works: The volcano tofu will make you rethink your opinion on the protein.