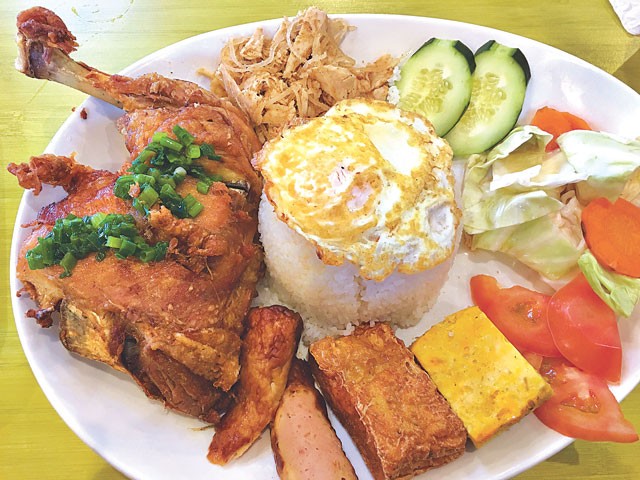 At the end of 2016, The New York Times published a column that lamented the vanishing diner culture in New York City, where there are about half as many traditional diners in 2016 as there were 20 years prior — many of them succumbed to rising rent prices and no-refill coffee outlets like Starbucks.

Even restaurants in the nation’s diner capital, New Jersey, home to about 600 roadside eateries, have begun to adapt to modern tastes by adding more worldwide menu options and amenities like free Wi-Fi, as profiled on OZY.

In Oklahoma, Boom-a-rang Diner is lifeline to many at its 30 locations, as it is one of the few restaurants open late in small towns. Oklahoma City’s Sunnyside Diner offers modern takes on diner classics. Venerable diners such as The Hungry Frog Restaurant and All American Diner in Midwest City have loyal customers, national trends be damned.

Celebrating its one-year anniversary, Bistro B, 1620 SW 89th St., is a new spin on the diner concept. At Bistro B, a customer can get a classic egg, sausage and ham breakfast, but they can also peruse a 30-page menu featuring Vietnamese and Chinese dishes.

Co-owner Hung Cao is following his family’s restaurant legacy that began in Vietnam before the fall of Saigon in 1975. Cao’s family moved to California and then Dallas, where he grew up before attending the University of Oklahoma.

After his family opened a Bistro B concept in Dallas, Cao and his business partner began to wonder if the concept could be successful in Oklahoma.

“We didn’t see another restaurant in Oklahoma offering this selection of Vietnamese and Chinese food,” Cao said.

Cao trained at the original Bistro B (described by Dallas Observer as “all kinds of awesome”), where he learned how to divide the kitchen into sections to accommodate the large menu that totals nearly 600 items.

Mainstream Vietnamese dishes like pho, vermicelli bowls and affordable banh mi ($2.99 per sandwich) are represented, but Bistro B also expands into more regional favorites like canh, a sour soup that originated in the Mekong Delta region. Fire pot and a slew of fresh seafood dishes round out the Vietnamese portion of the menu.

Cao is proud of the fact that everything in the store is fresh and natural, and he noted that beef bones are cooked for 18 hours to make the broth for pho. He doesn’t order farm-raised seafood and only gets shrimp from Louisiana.

Other portions of the menu include congee, rice porridge and a variety of simmered meats and vegetables in a caramel sauce. It takes longer to look through the entire menu than it does for your food to arrive. 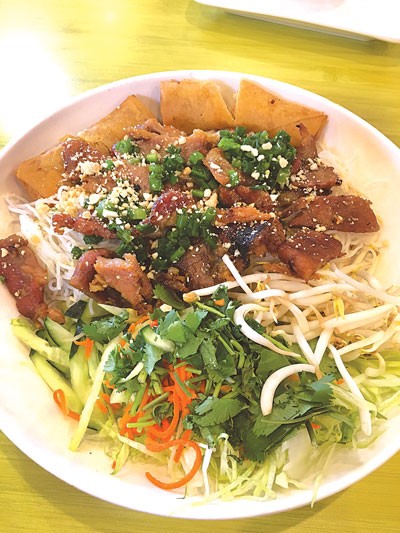 I began my meal with a lunch order of bún th?t n??ng, a cold vermicelli bowl topped with grilled pork, lettuce, bean sprouts, cilantro, carrots and cucumber. The lunch combination ($7.99) includes the choice of egg roll and egg drop soup or two egg rolls. My selection of an egg roll and soup arrived only a few minutes after placing my order.

I’m so used to receiving a formerly frozen egg roll as a starter that eating one freshly prepared was a treat. Many times, with a mass produced egg roll, it is difficult to distinguish individual components of the filling, but with Bistro B’s, the ground pork and notes of pepper make you appreciate the work they put into a small item.

I was even more pleased when I remembered that my awaiting order of vermicelli included two more egg rolls. When the dish arrived, I went ahead and asked for two to-go boxes. I was not expecting to receive a bowl much larger than my head.

Cool and refreshing, the bún th?t n??ng was exactly what I wanted after a long holiday season of heavy meals. It’s one of my favorite salads, one that is enhanced with the addition of fresh egg rolls.

Early on in Bistro B’s menu is a two-page spread of rice combination plates that feature Vietnamese sides like bi, shredded pork with skin, and ch? l?a, a traditional sausage that is pounded into a paste before being formed.

The plate also has fried shrimp tofu loaf and an egg loaf in addition to rice served with a fried egg and fresh vegetables: tomato, cabbage and carrot. I ordered the No. 69 rice combination plate that includes Chinese five-spice (cinnamon, cloves, fennel, star anise and Szechwan peppercorns) chicken ($10.99).

My favorite of the sides was the shrimp-and-tofu loaf. The ingredients are pureed into a paste, steamed into a square shape and then deep-fried. The bi was a little on the dry side, but it is unique, and the ch? l?a was good, but I didn’t enjoy the texture and it was a little sweet for my taste.

The chicken was tasty, and the entire quarter provided a few bites at lunch and served as dinner later that night. It was a little unevenly cooked — too dry in the portion where the thigh and leg meet — but the spice blend was fresh and subtly complex.

Since I left Bistro B, I can only think about the menu items that I haven’t tried, which includes a wacky and exciting list of bubble tea combinations like durian mung bean, kiwi pineapple coconut and avocado peanut. I can’t wait to return and explore more dishes. Bistro B shows that quality and fresh ingredients have a place, even in a 30-page diner-style menu.

Bistro B is open 8 a.m.-10 p.m. seven days a week, and food can be ordered through its app or online at bistrobokc.com.

Print headline: Diner reinvention; Bistro B shows that fresh ingredients don’t have to take a backseat in an expansive menu.

What works: Fresh ingredients shine in everything from in-house egg rolls to its vermicelli bowl.

What needs work: Some sides were dry.

Tip: Don’t get overwhelmed by the 30-page menu.