Black Mass and The Consumption of Mary set for Aug. 15 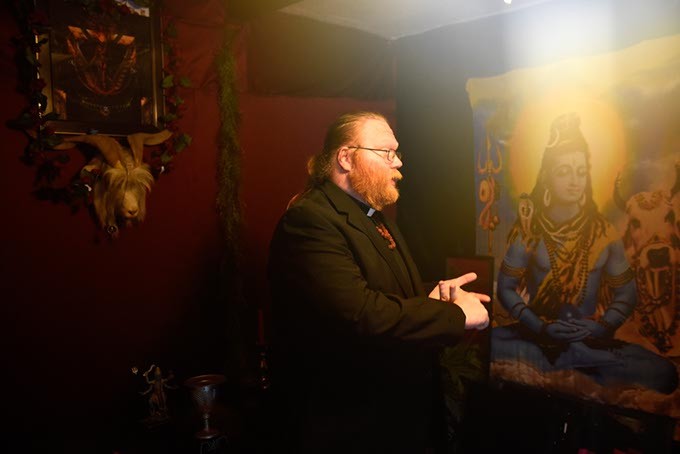 In a Satanic ritual planned for public view in August at Civic Center Music Hall, sulfur, menstrual blood and the ashes of blasphemed and burned Quran pages will be used to “corrupt” a plaster statue of the Virgin Mary.

The ceremony, known as The Consumption of Mary, is part of a ticketed black Mass hosted by Oklahoma City’s satanic Church of Ahriman Aug. 15 at Civic Center Music Hall, 201 N. Walker Ave. A black Mass is a dark parody, or inversion, of a traditional Roman Catholic Church religious service.

Church of Ahriman religious leader Dastur Adam Daniels has drawn local and national enmity for his organization’s public ceremonies and demonstrations. Archbishop Paul Coakley of the Archdiocese of Oklahoma City issued a media statement calling the group’s 2014 black Mass “a satanic inversion and distortion of the most sacred beliefs not only of Catholics, but of all Christians.”

Daniels said this year’s celebrations include The Consumption of Mary as a way to illustrate black magic and his church’s teachings and distinguish them from atheistic Satanism. He also wishes to dispel misconceptions others generally believe about the Church of Ahriman.

According to the ritual, the corrupted Mary statue is placed into the center of a Solomonic triangle, which “entraps” her. Celebrants dance counter-clockwise around the statue before a spirit severs the statue’s head, unleashing a hellmouth, or opening to hell.

Inside the statue is an actual pig’s heart, Daniels said. After the statue has been smashed, a  priestess pulls the heart out of the rubble and eats it, thus “consuming” Mary and ending the ritual.

“You’re basically going to have three rituals going on at the same time,” Daniels said. “We’re trying to show people how chaotic we are in nature and how chaotic our religion is. It’s all based on chaos.”

The federal government recognizes The Church of Ahriman as a legitimate religious organization, Daniels said. Therefore, while considered offensive by many Christians and others, its practices are protected by the U.S. Constitution’s First Amendment, which guarantees the right to the free exercise of religion.

Daniels said his church’s practices draw from the occult, Zoroastrianism and elements of Eastern theologies such as Tantrism and Hinduism. Daniels said some satanic magic and rituals traditionally call for animal sacrifices and eating human flesh, but his church finds alternatives. For example, his congregation uses human menstrual fluid instead of animal blood.

“I just want people to understand that there is no danger in coming to our show,” Daniels said. “It’s public, there are going to be police officers there, it is fully protected. Everyone is going to be safe, and it is an opportunity to learn.”

Daniels extended an open invitation for any religious leader in the city to attend the ceremony free of charge. He added that the black Mass is not a time for church members to judge or personally attack anyone who attends, but to demonstrate who they are and what they believe.

Daniels began studying the occult in 2001. The Church of Ahriman has had several disputes with the Archdiocese of Oklahoma City and the Catholic Church in the last several years, some of them — like 2014’s black Mass — high-profile.

Daniels claims their perceived feud is a fight launched by the Catholic Church in an attempt to infringe upon his religious liberties by blocking his ceremonies and rituals.

“They’re the one who started this fight; I’m just bringing it to them,” he said.

“If someone had come to them to rent the Civic Center to stage a burning of the Quran or to hold an event that was blatantly and clearly anti-Semitic, I think they might find a way to prevent it,” Coakley told Fox News in 2014.

Daniels said while the two faiths have differing goals and values, both could theoretically live in mutual peace.

“If they want to issue a full-blown apology, if they want to say they’re sorry and they’re going to leave us the fuck alone, then we’ll leave them alone,” he said. “But I don’t think that’s ever going to happen.”

Church of Ahriman members said its teachings offer them true enlightenment in a city and state caught in a Christian bubble. Daniels said these practices helped him find a fulfillment that had eluded him most of his life.

Coakley and the Archdiocese of Oklahoma City did not respond to Gazette requests for comment.

Black Mass and The Consumption of Mary by Jai Kali Maa