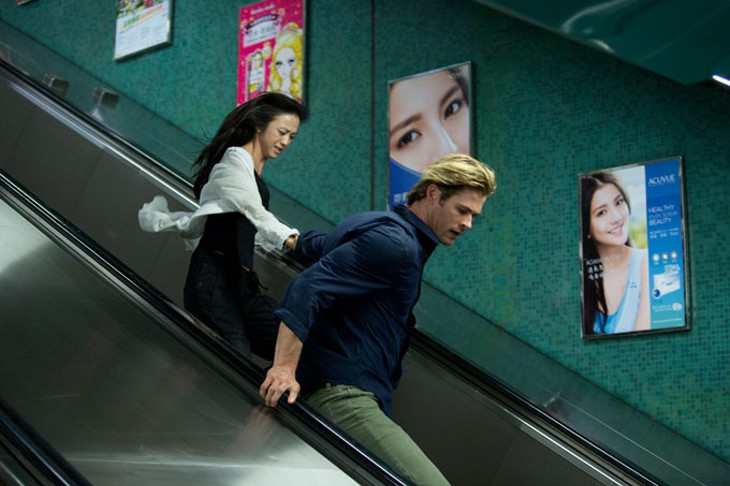 Despite a subject matter that has become almost cliché in the past year, the film is an exception for Mann, as it fails to live up to a momentous expectation and allows the piece’s fiction to overshadow its brief glimpse of reality.

After a nuclear meltdown in China and an attack upon the American stock exchange, investigative units from both nations resolve to work together to terminate the digital threats. With a series of conversations held mostly off-screen, Chen Dawai (Leehom Wang, My Lucky Star, Beginning of the Great Revival) determines a cybercrime network, or blackhat, is likely responsible for both attacks. Unable to garner traction through sanctioned means of cyber sleuthing, Dawai seeks the aid of Hathaway, a furloughed Canadian convict. With understandable hesitance, the newly formed coalition hunts for minute traces of the cyber terrorist. Gradually, the film’s scope narrows as the chase morphs into a battle between Hathaway and the blackhat.

Early shots in Blackhat entice viewers with an implication of socioeconomic consequences and what caused them. For example, opening frames examine the globe, slowly illuminating the light of technology and the potential vulnerability of massive networks. Later, vast cityscapes are examined, with specific attention drawn to traffic lights, vehicles and terminals that service and coordinate most of society.

Shortly thereafter, there’s a tracking shot across a motherboard, that which trails circuits and likens heatsinks and transistors to skyscrapers. With haste, Blackhat presents the unpleasant closeness of these two worlds as malicious data (a fast-traveling tracking beacon) makes its way to a pivotal turbine, spurring the China meltdown.

Past this act, unfortunately, the movie loses much of its intrigue. Feeling much like an extended pilot for a crime television series, a relatively capable cast and an even more capable director-writer cannot prevent the work from derailing into a stereotypical crime thriller. There is a genuine attempt to examine a form of crime that — unlike those detailed in Mann’s previous films — isn’t quickly or easily understood. Discussions between Hathaway, Dawai and the coalition spearheaded by Agent Carol Barrett (Viola Davis of TV’s How to Get Away with Murder) shed light on a few ins and outs of cyber crime.

As quickly as a genuine dissection emerges, so too does it abruptly end; high-octane chase scenes (and later gunfights) diminish social commentary until the film barely resembles its original premise.

That said, Blackhat’s choreography is to be commended, as a particular scene in South America harkens back to the impeccable editing of films like Paul Greengrass’ The Bourne Ultimatum or John Woo’s Hard Boiled.

Abandoning its exploration of large-scale cyber crime, the film’s action is invigorating yet troubling. Blackhat’s agents are steeped in genericism.

Here, a confusing theme and fluctuating focus prohibits Mann’s work from finding solid ground. Hathaway and the antagonist lack the composition and dynamics to make their rivalry worth following.

Considering recent cyber attacks upon Sony and pressing fears of security breaches, it would be reasonable to assume that this film could be a bit more educational or even more altruistic. Conversely, it could have allowed the fiction to overtake reality completely, in which stylization would have provided a more compelling story. Blackhat has trouble doing either.