Capital Gazette reporter and Oklahoma native Chase Cook reflects upon the day five of his colleagues were killed by a mass shooter in Annapolis, Maryland. 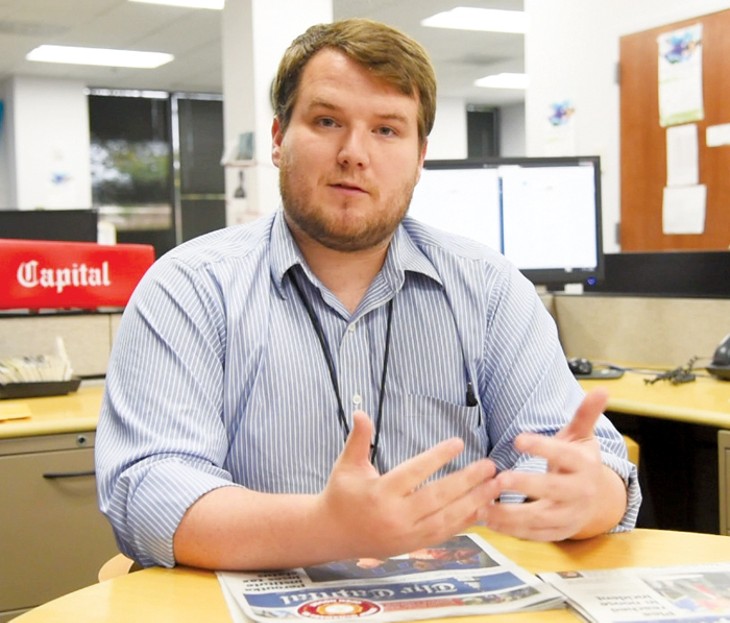 Chase Cook admits to being your average 31-year-old American man. He went to college, fell in love, followed his career and still manages to play video games on his time off. However, unlike a typical American guy, Cook carries with him a heavy burden: the loss of five of his friends and coworkers to a lone shooter who stormed into the Capital Gazette newsroom where Cook works in Annapolis, Maryland, on June 28 with a shotgun in hand.

“I heard a woman scream,” Capital Gazette staff writer Phil Davis later told Cook. “The shots were getting closer as [the shooter] was walking … to the back door and shooting people on the way. I knew someone was killed or very hurt. There were shots after he reloaded. He reloaded the shells individually. I stayed under my desk, hoping he didn’t hear me.”

Capital Gazette assistant editor Rob Hiaasen had given Cook the day off since he had just wrapped up working 32 hours in three days to report on primary elections.

Hiaasen called Cook to talk about a headline for one of his stories around 10 a.m.

When he hung up the phone, Cook continued playing his video game, soaking in some much-needed time off.

A little before 3:30 p.m., Capital Gazette’s editor-in-chief called Cook and told him there had been a shooting inside the newsroom.

“Like inside the building?” Cook asked, trying to wrap his head around the concept.

“A mass shooting,” he said in recollection, “is like a car accident. You don’t think it’s ever going to happen to you just like you don’t think you’ll ever get run over.”

Upon hearing the news, Cook threw his work clothes on and headed to an office that had moments earlier been turned into a warzone. He parked at the mall across the street with a colleague, and the two began talking to police, reaching out to sources, live-tweeting and writing a story that would appear in the Capital Gazette the next day.

Cook said he cried before collecting himself. He did that on and off from the time he arrived in the parking lot to when he finally arrived back home around 10 p.m. that night.

Somewhere in that six and a half hours, Cook wrote the tweet heard round the world: “I can tell you this: we are putting out a damn paper tomorrow.”

Journalists and journalism supporters rushed in to Cook’s aide on social media.

“All of us in Baltimore are thinking about you and the entire Capital Gazette family. You are showing us the way under the most difficult circumstances,” Baltimore broadcast reporter Ron Matz said.

“A mass shooting is like a car accident. You don’t think it’s ever going to happen to you just like you don’t think you’ll ever get run over.” — Chase Cook tweet this

Former director of information and development for The Oklahoman Joe Hight tweeted his condolences.

“Chase,” Hight said on Twitter, “I am thinking of you and your fellow staff members on this tragic day. You and the @capgaznews staff are inspiring us with your determination and spirit. Please accept my sincere condolences.”

The Oklahoma City Thunder and local reporters from the Sooner State, where life began for Cook, also tweeted their condolences and offered help.

While the Capital Gazette accepted the help of reporters from other papers in the immediate aftermath of the shootings, Cook said he declined taking time off.

Reporting, he said, served as therapy in the days and weeks that followed. He continued working so he wouldn’t slip into the dark abyss of depression but also because he felt that if he stopped reporting, the shooter would achieve what he set out to do in the first place.

The suspected shooter, Jarrod Ramos, had a grudge with Capitol Gazette that started around 2011 when the paper published a story relating to Ramos’ alleged harassment of a high school acquaintance. Ramos filed a defamation lawsuit against the Capital Gazette that a judge later dismissed.

In the following years, Ramos was rumored to have sent threatening letters to staff members at the paper.

Whatever happened, Cook said, it was before he began working there in 2014.

True to his journalistic roots, Cook is hesitant to make a political statement regarding mass shootings.

“I grew up in Oklahoma, and I’ve shot a gun before,” he said. “I don’t mind guns. Had I been there that day and had a gun on me, I don’t know what I would have done. How can anyone say for sure? I don’t know what the solution is, but if I was a politician, I would absolutely be working on finding a solution. If a politician’s job is to protect life and liberty, then certainly mass shootings are a threat to that. It’s their job to find a solution.”

Cook said that while President Donald Trump’s fake news rhetoric certainly doesn’t help lend respect to the profession, past presidents and current government officials are not fans of the media either.

“President Obama wasn’t a friend of the press either,” Cook said. “He just had better bedside manners when it came to antagonizing the press.”

Instead of taking insults personally, Cook said, he sees them as affirmation that he’s reporting well.

“If people are happy with what I’m doing, then I’m not doing a good enough job,” he said.

It’s the kind of conversation, Cook said, that he would have liked to have with Hiaasen.

Five people were killed in June 28 attack on Capital Gazette. Hiaasen, 59, was an assistant editor; Wendi Winters, 65, was a community correspondent; Gerald Fischman, 61, was the editorial page editor; John McNamara, 56 was a staff sports reporter; and Rebecca Smith, 34, was a sales assistant who had worked for the Capital Gazette for less than a year.

A day hasn’t passed yet, Cook said, that he hasn’t thought of them.

The remaining full-time staffers at the newspaper now work out of a new building in downtown Annapolis.

“It’s the nature of our job to piss people off,” Cook said. “This is not a business where you make a lot of friends. I think as an industry, we need to be open to criticism.”

Criticism, Cook said, he can take. A bad tweet, a bad review, a bad online comment are all understandable. But he might never understand blasting into a newsroom and killing strangers.

Cook continues to report for Capital Gazette full-time and is working on reporting the latest details of Ramos’ sentencing. Recently, Ramos’ attorney has stated an intention for his client to plead insanity.