What started as a small, middle-of-the-week gathering of taco trucks in a Historic Capitol Hill vacant lot has become a full-fledged block party to kick off the weekend.

The sixth year of Fiesta Friday organized by Calle Dos Cinco, which promotes economic development in the historic district, is back in action starting 7 p.m. July 27.

Related Hill of sweets: After working around the city, baker Sara Miller opens La Confection in her Capitol Hill neighborhood.

The event is now held on S. Harvey Avenue between SW 24th and SW 25th streets as a new brightly colored mural by artist Sergio Ramirez overlooks the event.

“We outgrew the vacant lot,” said Miriam Ortega, promotions coordinator for Calle Dos Cinco. “We’re able to activate Harvey by closing it off between 25th and 24th streets. It’s a beautiful night; we bring out the string lights, and having the mural there adds so much color and place-making.” 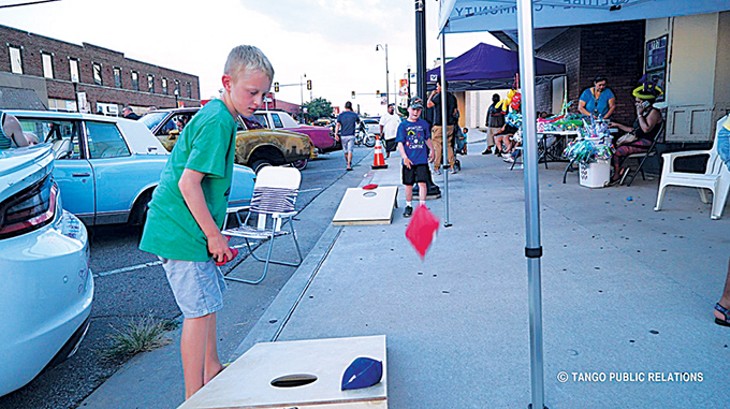 For the first time, this year’s Fiesta Fridays are organized around separate themes. The June celebration gathered fans around the FIFA World Cup. The July 27 event is designed to promote higher education around a Back to School theme.

Ortega said local universities will have booths set up to provide information about attending college and receiving scholarships.

The Oklahoma City Dodgers and Oklahoma City Thunder representatives will be in attendance. The Dodgers will bring inflatable games, and the Thunder will bring the OG&E Thunder Bolt truck that is designed to provide an interactive experience.

There will also be a variety of food vendors and a classic automotive show with at least 20 vintage cars.

To further enhance the Back to School theme, Calle Dos Cinco has invited the Xi Beta Chapter of Sigma Lambda Gamma from the University of Oklahoma to lead a strolling competition.

Ortega said that they will take applications for dance teams until July 20 and they have six teams already scheduled to participate for the prize of $150 and $75 second-place finish.

"We’re doing this so that local students will be encouraged to pursue higher education."— Miriam Ortega tweet this

The competition will be two rounds: old and new. In the first round, contestants dance to a throwback song wearing retro outfits and pick more contemporary music and styles for the second, with each performance ranging from one to two minutes.

By showcasing strolling and highlighting the charitable efforts by each Greek organization, Ortega said they hope to expose the community to positive aspects of Greek life that go beyond the hard-partying stereotypes portrayed in the media.

“We’ve all seen the movies, but I know that a lot of [pre-college] students may not know what a fraternity or sorority is, but we’re also doing it for parents because a lot of them, especially in the Hispanic community, don’t understand that purpose of the organization,” Ortega said. “We want kids to make connections and be able to walk up and say hello once they get to college.” 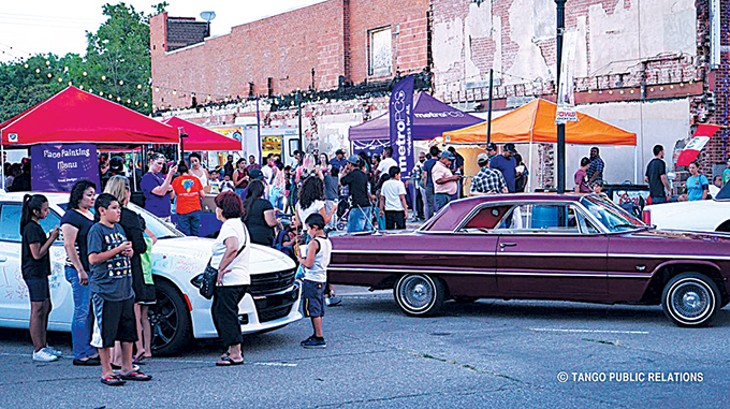 Ortega said the themed event in June led to increased turnout and helped target a new demographic that hadn’t attended Fiesta Friday in the past. She said the organization will continue with themed events in the coming years.

The Aug. 24 Fiesta Friday event will be organized around a Summer Lovin’ theme as a nod to the musical Grease. Ortega said they’re encouraging guests to dust off a leather jacket or pull a poodle skirt out of the closet.

Capitol Hill predates Oklahoma statehood and was once slated to become the Capitol of the state. It was a center for economic activity with big department stores like J.C. Penney until the introduction of indoor shopping malls in the 1970s drew retailers from Main Street.

Capitol Hill Main Street was established in 1997 to promote economic development and has garnered $14.8 million in public and private re-investment into the district.