Record Store Day is going to be a lot different this year.

Guestroom Records, 3701 N. Western Ave., is teaming up with Mosaic and Cock-O-The-Walk to turn the day into a block party.

From 9 a.m. to noon on June 12, the record store will be doing 15-minute appointments so that people may shop safely. A $10 deposit will be required to save a spot.

“We’ll have hundreds of new, exclusive releases. We’re gonna be releasing a lot of kind of high-end used records we’ve been squirreling away too,” Guestroom owner Justin Sowers said.

“Once the appointments are over at noon, give or take, we’re going to open. We’re not going to pack it out. We’re going to limit it to probably 25 people in the store, maybe 20. We’re still kind of feeling out what feels comfortable. We’re gonna take all those high-end records, whatever didn’t sell during the appointments, I’m going to take some Record Store Day stuff out there and we’ll take it outside, sidewalk sale style, out in the back part for the show, so that should be pretty fun.”

Sowers noted that all of Guestroom’s employees are also vaccinated.

“There’s two items of Flaming Lips interest for Record Store Day. There’s a Flaming Lips [The] Soft Bulletin companion double-LP that’s coming out. It’s limited. It’s like b-sides, demos, comp tracks, some alternate takes, remixes, that kind of stuff from The Soft Bulletin era, which is exciting. Barring shipping delays, all of our copies should be signed by Wayne [Coyne],” he said.

“We don’t make much margin on that because I don’t care about selling the printer. I want to sell the ink, so I want you to have something that sounds good, that you like, that looks good,” Sowers said.

Nicholas Ley will be there, performing under two different monikers. First, his band Colourmusic will be playing a set, including a number of songs from their new record.

“We’re gonna play some stuff off of that, but we’re also gonna play some songs that we haven’t gotten to play before and play older songs in weird ways. We’re doing it as a really free, experimental kind of electronic version of the set. When we usually play it, we’re kind of tied to certain instruments and we’re changing that up,” Ley said.

After that, as part of duo Brothers Griin, he will be performing a DJ set until the party peters out.

​”Thank Goodness Hell is Easy To Get Into,” the new Colourmusic record, is released by Resonant Cult Records. Resonant Cultivation is the growing arm of Mosaic.

“They just opened Mosaic+ and they’re like, ‘How do we do this in a cool way?”’ Ley said. “Well, for one thing, you guys are right next to Guestroom, so the music and the culture part about it has to be kind of at the forefront and if we can get people there, even better because Guestroom is fantastic, but only so many people can fit in, especially on Record Store Day.”

There is a new back parking lot to the strip. When he saw it, Ley instantly knew that would be the spot to set up to perform. 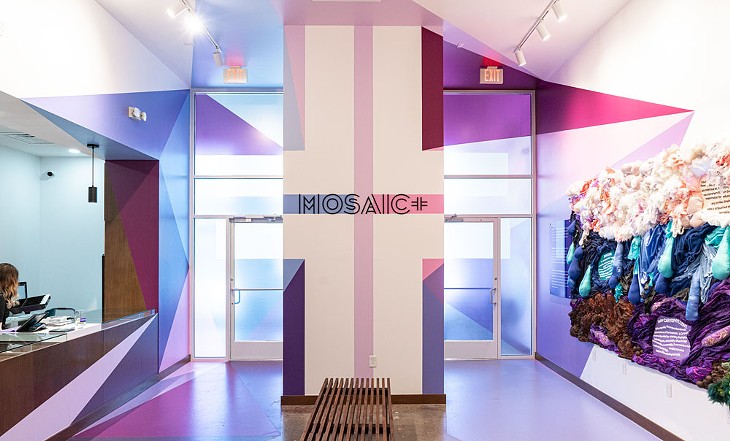 “We don’t need a stage. We’re just gonna do it like a block party type thing and people can hang out … We can bridge everything with a good time after a lot of us have been completely isolated and separated for a while. I think most people are vaccinated. Some people aren’t, but we’re still going to be doing it in a safe way so everybody can kind of engage at their own discretion. I think it’ll be a good time. It’s gonna be easy to park and hang out and get a beer. There’s some free food. We’ve got free posters, we’ve got some T-shirts we’re gonna give out I mean, just all kinds of cool stuff, just to kind of be out and celebrate being alive and being together again,” Ley said.

Cock-O-The-Walk has been licensed to sell beer in the parking lot during the event and food will be provided throughout the event from The Wedge and The Drum Room, both just a little bit farther north up N. Western Avenue.

“Guestroom is an anchor in Oklahoma City and we’re excited to bring artists in through Mosaic with arts and music and events like this. So this is the first one and we’re really excited,” Mosaic owner Reid Colley said.

“We’ve got chicken and wings from The Drum Room and 15 pizzas from The Wedge. If those fly, all I have to do is call The Wedge back and make an order and they can bring more. Everything. Posters, shirts, food. Everything is free. Mosaic is paying for it all. This is the shit that we can do. This is fun. This gets people back together.”

There will be 200 posters for the event handed out for Record Store Day, as well as a T-shirt.

“We’re already planning the one for July 17 and that’s the cool thing. Cock-O-The-Walk and all the neighbors are so amped about it because you know with Cock-O-The-Walk you’ve got a certain group that won’t go in there because it’s smoking but for them to be able to have events and be able to do things too is going to really add a lot to the block for sure,” Colley said.

Record Store Day begins with appointments at Guestroom and coffee and donuts provided by Mosaic at 10 a.m. and continues until at least 5 p.m. with Brothers Griin on the decks.