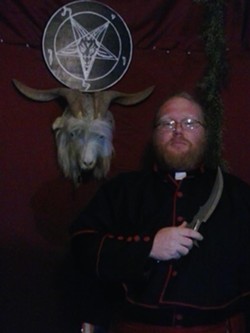 In a 13 minute rant posted on YouTube in June, Adam Daniels, the person behind the satanic black mass event that has drawn opposition from religious and political leaders, says he is ready to defend his cause with violence if necessary.

“I say bring the violence,” Daniels said as he paces in a black robe. “If I have to decapitate in order to defend myself and my family, my property, I will do so without hesitation. If they want to take it to that level, congratulations, I will take it right there with you.”

Daniels has rented a room at the Oklahoma City-owned Civic Center Music Hall for Sept. 21 in order to perform a black mass, which is described as a satanic ritual meant to mock the Catholic church.

Church leaders have complained to city hall about the event, but city officials say it would violate the U.S. Constitution to deny access to the facility due to a difference of religious opinion.

Criticism from Oklahoma City Archbishop Paul Coakley and Gov. May Fallin have put a spotlight on Daniels, who appears to welcome the attention.

“This black mass is a disgusting mockery of the Catholic faith, and it should be equally repellent to Catholics and non-Catholics alike,” Fallin said in a statement. “It may be protected by the First Amendment, but that doesn't mean we can't condemn it in the strongest terms possible for the moral outrage which it is.”

In an interview with Oklahoma Gazette last month, Daniels said he viewed the controversy as a positive.

“It’s definitely a positive for us,” Daniels said. “We continue to have an issue with Christians trying to shut us down, and this highlights that.”

In the YouTube video posted on his blog, Daniels argues for his right to practice his religion and says he is willing to be a martyr for his cause. While he cites violence as a solution to his difference with the Christian church, he ends the video with a threat to file a lawsuit if he is not allowed to hold the black mass next month.

“Be careful how you come at me,” Daniels said. “I am [lawsuit] happy.”