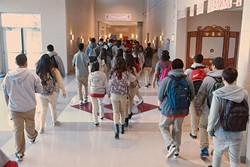 Announced personnel changes by Oklahoma City Public Schools on Monday created some concern that fine arts programs, like high school orchestra, were on the chopping block. But district staff said the changes will instead help ensure the retention of those programs.

The district issued a press release Monday stating three director positions would be eliminated and that seven Instructional Leadership Directors would be created to manage principals and improve instructional leadership.

“In my 100 Day Report, I was up-front about the lack of curriculum alignment or support for principals and teachers from Central Office; this includes how we engage our 13 charter school partners,” superintendent Robert Neu said in a statement. “This new structure allows OKCPS to focus on developing principals’ instructional leadership skills in all buildings, to provide our teachers with the support needed to improve instruction.”

A quote by associate superintendent Aurora Lora led some news outlets to believe the announced changes would result in the end of high school orchestra. However, Lora said the changes would help ensure orchestra remains an option.

“We are placing orchestra teachers at elementary schools, but at the middle and high schools we do not have the resources for students to continue with the program after elementary school,” Lora said about the current situation. “The new structure will guarantee curriculum is aligned and that all students are offered the same opportunities academically across Oklahoma City Public Schools.”

The announcement caused some concern with parents who had told Oklahoma Gazette last week they heard rumors of pending cuts to arts or music programs. Prior to Monday's announcement, district representatives said there were no planned cuts.

Tierney Tinnin, communications director for the district, confirmed Monday that there were no planned cuts that she was aware of.