Shoulda Been Blonde releases its first full-length album and ponders its next steps. 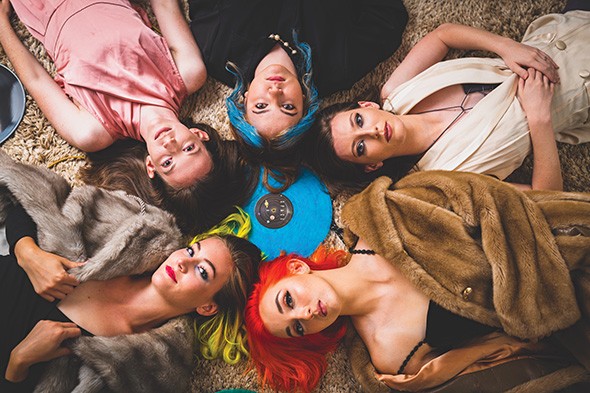 Shawnee’s Shoulda Been Blonde was named after a joke lead singer Peyton Wilson’s cousin used to make at her expense.

“We were doing a local talent show, and we needed a name,” said Wilson, a brunette often seen with her hair dyed neon blue. “We just came up with it, and it stuck. I wrote a song to go with it later.”

Wilson and sisters Mirran Grein (drums) and Brenna Furstenwerth (née Grein; bass), formed the band as a three-piece in 2012. Wilson and Furstenwerth were 13 at the time; Grein was 11. They switched instruments and roles and added guitarists Madelyn Idleman and Lauren Grein (Mirran and Brenna’s cousin) to the lineup.

“You always said that my hair didn’t match my brain, and I always said that your face was a shame,” Wilson sings on the title track from the band’s self-titled 2016 EP. “But now we get along, even though everything you said was wrong.”

Shoulda Been Blonde celebrates the release of full-length debut Worth Sept. 20 at Celebration of Life Park, 301 E. Main St., in Shawnee. Wilson said her approach to songwriting has evolved since the band began.

“I don’t think the subjects have changed, but my outlook has, definitely,” Wilson said. “I write a lot about mental health and accepting yourself or trying to fit in, and my viewpoint on those things when I was 16 whereas now when I’m 20 are different, and I write about those differences.”

"We were writing music that
kind of sounded too much alike,
and we didn’t want to be stagnant."
— Peyton Wilson tweet this

On the title track for 2018 EP More, Wilson seems to have moved past merely trading insults.

“Your words won’t change me,” she sings. “Your words don’t phase me. You won’t be my dictator.”

While previous releases felt more like collections of disparate songs, Wilson said Worth has a unifying concept.

“It’s the first body of work that we’ve done based on one idea,” Wilson said. “Worth is pretty much the common theme — finding worth in yourself, not using external factors like your peers and things to find worth, accepting yourself. I use a lot of personal experience for the songs that I write.”

“We experimented a little bit more with sound,” Wilson said. “Before, we were trying to stick more to just guitars and bass, and that was pretty much it. We were trying not to use a whole lot of synths and electronics, and we definitely used a lot more in this album, which was a lot of fun to be more creative that way. We were writing music that kind of sounded too much alike, and we didn’t want to be stagnant. We wanted to grow and branch out into other music. I’m also a big Paramore fan, and their last album After Laughter was really different, and it kind of got me listening to other things out of alternative rock, and I used a lot of that to write the album.”

Shoulda Been Blonde began life as a talent show act, but the amount of attention it has received in recent years has caused the band to consider what its next steps could be and where they might end up leading.

“For a long time, it was more just that we liked playing live and we liked making music, so that was really what we focused on,” Wilson said. “We did a lot of things in the community like playing at local restaurants, and every third Friday, they’ve got a music thing downtown that we would do just because we liked to do it. So for a while, we just wanted to do music, and I think we just kept growing. … Recently, we’re at a point where we need to decide if we want to go further or if we’re happy where we are and how we want to handle that.” 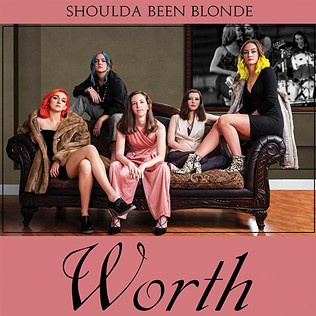 Balancing the responsibilities of young adulthood with the possibilities of a buzzworthy band is a challenge.

“It’s difficult with Lauren in school in Norman, and I’m working full-time and going to school full-time,” Wilson said. “[Idleman] is in high school. Brenna has a full-time job. It’s hard.”

Idleman said headlining 2018’s AMP Festival was the moment she began to realize the band might be moving beyond local talent shows and restaurant gigs.

“It was a way bigger stage than we’d had, and we had a really good sound system and a lot of people showed up,” Idleman said. “That was the moment where we really showed our stage presence, and we did really well. Then after the gig, we were like, ‘OK, we’re ready to do more,’ and that’s when I was like, ‘I think this could be way bigger than we are planning for it to be.’”

The conflicted lyrics of More’s “Remedies” seem to describe a similarly daunting crossroads.

“We see two different worlds, and one may be a curse,” Wilson sings. “No room for fantasies inside my small, gray earth. Hold on to your dreams, tied to the melodies. Dreams are the best remedies.”