The first Canna Grudge Showdown held on Sunday night was quite a spectacle. 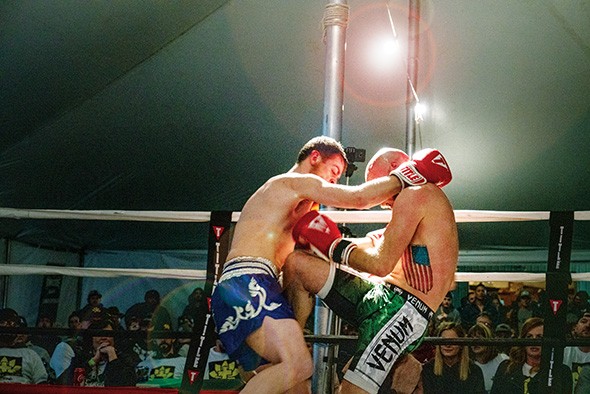 Hundreds of people descended upon Newcastle Sunday night for the first Canna Grudge Showdown, and all the fighters left intact, save for one lost tooth.

When Michael “Medic Mike” Sutterfield announced the matches last month on Facebook, the card quickly filled up. By the time the smoke cleared, 11 fights had been fought, a couple of belts had been awarded and some bad blood washed away after a few minutes inside the ring.

Mixed in with the Canna Grudge bouts was the Stand Up & Fight card, which included two regional belt contests for World Kickboxing Organisation (WKO).

The event was held on private property just south of Oklahoma City limits. Hundreds of cars veered from a long, paved driveway and lined up in the grass. Attendees who climbed the hill were met with clouds of cannabis smoke as attendees milled around a paved area between the shop that served as the locker room and the large tent that held the ring. Some stopped and loaded up on hot dogs, sodas and water before taking their seats inside the tent where hundreds of people gathered.

The first fight of the night set the tone for the rest of the evening. Two behemoths, Adrian Palmore and Whitney “Werewolf” Daniels, squared off with one another, the latter standing 6 feet 9 inches tall. The first round went smoothly as a dead silent crowd sat rapt, but a front roundhouse kick by Palmore early in the second round woke everyone up and the sound of legs clashing during a checked kick let everyone know that they were in for some exciting fights. Daniels kept tying up Palmore during the third round, staying alive for the duration of the fight, which the judges awarded to Palmore.

The second fight did not last long. At 51 seconds into the first round, Jared Rangel knocked Joseph Gibson out cold before he even knew what hit him. Gibson lay splayed out on his stomach as referee David “Thunder” Cummings called the fight. Rangel took home the lightweight regional title from WKO for his performance.

The third match was the first Canna Grudge one and showed the audience that the cannabis industry could hold its own with the other fighters on the card. Matt “Action” Jackson took Byron Harmon to task. It was the first fight of the evening to feature headgear and shin guards, but they proved to be irrelevant after an early stoppage by Cummings after Harmon took a flurry of shots to the face.

The third match showed the audience that the cannabis industry could hold its own with the other fighters on the card. tweet this

A little comic relief broke up the intensity of the card at that point, with “Ganja” Gordon Flick sparring with “Reefer” Ronnie Welchel. Both gray-bearded men took wild but meager shots at each other. Even though they both called it quits after the first one-minute round, it was the first fight to really get the crowd going. The tent erupted in wild cheers as the crowd egged both men on as they threw outlandish shots at each other, most of which barely landed, if at all.

Felix Iggata handed Johnathan Woody a defeat in the second round of the fight. Woody kept taking straight shots to the face that knocked him down twice in the first round, and Cummings called the fight after a particularly hard blast to the face during the opening of the second round.

James Brown then went head-to-head with Sunshine Baker. Brown ate multiple punches while Baker was wearing UFC headgear that protected almost all of his face, but a well-placed shot from Brown left Baker splayed onto his stomach for a technical knockout during the first round of the fight. 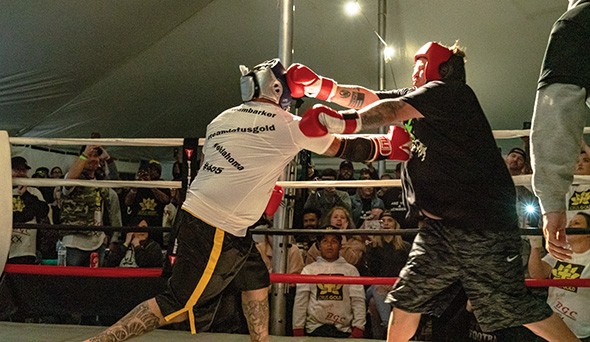 The seventh bout was the second title match of the night and the last Stand Up & Fight match, this one a showdown between Braiden Howell and Matt Guymon. The fighters were competing for the regional welterweight title and put on one hell of a show. The first round was all kicking and no boxing. The fighters then clinched during most of the second round, each putting in their fair share of knees to the body of their opponent while being tied up. Guymon pulled off a number of trips, front kicks and a throw but was not able to best Howell at the end of three rounds, setting off a tiebreaker fourth round. The punches that were missing most of the rest of the fight were thrown in the final round, as both fighters used every tool in their arsenals to try to get ahead. When all was said and done, Guymon edged out Howell in a split decision from the judges, securing the belt.

After a brief intermission, the crowd erupted when Robert Barker headed to the ring to represent Lotus Gold against Randall Pegg with The Plug 918. Barker came out swinging for the fences in the first round, putting Pegg on defense throughout, but in the second round, Pegg returned the favor with a series of wild overhand punches that battered Barker. Before the full minute of the second round had elapsed, both fighters were out of gas, running down the clock until the break. Both Pegg and Barker were exhausted throughout most of the third round, and the judges gave the win to Pegg in a split decision.

Sutterfield, one of the organizers, then jumped into the ring to take on Kody Armstrong. Sutterfield was definitely the lighter and more experienced of the two fighters, dropping his gloves and taunting Armstrong during the first round while still landing a few kicks and a couple big right hands. The second round was uneventful, characterized by big swings and big misses, but the third round heated up, with Armstrong able to keep Sutterfield at bay. Armstrong had a few inches and more than a few pounds on Sutterfield, but both were able to weather each other’s storms long enough for it to go to the judges, who gave Sutterfield the win by unanimous decision.

Shelby Dean then entered the ring for her match while Stacy Barker took the bout on, to quote announcer Larry Reed, “about 30 seconds notice.” Dean started throwing bombs as soon as the two touched gloves, but it did not take long for Barker to start timing Dean’s punches and rocking her with return swings. The two fighters ended up in the ropes during the second round before being pulled apart. Both fighters were winded during the third round, but Dean attempted a few hammerfists while Barker gave one final charge and barrage to pull off the win in a split decision.

The final fight of the night was the match between Andrew Blackshear and Derek “Hooligan Bean” Workman.  Blackshear started with a strong shot, but Workman returned the favor later in the round with a couple of good upward rights before getting the wind knocked out of him in the second round. Workman got tangled in the ropes during the third round but walked it off before taking a few shots to the midsection and ending the fight with both men throwing haymakers until the whistle blew at the end of the fight. Blackshear won by split decision but lost a tooth during the match that had previously been loosened.

All in all, the audience was treated to a series of fights that stretched more than two and a half hours and (hopefully) settled at least some of the grudges that have arisen during the first year or so of the cannabis industry in Oklahoma. As Sutterfield has said previously, this is just the beginning.

The second Canna Grudge Showdown has not been announced.