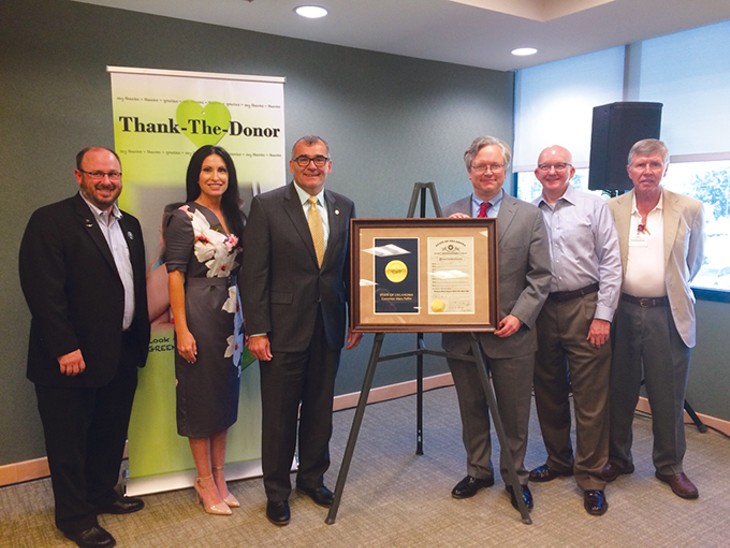 Donating blood is one of the few altruistic actions most people can do. However, a giver’s knowledge of their donation’s impact was usually removed from the equation. Earlier this year, Oklahoma Blood Institute (OBI) sought to change this.

Built in tandem with and working from many of the institute’s established record technologies, Thank the Donor is a new program allowing patients to express thanks to all involved with their care with the modern ease of using social media. This initiative is the nation’s first to allow a direct connection between donor and recipient without compromising any medical privacy laws. Thank the Donor likewise allows for digital gratitude to be spread to all parties involved with the transplant, crafting a visual representation for hospitals and volunteers to curate and maintain.

Conceived by Dr. John Armitage, CEO of OBI, the application of Thank the Donor is straightforward. Via a green, heart-shaped tag adorned with a QR code attached to every bag of blood originating from OBI, patients are encouraged to visit thankthedonor.org to begin crafting their unique thank-you note. Armitage noticed the technology has been used in commercial environments but has not been harnessed effectively for charities.

“Before, a blood center might know who is giving blood and the stories of amazing impact that process entails,” Armitage said. “Still, there was no way for an institute like us as a charity to celebrate that and make it a part of our narrative; it’s more vague and abstract. I happened across the fact you could use a barcode on a product to pull limitless information with your phone, and this flexibility with the technology opened up a concept of using a barcode of sorts on a blood unit to help break down this abstract barrier.”

Though there was an initial concern with disclosure and Health Insurance Portability and Accountability Act (HIPAA) compliance, Armitage and his team quickly realized if the program was implemented in a fashion akin to Facebook or Instagram, this concern could be alleviated with recipient’s consent to share. Armitage also knew the technology would need to be accessible; thus, OBI sought the assistance of local software developer Justin Redwine to create the module.

“This has just opened up a flood of content and a ton of emotion power that was previously hidden,” Armitage said. “With Justin’s help, we were able to also enact a bit of innovation, and now we’re establishing licensure agreements with other, neighboring blood centers. Once a facility starts to use the program and see what it does, it’s easy to see how it can help them.”

Given the required anonymity for a donor, Thank the Donor is not so much about crafting a personal relationship between two ends of the donation process. Instead, the program allows for one to illustrate gratitude open the public’s eyes to the tremendous impact of giving blood.

“It changes this process from something veiled to a visualization,” Armitage said. “For example, a 91-year-old woman may not only say thank you but also post a picture of her ability to get outside and care for her garden again because of the donation. Thank the Donor provides this emotional rush and gives the donors, volunteers and the public a sense of what we’re doing has a tremendous effect on people.”

In Armitage’s experience, Thank the Donor has empowered staff as well as patients. Without the encouragements of nursing staff, for instance, blood recipients might have little to no context as to what the green heart does and represents. The nature of Thank the Donor is not only used to forward OBI’s mission, but can be used by hospitals and other care facilities alike to echo the importance of recovery.

“The tag itself is super passive, so it needs someone to explain it and why it helps the community. The way the nurses and hospital staff have engaged in this program and the overall positive reception means they are finding the joy of healing,” Armitage said.

The aforementioned reception of Thank the Donor in turn encouraged Gov. Mary Fallin to declare Aug. 2 Thank the Donor Day across Oklahoma. Armitage feels the day promotes OBI’s mission while simultaneously encouraging more donors and blood drives. Moving forward, this event will likely spur the empowerment and continued success of blood centers throughout the state and, eventually, the nation.

Through the creation of Thank the Donor, a patent was filed for a concept known as share-thanks. Armitage said the technology is currently available for free to local charities so developers can gauge the success that such software might have in other nonprofit sectors. However, determining truly the best fit for the tool will still take some period for consideration.

In the meantime, the benefit of Thank the Donor is apparent in the industry it currently involves. Even so, Armitage feels strongly about the widespread impact it could have.

“My hope is maybe in a few years, when somebody gets a transfusion, it will become second nature to say thank you with the help of this little green heart,” he said. “The donor gives blood and the recipient provides this tangible message of gratitude; it becomes an organic part of the process. There are several people that may only give blood if it’s for a family member of if they’re paid. Yet 80 percent of the world’s population, predominantly women and children, don’t have access to safe, reliable supplies of blood. This tool could, in some way, be the lever that fixes a global crisis.”