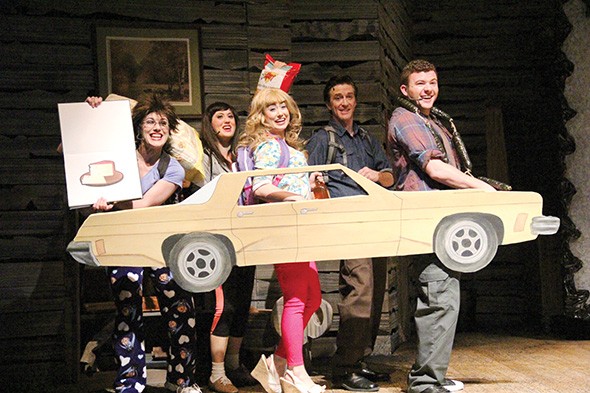 Like a corpse clawing itself out of the fruit cellar floor, Evil Dead: The Musical has been revived, and somebody will have to wipe up all the blood.

“The last time we did it was five years ago,” said director Jared Blount. “We had our stage crew, and then we had a crew that specifically came in for cleanup, so three different people that weren’t involved in the production came up and had to mop and scrub flats on the set. That was mainly because we had midnight shows, which we don’t this year, so our crew is going to be able to stay and clean up, but it takes about 30 to 45 minutes to get all that blood not visible for the next production.”

A singing, dancing stage adaptation of Sam Raimi’s cult horror-comedy trilogy of films, with book and lyrics by George Reinblatt, Evil Dead: The Musical returns Friday-Nov. 2 at The Pollard Theatre, 120 W. Harrison Ave., in Guthrie. Blount has long been a fan of the franchise, which follows unreasonably cocksure Ash Williams (played in the films by Bruce Campbell) as he attempts to put the titular zombie hordes back into the ground — a gruesome business often requiring him to violently dismember demonic versions of his departed friends and lovers.

“I think I saw Evil Dead 2 when I was maybe 11,” Blount said. “And I’ve just been hooked on Evil Dead — and really any Sam Raimi movie or TV show — ever since then. I’ve got four books signed by Bruce Campbell. In fact, our Necronomicon that we use in the show, the book of the dead, we brought to a book signing and had Bruce Campbell sign it. Everybody involved in this is a pretty big fan.”

Though popular with the cast and crew, the musical presents different challenges from a typical Pollard production.

“There’s a lot more moving pieces involved,” Blount said. “We have kind of a large-scale production at least once or twice every season, but that doesn’t necessarily involve a lot of technical elements, whereas this show specifically, we’ve got to have disembodied hands that run around, people’s body parts getting chopped off and blood spraying from various areas on stage.”

Also unlike most productions, Evil Dead includes a designated audience “splatter zone,” in the first two rows, where, according to the Pollard’s website, “a variety of non-toxic (but potentially fabric-staining) liquids will be ‘sprayed’ in your direction — representative of arterial spray, viscous gory material, and miscellaneous bodily fluids.” Fortunately, getting the blood out of the theater after every show is easier than an average crime-scene cleanup.

“Sixty percent of it is Dawn dish soap, so it kind of doesn’t necessarily stain anything,” Blount said. “You just kind of wipe it away.”

Since the theater staged the production in 2014, Blount has been wanting to bring it back.

“When we first did it, we knew we wanted to do it again, and we stored the set away,” Blount said. “I’ve been saying to our artistic director [W. Jerome Stevenson] ever since then, ‘Hey, we should bring it back,’ and I think it could be a go-to Halloween show in Guthrie. It was really just kind of a unanimous decision from everybody at the theater that I think this is probably a good time to bring it back and get all the fans used to seeing it here.”

It wasn’t a recitation of passages from the dread Necronomicon that inspired the production’s resurrection, but the untimely demise of the franchise’s most recent entry.

“The new series on Starz, Ash vs. Evil Dead, had been canceled, and I remember telling our artistic director Jerome, I said, ‘There’s not really an outlet for people to regularly see Evil Dead stuff,’” Blount said. “So I thought, ‘How perfect would it be if we brought it back, and fans of Evil Dead actually can attend and be immersed in that world again?’” 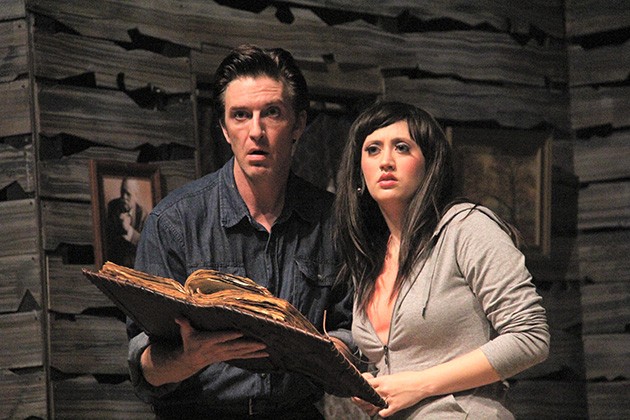 Making sure everybody is on the same page about the franchise’s twisted humor and skewed perspective is crucial for setting the right tone.

“The show is based in such a nonrealistic atmosphere, so directing the actors to do things that are completely unnatural has been kind of difficult because an actor’s normal instinct is to immerse themselves in a scene to make it seem natural, but with this show, it’s like, ‘No, you’ve got to play an archetype, and you’ve got to play it so that there’s no question what trope you’re playing,’” Blount said. “Once we all got on the same page, it took a few rehearsals but they all got it — it’s just campy as hell.”

Much of the story’s gory black comedy comes from the inversion of common B-movie clichés.

“Ash, essentially in my mind, is kind of the final girl in every other horror movie, but he kind of builds his character up to be the hero archetype, and of course, there’s the female hero, as it were, who, in this particular case, is the guy in every other horror movie that winds up dying,” Blount said. “Then we’ve got the douche-y best friend and the nerdy sister and the harbinger, the hillbilly that lives in the woods. Basically, any kind of horror movie trope that you can think of is kind of wedged into the show.”

Blount said he wanted actor Wil Rogers to play Ash because he is able to evoke elements of Campbell’s performance while bringing his own distinct energy to the part.

“One of the big ones for me was the look,” Blount said. “Ash has to have a certain look, and Wil Rogers definitely has it. And secondly, I think it was the ability to make Ash his own character while at the same time drawing a lot from Bruce Campbell and his character from the movies. But Wil has such a natural comedic timing and a very seasoned approach to the character in the show. One of the biggest reasons I asked him was he’s one of those people that just absolutely gets it, so it was pretty easy to make him the number one choice.”

Ultimately, Blount said, theatergoers familiar with the films should know what to expect from the title alone.

“The only thing different is that there is music in it,” Blount said. “The movies are really near and dear to my heart, so I think me and the cast tried as hard as possible to adhere to the films, but I think the biggest differences that the audience will notice is that they’re just up there having fun, and there’s plenty of thematic elements that people can identify with the movie, and most of the lines are from Army of Darkness and Evil Dead 2. So the only difference is seeing it live and getting to be sprayed with blood. … The show is just silly and campy and ridiculous and bloody as hell.”