Carpenter Square Theatre gets into the Halloween season with horror satire Slasher. 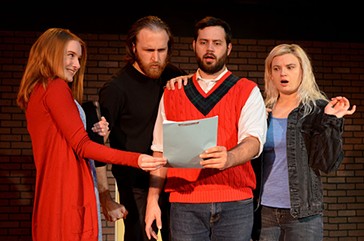 In preparation for directing the horror-comedy play Slasher, director Terry Veal went on a rampage, ripping through episodes of a popular scary TV show on an online streaming service.

“I’ve kind of gotten hooked on American Horror Story,” Veal said. “I’ve been watching this season, but I found that Amazon has all the back seasons, so I thought, ‘Well, I think I’m just going to go back,’ and oh my gosh, I was hooked. I don’t usually binge-watch something, but I did, and I told [artistic director Rhonda Clark], ‘That’s the blood I want,’ when the pool of blood flows across the floor.”

The play, written by Allison Moore, runs Friday-Nov. 3 at Carpenter Square Theatre, 800 W. Main St. Veal said rehearsing for Slasher and staging its gruesome murders has been enjoyable for the cast and crew.

“I think it’s a terrific Halloween show,” Veal said. “It’s a lot of fun and a lot of blood, and we’re having a blast with it.”

Timing is crucial for horror, Veal said, and Slasher establishes a demanding tempo from its very first scene.

“The key is you’ve got to keep it moving,” Veal said. “The pace of the show, it starts pretty high in intensity and it just keeps moving on up. You have to keep moving forward and take the audience along.”

Moore’s script, Veal said, is “written like a screenplay” critiquing and lampooning horror movies while mimicking their style with fake gore and jump-scares. Veal said staging the play’s repeated direction for an “immediate shift” between scenes and sets presents technical obstacles for a small production.

“On stage, it’s hard to instantly switch to anything unless you have a couple of million dollars; then it’s a little different,” Veal said. “It’s multiple settings and things like that, so I’m trying to keep the pace where we go to blackout at the very minimum. That’s the challenge. There’s some technical aspects that we’re dealing with. People getting throats slashed, and I don’t want to give away the big one, but those kinds of things you see in a slasher movie. So that’s a challenge to figure out those kinds of things, but I think we’re doing a pretty good job with it.”

“She’s quite the radical, actually,” said Veal. “So she has a big speech and rants about how women are underpaid and they’re just nothing but sex objects.”

Though the play is satirical, its comedy conceals a “slight undercurrent” of “feminist outrage at how women are portrayed in slasher movies,” Veal said.

“The playwright, I think, wanted to make a statement but not hit you over the head with it, so she’s kind of infused it throughout the play,” Veal said, “but there’s definitely an underlying theme there.”

The play ridicules the kind of horror movie being shot by Marc (Peter Fischaber), a character San Francisco Chronicle described as “a sleazy sexploitation director barely keeping his leer and hands under control.” Marc casts an Austin waitress to star in his film because he has run out of options.

“This director, he’s come back to his hometown because it’s a lot cheaper to film in Texas than it is in California,” Veal said. “He’s hurting for money, so it’s a low-budget slasher flick.”

Meanwhile, film student Jody (Matthew Moreillon) thinks the movie will be his ticket to the big-time.

“He gets pulled into the movie when the lead guy doesn’t show up,” Veal said. He’s just one of those ‘I want to do whatever I can to be in this movie, to help with this movie, because this is going to be my big break.’ So he’ll do anything.”

Rounding out the cast are Sheena’s younger sister Hildy (Hannah Youngblood), who Veal said “tries to keep peace in the family,” and Christi (Jessica Vanek) the assistant director. Slasher also requires Vanek to portray several different victims throughout the course of the play, contributing to its comedic tone but also posing a challenge for Vanek and Veal.

Though Slasher contains violent scenes, the goal is usually to induce laughter instead of chills, Veal said, but the combination of humorous and horrific can sometimes be tough to get right.

“First of all, it’s a comedy, and when you’re doing a comedy, there’s certain comedic techniques that you use, so we try to incorporate those as well as the thriller and the suspenseful parts and, you know, ‘What’s coming next?’” Veal said. “So it’s a nice little balance. People will have a really good time and maybe a jump or two as well. … There are visions of Carrie, there are visions of you name it. We’ve been having a lot of fun with it though. And you would think, ‘Slasher? That doesn’t really sound like a comedy,’ but it’s really quite funny.”

Along with the laughter, there will be blood.

“We’ll have to mop and clean pretty much every night,” Veal said.