Blue Man Group is celebrating its 25th anniversary. Three friends in Manhattan’s Lower East Side launched the troupe in 1991 with their street “disturbances.” The group grew into small shows and then theatrical productions and eventually gained worldwide attention, releasing music albums and opening in theaters across the globe.

Blue Man Steven Wendt, who will perform in Oklahoma City, has been with the group for four years. Originally from Kansas City, Missouri, he graduated from California Institute of the Arts in 2009 and worked in experimental theater and as a puppeteer for Cartoon Network and Kids’ WB before joining the show.

“I collaborated with some former members on another project, so it was on my radar as a cool show,” Wendt said. “I auditioned for it, and it was an arduous callback process; it was three days. They offered to train me, so several months later, after taking several drum lessons, I went up to New York and trained and ended up starting in the show.”

“It’s been 25 years, but it’s still a current show; the creative team has kept everything up-to-date with commentary on art and culture today just as much as when the show was created,” Wendt said. “Because we don’t use language — we’re nonverbal — we can communicate on a whole different level.” 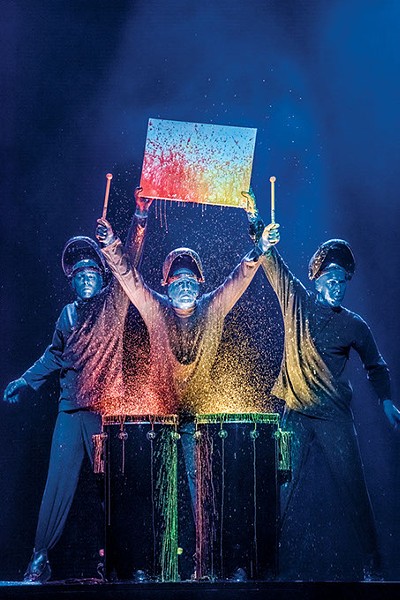 “Each Blue Man acts a little different because it is about who they are as a person, so their characters are inherently different,” he said. “Even though everyone behaves differently, there is still this core way that we can communicate with each other. It’s not a specific language we use; it’s more of a trust, you know? We can trust each other to be there in the moment and to support whatever we’re doing.”

Being a Blue Man is demanding because performers must be actors and musicians and also a “team player,” he said.

“A lot of our show is improv, so it really takes a grounded actor who is able to think on his feet,” Wendt said. “We make it look easy, but every night, we are meticulously picking apart every scene. … We hone in and tighten up our behaviors because that’s our only way of communicating.”

Wendt said that he has learned skills as a Blue Man that help him as a performer.

“I’m also writing music, and I’ve noticed that after doing a show for a while, my approach to music has become more instinctual,” he said. “It’s still very relevant for me as an artist; I love it.”

Blue Man Group has permanent productions in five U.S. cities, plus Berlin, and two touring companies. Wendt estimated there are 40-50 Blue Men populating the world at any given time. For more information, visit blueman.com.

Print headline: Body language, What started as a three-man ‘street disturbance’ in New York has transformed into a wordless worldwide sensation.