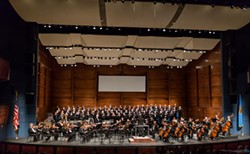 The high, lonesome sound of bluegrass isn’t typically filed under “classical music,” but Randi Von Ellefson, professor of music at Oklahoma City University and artistic director of Canterbury Voices choral society, said that might just be a matter of perspective.

“It depends on how you define classical,” Von Ellefson said. “It’s not dead white European composers, if that’s the definition of classical music; that’s not what it comes from. But bluegrass is its own kind of tradition. It certainly comes from a gospel tradition. I mean, there’s a lot of mixing of early Appalachian church music and of shape-note singing and all these things.“

“Bluegrass and classical music don’t really line up that well or naturally with an ease,” Dillingham said. “It has to be a very fine intention to make that work by a talented composer.”

The program for Bluegrass and Blue Jeans culminates in composer Carol Barnett’s A World Beloved: A Bluegrass Mass, a half-hour work Dillingham described as one of the only pieces of music he could think of that elegantly combines bluegrass and classical music. He and Horseshoe Road previously performed the piece with the Edmond Community Chorale.

“When Canterbury Voices called us and asked us if we would be interested in performing, it was so exciting,” Dillingham said, “because I remember the work we put into learning that piece and really making it our own. We felt it was something we really wished we could do again. It’s an awesome piece of music and very exciting for the audience.”

A World Beloved is extremely challenging for the performers involved, he added, but it’s also extremely satisfying.

“What’s really tricky about this piece and demanding for the instrument ensemble is you really have to switch back and forth at times, where now I need to play very classical, I need to play real violin, and then suddenly flip into this thing where I’m out under a tree, having a jam session at a bluegrass festival in western Oklahoma,” Dillingham said. “What that means is that no two performances are going to be alike. There’s room for the piece to truly be alive and give every audience a fresh experience. I really don’t know of any works quite like this one.”

Though A World Beloved is a distinctive composition, Von Ellefson said getting ready for the performance is very similar to any he has conducted in his four decades of experience.

“It’s the same problems of preparation that I deal with every time I do a concert,” he said, “which is that people have to get inside the music and get inside the style. So if they are unfamiliar with the style, it takes a little more time. … If we’re doing a Mozart piece, it must become something that lives for us, but it’s Mozart’s work. Same thing with Verdi’s Requiem or a contemporary piece. How do we make it feel like we’ve lived in that world?”

“Traditional bluegrass is much more improvisatory and not specifically written out,” Von Ellefson said. “That would be the problem if you’re writing something for choir. You can’t just get a 120-voice choir and say, ‘OK; now just improvise on this.’ They’ve got to have notes.”

Though the choir’s vocal arrangements are meticulously noted, Dillingham said some portions of the composition allow instrumentalists room to improvise in the bluegrass tradition.

“But what’s marvelous about A World Beloved,” Dillingham said, “is that the composer really pulls these things together and takes the form of that classical mass and just delicately weaves in the bluegrass idiom and even requires at some points that the ensemble … naturally play from their instincts in that bluegrass style. … It needs that interactive, interpretative element.”

Before the mass, the choirs and Dillingham and Horseshoe Road will play more traditional folk and Americana.

“I think it would be important, psychologically, for the audience to hear our music,” Dillingham said, “to hear that true, solid traditional sound … because the way the bluegrass and the classical is blended specifically in this piece, if you don’t have that context set initially, it might be skewed and changed the experience.”

Canterbury Voices’ Moore youth choruses are scheduled to perform before the evening’s program begins, and an exhibit from the American Banjo Museum will be on display. And as the event’s name suggests, Von Ellefson said, casual attire is encouraged.