Babble puts customers in control of build-your-own bubble tea and much more. 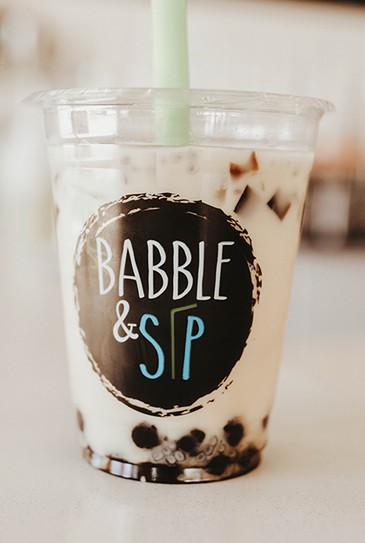 Husband and wife Tuan and Lisa Le are trying to do more than redefine the word Babble with their business; they’re also trying to change the concept of a neighborhood cafe by combining coffee and bubble tea.

The definition inside the 6909 W. Hefner Road, Suite B12 location presents Babble as a verb: when you gather with your friends at your neighborhood cafe and can’t stop talking excitedly.

The family-owned business is focused on providing good customer service while introducing a build-your-own-boba concept to an area of the city that doesn’t have as much exposure to the Asian-style drink.

Tuan Le grew up in northwest Oklahoma City and attended Piedmont High School. Some of his fondest memories were running up and down the sidewalks of the shopping center where his parents own and still operate Speedy Wok, 11122 N. Rockwell Ave.

“When you see [16th Street] Plaza District and Midtown are popping up and people are taking chances, we want to be in that conversation and growth,” Tuan Le said of northwest Oklahoma City. “People shouldn’t have to go to the Asian District just to get boba.”

Boba — or bubble tea as it is often referred to in the U.S. — was invented in Taiwan in the 1980s by combining sweet tapioca balls (boba) with blended teas. Babble offers in-house flavored boba in addition to a variety of jellies that can be added to four varieties of flavored milk teas, coffee and sweet caffeine-free fruit drinks called refreshers.

“Ten years ago, people were just starting to be introduced to pho, and now everyone knows what it is,” Le said. “Bubble tea is a growing trend.”

Teas are brewed in-house and infused with a non-dairy creamer. Customers choose their size of cup and head over the BYOB (build-your-own-boba) station to add boba pearls, jellies and other ingredients before adding ice and their choice of milk tea that includes flavors like wintermelon and specials like hazelnut in addition to the house-blend milk tea. Babble offers sample cups so customers can try each flavor of tea and refresher.

“We want you to explore outside the box,” Le said. “If you ask us, ‘Can I add this to my drink?’ If we have the ingredients, we can make it happen.”

Babble also offers a wide range of coffee drinks made with Tulsa-based Topeca Coffee Roasters and hot tea drinks like London Smog, which takes the traditional London Fog blend of steamed Earl Grey with milk and adds a shot of espresso.

Blended smoothies and slushies are also available and are flavored with more than 15 options including fruit like mango and strawberry but also sea salt caramel, taro (purple sweet potato) and red bean.

To complete its cafe ambiance, Babble offers sweet and savory food options. Customers can snack on three kinds of popcorn chicken served with a sweet soy glaze or steamed or pan-fried dumplings.

For sweet options, Babble sells macarons from Belle Kitchen and a few other outsourced bakery options. It also sells Braum’s ice cream that can fill a sweet waffle that tastes like a fortune cookie and has a honeycomb pattern. It also has mini Babble Boxes, which are a smaller version of Japanese toast boxes. Sweet Hawaiian rolls are hollowed out, toasted and filled with the customer’s choice of ice cream, fruit and candy options.

“We’re concerned with quality in everything we do, and it’s hard to go wrong with the quality of Braum’s ice cream,” Le said. “Throw [in] some strawberries, something fun like Frosted Flakes, and it’s a fun treat.”

Since opening in August 2017, Babble is a dream come true for Le, who made the difficult decision as his parents’ only child to branch out from his family’s restaurant business, but he didn’t go too far. Babble is located in a shopping center in the same block as his parents’ restaurant.

“My dad wanted me to take over [at the restaurant] eventually, but I told them, ‘I learned a lot from you. You’ve done a great job,’ but I wasn’t passionate enough in the kitchen, and I loved to own a business one day. It was my dream. I learned how to grind it out at work and be the best man that I can be from a family standpoint, which is what he provided to me.”

His wife Lisa — who is a graphic designer — helped design Babble’s colorful interior and devise its mascot, a night owl named August, after the month in which the cafe opened and in honor of the late nights they spent working on the concept. The owners and customers lovingly refer to the owl as Auggie.

“Before we went into it, we dreamed of working together,” Lisa Le said. “It hasn’t always been easy — we just had our son three months ago — but we enjoy our time together. For us, we’re building our dream together, and it’s really cool.”

The cafe originally opened as Babble and Sip, but they received a cease and desist notice from a coffee shop and bakery in New York City named Bibble and Sip, which federally trademarked the name and operates under B&S LLC.

“I felt like if I was going to pump $10,000 [in lawyer fees] to keep my name, I’d rather put that into the business,” Tuan Le said.  “If I were to open another Babble across state lines and applied for federal trademark, we could run into problems. We could’ve won, but there was no reason to take the risk. People were referring us just as Babble anyway.”