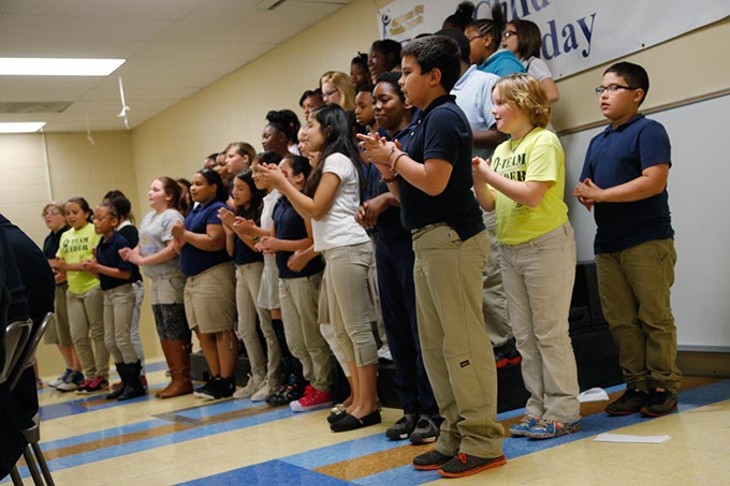 As Oklahoma City Public Schools looks to reverse its trend of high suspension rates, Bodine Elementary, a low-income and culturally diverse school in southwest Oklahoma City, offers an example of the transformation sought across the district.

“It was very frightening,” said principal Nikki Coshow about her first year at Bodine in 2012, when the school was issuing nearly 500 suspensions a year, mostly due to violent behavior. “It was just chaos. There was no learning.”

Coshow, who was an assistant principal that year at Bodine, was approached by 10 teachers — out of nearly 40 — who said they were willing to stay and help move the school forward if she would become the principal, which she agreed to do. Fast forward to this year and Bodine has issued fewer than 20 suspensions, even with 200 more students than were there three years ago. There are also no teacher vacancies headed into next year, as “teachers just don’t want to leave,” Coshow said.

“It serves no purpose,” Coshow said about suspending students and sending them home for three days.

Coshow said that Bodine launched a parental training program to help give parents “more tools in their toolbox." A team of parents, teachers, administrators and students meet when behavior issues arise to discuss what is causing a student to act out, and students were invited to participate in the process of raising standards and setting goals.

“Believe it or not, fourth-graders have a lot to say about the changes that need to be made,” Coshow said.

Bodine also looked beyond its walls for help and found willing partners in local churches and businesses. Members of Bryant Avenue Baptist Church down the street began to volunteer; Frontier State Bank donated coats and playground equipment, along with coins to hand out to students modeling good behavior; and Republic Services, Inc. planted trees and purchased a new marquee sign for the school.

“Bodine is a model of what can happen when the entire community steps up and takes responsibility for our kids,” Superintendent Rob Neu said.

Bodine also launched Boy Scouts and Girl Scouts programs, started a track program and plans to launch a Saturday science class, thanks to a grant from Devon Energy.

The school has also taken part in The Quaglia Institute for Student Aspirations, a program brought to the district by Neu. Quaglia focuses on a student’s personal goals and aspirations.

“That has been one of the biggest components [to the turnaround],” Coshow said about the Quaglia program. “If you could take a snapshot of what’s in every child’s heart, that’s where we start.”

Nearly every Bodine student is on free or reduced lunch, and 75 percent of the student body is African-American or Hispanic. Bodine is located in a low-income part of Oklahoma City, and school leaders said it had transformed from a black eye to a source of pride.

“This school can now be the center of this neighborhood,” Ward 4 Councilman Pete White said Monday at a ceremony celebrating the change.

Walking through the halls, Coshow is able to point out students who have stories of great academic gains over the past few years. However, the state labeled Bodine an F school in its annual report card system last year.

Coshow said the school has a lot of special needs students who were not appropriately identified just a few years ago. But despite those students now receiving specialized attention, they take the same state tests as those students in a gifted program.

“We tested all of our kids this school year in small group settings so they would have the best chance to be successful,” Coshow said. “I think this was probably the first year that the kids in this building have taken it seriously.”

It will still be several months before Coshow and her team of teachers learn if the change in environment will lead to a higher academic results on the state tests. But she already sees growth just by walking down the hallways and hearing students speak positively about their experience at Bodine.

“These are great kids,” Coshow said, “because they are our kids.”