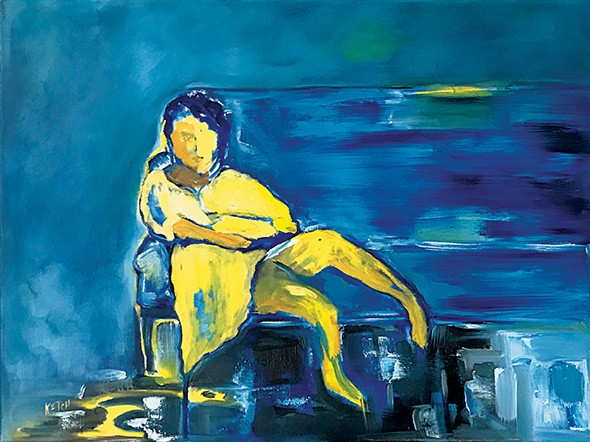 I, Doppelgänger and Fem Form

I, Doppelgänger — on display through Jan. 10 at Mainsite Contemporary Art, 122 E Main St., in Norman — features paintings by Mary James Ketch and Alexis Austin. Fem Form, an exhibition of photographer Greer Inez’s work, is also on display through Jan. 10. Like countless artists before them, Ketch, Austin and Inez have drawn inspiration for the works in their exhibits from the human figure, primarily the female form.

“It’s something that people have been painting since the beginning of time,” Ketch said, “but I questioned, ‘Why do I draw and paint the female figure so often when, historically, men have painted women?’ I’m a heterosexual female; why am I not painting men? I realized it’s not about sexual attraction or anything. I find inspiration through women and their lives. It’s more about entering into this experience of being a woman. … I think the female form is beautiful. … The experience of being a woman, I think, is beautiful.”

While artistic interpretations of the female body created from the male gaze often sexualize their subjects, Ketch identifies with hers, making them relatable to the viewer.

“A lot of people look at my paintings and say, ‘Oh, it really connected with me,’ and they’re not being connected in a sexual manner,” Ketch said. “They’re just like, ‘I feel what you’re feeling.’ They always say, to me, ‘I can’t explain it,’ or, ‘I don’t know why, but I really connect with this painting.’ I think that’s because I start from an emotion or an image, and then I just paint it and assume someone else is going to connect with that, as well.”

Inez, who uses a combination of acrylic, oil and encaustics to paint on photographs shot with a 35mm camera, said she finds aesthetic inspiration in the curvier shape of the female form. As a woman photographing women, Inez said her relationship with her models might have a different dynamic.

“I don’t ever want to say that a man can’t photograph a woman as well as a woman can photograph a woman, but the camaraderie is helpful. I do believe that very much,” Inez said. “I notice things in women because I’m a woman. We have common insecurities as women. ... We just know each other. There’s an intuition there.”

Rather than referencing live models or photographs, Ketch, inspired by French abstract expressionist Henri Matisse, paints scenes created with paper cut-outs. She also studies evolutionary psychology to discover common human characteristics and experiences in hopes of making art “a human being, no matter where they are in the world, can understand.” For Ketch, that means making the abstract accessible.

“When it’s abstract, I think they can read more into it themselves, but that also makes it more complicated, and people often just sort of walk away from things that they can’t understand right away,” Ketch said.

Austin, who often paints on different fabrics such as tulle and silk, which she sometimes treats with dyes and bleach, has just recently become interested in people as a subject. Working on the paintings for this exhibit has helped her let go of her “hang-ups with painting figures.” Even when depicting human figures, Austin’s work often retains abstract elements, especially after she attempted to move away from female subjects.

“It’s always women all the time, the female figure, so I really wanted to challenge myself with trying to incorporate men in there,” Austin said, “but instead of that really happening, I kind of got more abstract as far as the human figure goes, so I ended up with some kind of like sexless human figures, so they’re neither male or female. … The bodies are just kind of more blobs, but I’ve had people look at it and just kind of assume that they’re one gender or the other. … They just interpret them however they will.”

Some of Ketch’s figures appear more identifiably female, but she said she has been surprised at how many men seem to relate to them anyway.

“I have a painting that I just assumed men would hate it, actually,” Ketch said. “It’s a woman cleaning dishes, and it’s not abstracted that much. … Men at the show came up to me and said, ‘I love this painting.’ … I just thought they would pass it by; they wouldn’t relate to it. It’s sort of about the contemplative nature of housework and drudgery.” 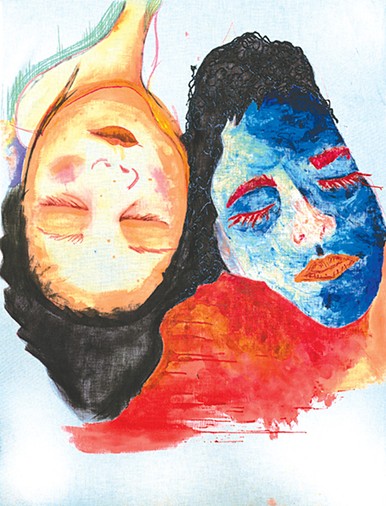 Ketch, who has a master’s degree in film from University of Southern California, began teaching herself to paint 12 years ago after the birth of her second child.

“I really think that being pregnant changed my brain,” Ketch said. “I just started seeing faces in everything. You can’t get through a meal without me being like, ‘Don’t you see the goat in your mashed potatoes?’ … The brain definitely reorganizes itself. I had a lot of time breastfeeding, sort of meditative time. I kind of had to shift my whole way of being. I couldn’t focus enough to write after my kids were born because to write, it takes me, like, an hour just to figure out what I’m doing. With painting, I could do it while my kids were napping, and I could kind of come in and out of it quickly, which I can’t do with writing. At first, I started in acrylics, but I would start to paint and then I’d be called away to get a snack or something, and my paint would dry up. So I moved to oil because I can set up my palette, walk away and come back, even the next day, and it’s still fine. So that was also definitely influenced by having kids.”

According to her artist statement, Inez, who grew up admiring her father’s charcoal drawings, began photographing mothers “to celebrate the strength in their bodies through imagery” after becoming a mother herself.

Austin, who studied studio art at Oklahoma City University and fashion design at Columbia College Chicago, said her art is influenced by her children.

Though Austin’s figures are abstract, she said a painting having multiple subjects means they have “a relationship that you have to figure out when you look at it,” whether that’s “four curvy blobs” who convey maternal understanding or “two people that are staring at each other like, ‘What the fuck are you doing?’”

“They all kind of revolve around love in some way,” Austin said.

Even when Ketch plans to paint a different subject, she often finds herself returning to maternal themes.

“I really hadn’t sketched it out or anything,” Ketch said of a recent painting. “I was just painting directly on the canvas. And my idea was to do a grouping of women with teacups in their hand, and by the time I was finished, it was a mother with two kids. I just started laughing, and I’m like, ‘Of course it is.’ I can’t escape who I am and what’s in my life.”