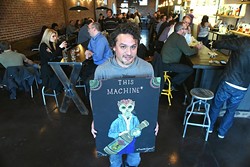 If necessity is the mother of invention, then kittens are the din-din of virtual popularity.

From Grumpy Cat to “I Can Haz Cheezburger” and every feline walking over piano keys in between, it seems like the best way to achieve instant Internet success in this 15-minutes-of-fame world is through the comical exploitation of cats.

It’s a bizarre trend that local artist Anthony Pego (aka Boo Science) unexpectedly became swept up in recently when several of his doodles — which transformed politicians like Mary Fallin, Joe Dorman and Sally Kern into quirky, feline-faced caricatures — piqued the interest of several alternative and political news reporters.

“I do think it’s funny; otherwise, I wouldn’t do it,” Pego told Oklahoma Gazette. “I understand wanting to let your brain rest from the seriousness, but … becoming part of this Internet cat culture totally blows my mind.”

The 36-year-old inadvertently woke a sleeping kitty after he posted a handful of the sketches to his booscience.com website as a way to celebrate his own birthday.

Taking his cues from headline-grabbing politicians across the country, he used a simple stylus tool and his Samsung Galaxy S5 phone to create watercolor-like portraits of New York City Gov. Andrew Cuomew (the baseball card-like bio beneath it says, “Banned human baby soul-stealing”) and U.S. Sen. James Lankpurr, R-Oklahoma (“Thinks being a dog is a choice; Chairman of the Subcommittee of Ankle Attacks”), among others. Within days, New York bloggers were calling. Then came The Washington Post, MSNBC, ABC News and more. 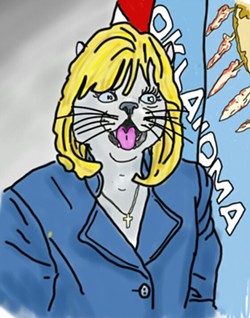 “Not sure what to make of this,”

For years, Pego has developed a small and loyal local following with upcycled art, including his line of Boo Science jewelry made from found objects and vintage coins and his monster-inspired furniture. Both are difficult for him to do in winter months, he said.

“This winter is the first winter I’ve really decided to focus on painting and other skills instead of taking downtime,” Pego said. “It was meant to be nothing more than a time-killer and wasn’t supposed to be something I considered part of my portfolio.”

There was no strict message behind it — no politics, no partisanship, no agenda, no attempts to sway anyone to any side of the aisle — except for all-out adorableness.

“Part of the deal was just developing a style in the digital realm that is a little new and a little different,” Pego said.

He also credits his upbringing as an inspiration. As a youth, his home was filled with politics. In the 1990s, his dad, Rick Moore, was assistant to OKC Mayor Ron Norick through the Oklahoma City bombing and the first MAPS projects. Having an “earful of goings-on” about the political realm, Pego always wanted to become more informed about politicians and the stories that came across his news feeds, all in an effort to hold himself “more accountable to the voting process.”

As his output of purrfect politicians grows, so do his accolades, most notably for his ability to combine the human essence of his subjects with the petability of a mouser. It’s a process that he has practically mastered over the past few weeks.

“I started to imagine these people drawn as cats; it wasn’t hard,” Pego said. “The anthropomorphism of cats really … made me laugh. And the more it was applied to people like celebrities and politicians in my head, the funnier it got.”

His process is simple. He studies photos of his subjects — both people and pets — before sketching the features that he believes makes them different and charismatic.

“I don’t really select the breed ahead of time,” Pego said. “I just kind of let their imagery do the job. And then, from there, it’s like, ‘Oh, he’s a tabby!’ … It just all sort of falls into place.”

As excited as Pego is about the hubbub surrounding his artistic explorations, he admits that he’s dumbfounded that this is what caught on with hundreds of thousands of people.

“While I have been on the Internet since the text-only days, I never considered myself one of those people who were obsessed with the mockery of memes,” he said. “But if you want to take my images and laugh at them for little while, I’m more than happy to produce more.”

The success brought a recent request from the owners of Oak & Ore to “catify” Woody Guthrie for a one-off tasting of Marshall Brewing Company’s Pineapple Express, a fruit-infused version of its This Machine IPA, which is dedicated to the memory of the Oklahoma-born folk icon.

Indeed, this cat is bound for glory.

“Maybe that’s what the best type of work is made out of: those periods where you’re relaxed just because you love it and it’s there,” Pego said.