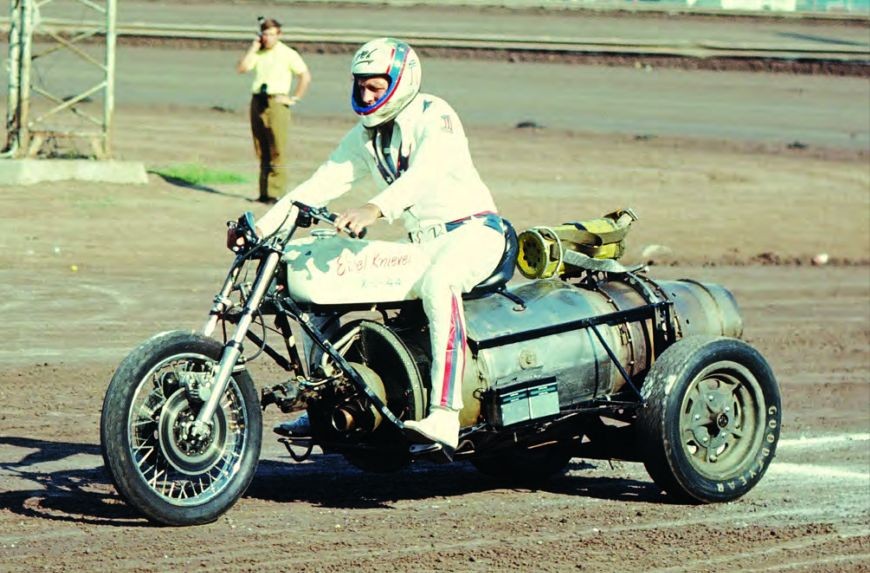 In the 1960s and 1970s, a new type of hero rose to the forefront of American culture, capturing the hearts and imaginations of a nation looking for the perfect post-Vietnam War icon.

His name was Evel Knievel. Mounting his patriotic-themed motorcycle, he inspired countless throngs of gawkers by jumping buses or canyons or whatever else was put in his way. He was a true American success story.

Knievel made numerous trips to Oklahoma in his heyday, but one special trip is being commemorated in the new book Evel Comes to Cooperville by Los Angeles author Garrett Colton (brother to local musician Graham Colton). Though he said Knievel’s visit to the Sooner State was “before his time,” the inspiration for the book came from his grandfather, Jack Colton, who was instrumental in bringing the daredevil to Oklahoma City.

“Evel was a guy that did whatever he wanted, and people were receptive to that,” Colton said. “Some were jealous, envious, in awe of this guy that was a reckless hellion that was always pushing himself and doing things his own way. From talking to other people that were involved in the event, they said Evel was sort of in awe of my grandfather, and it really is something I can picture. He’s a special guy, and people gravitate to him.”

The book will be celebrated Saturday when Weldon Jack, 3621 N. Western Ave., hosts a special release party that starts at 1 p.m. with a motorcycle run to the legendary Pops on Route 66 in Arcadia.

Upon return to Weldon Jack, the celebration continues at 6 p.m., showcasing photos of Knievel jumping over objects on his motorcycle at the Oklahoma State Fair Park in 1972, as well as a book signing and general nostalgia of a time when a man could become a national treasure by leaping 50 school busses on a motorcycle.

Weldon Jack owner Jerrod Smith, a longtime fan and admirer of Knievel, knew after hearing the story of Colton’s grandfather that his business, named after Smith’s own grandfather, would be the perfect place to showcase this literary effort; both men believe in “honoring superheroes.”

“Evel was once quoted as saying, ‘I decided to fly through the air and live in the sunlight and enjoy life as much as I could,’” Smith said. “Art, culture, creativity, community; these and other things are the things we feel shed sunlight on humanity and allow people to enjoy and embrace life. We always try to position ourselves closely to people so we can inspire and offer great services to the folks in OKC. We expect a good crowd and a great mix of people talking bikes and enjoying drumming up the past.”

For Colton, however, the real star of the show is his own grandfather.

He believes the book and the show are a “small token of appreciation and a thank-you to him for always being ahead of the curve and beating his own drum.”

He added that both his grandfather and Evel came from a long-lost era of inspirational men who played by their own rules, something that, in this day and age, is perhaps an outdated ideal.

“I don’t think there will ever be another Knievel,” Colton added. “Unfortunately, my generation is more prone to producing a Justin Bieber over a Knievel.”